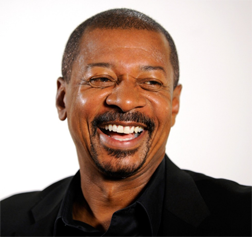 “Ain’t No Mountain High Enough” – the Motown classic is the perfect song to describe Hollywood icon Robert Townsend. Townsend started out as an extra in movies and has since become a heralded actor, comedian, writer, director, producer, and cable network programming CEO. That’s not so bad for a kid from the west side of Chicago who was raised by a single mom of four children on welfare. Never satisfied with his own success Townsend continues to overcome even greater obstacles and climb even bigger mountains in the entertainment industry.

How would one describe Robert Townsend? A talented actor, Hollywood trailblazer, passionate visionary, or just a regular guy seeking to make a difference, these are all phrases that apply to the multitalented entertainer. Townsend is the last of a rare breed of artists that scrutinizes every word and syllable that is expressed in his work. It’s no wonder that so many people regard Townsend’s body of work as classics. A Hollywood pioneer well ahead of his time, Townsend, is often referred to as one of the "Godfathers of the Independent Film World.” With more than 30 years in the entertainment business, he has made an indelible mark in Hollywood with an extensive list of credits.

Robert’s genius first revealed itself in elementary school. As a kid Robert was always fascinated with television, watching and studying it tirelessly, he began to practice acting out scenes and impersonating famous characters. At his school during a reading of Shakespeare’s Oedipus Rex he dazzled the class with his ability to transform effortlessly into character, and as a result Robert’s remarkable adaptable talent as a young actor was born and caught the attention of Chicago’s X Bag Theatre (the Experimental Black Actors Guild). Robert made an unforgettable mark in his hometown of Chicago, then he took the next step and where went to New York and became a regular at the Improvisation, the renowned comedy club, which jump-started his career as a stand-up comedian. Then for Robert it was on to Hollywood, where he dabbled in a mixture of industries and found that with his undeniable talent, he was able to adapt easily from being a comedian to working as an actor on the silver screen.

Robert’s first film appearance was as an extra in the urban classic, Cooley High. His break came while performing on various television comedy specials including “Rodney Dangerfield: It‘s Not Easy Bein’ Me” and “Uptown Comedy Express.” Although comedy had been his forte during the early part of his career, he knew he was destined to be on the big screen. He landed the role of a lifetime co-starring opposite Denzel Washington in A Soldier’s Story, and appeared with Diane Lane in Streets of Fire and Kevin Costner in American Flyers.

Once in Hollywood, seeing the difficulty black actors had and the lack of good work available in the film industry left a burning desire for Robert to step behind the camera. With his acting career in high gear, Robert’s career took a turn for the best when Robert Townsend the “independent filmmaker” was born. He wanted to do something to fill this void. Without formal film education or outside funding (using his own credit cards to finance), Robert wrote, directed, produced and starred in his own first film. The result was the critically acclaimed, Hollywood Shuffle, a satire depicting the trials and tribulations of black actors in Hollywood. The success of this film forced Hollywood to recognize and appreciate the visionary and multifaceted talent of Robert Townsend, Tinseltown’s newest, talented actor and filmmaker.

Following the success of Hollywood Shuffle, film projects continued to pour in. He was soon directing Eddie Murphy in Eddie Murphy Raw. His next film endeavor was the inner-city fable: The Meteor Man that he also wrote, directed and starred in, was another huge success. The stellar cast included James Earl Jones, Bill Cosby, and Eddie Griffin. As a filmmaker, director and producer, his unbridled success continued.

The movie that landed Robert the credit of a lifetime was the popular soul musical The Five Heartbeats, a semi-autobiographical piece, reminiscent of the 60’s R&B male groups and the up’s and down’s of the music industry. This classic continues to be a favorite among audiences and one of the most talked about films in the industry. In between features, Robert created and produced his ground breaking Cable Ace award-winning “Partners in Crime” variety specials for HBO and highly praised “Townsend Television” for FOX television. He also created and starred in the WB Network hit series “The Parent ‘Hood”.

Townsend has made history by being nominated for more than 30 NAACP Image Awards for film and television. At the 2001 NAACP Image Awards he directed three performers nominated in the best actor/actress category in three different films: Leon, for his role in NBC’s Little Richard, Alfre Woodard in the Showtime Movie Holiday Heart (which also garnered her a Golden Globe nomination) and Natalie Cole for her gripping self-portrayal in Livin' for Love: The Natalie Cole Story (for which she won the coveted Image Award for best actress).

Townsend continued to helm films for the small screen including: Carmen: A Hip Hopera for MTV Films, starring Beyonce Knowles (one of the highest rated programs for MTV) and Image Award winner, 10,000 Black Men Named George for Showtime, a highly acclaimed period piece about the Pullman porter strike, starring Andre Braugher, and Charles Dutton. Robert has worked with some of the top talent in Hollywood including: Ossie Davis, Ruby Dee, Denzel Washington, Halle Berry, Morgan Freeman, Alfre Woodard, Lou Gossett, Jr., Keenan Ivory Wayans and Chris Tucker, just to name a few and is responsible for discovering many of Hollywood’s A-List talent before they became household names. He is the mastermind behind many of Hollywood’s favorite and best-remembered movies and hit series. Robert’s body of work has been seen on various networks including Disney, Fox, NBC, HBO, WB, The N, USA, Nickelodeon and MTV.

While he has many accolades none are more important than his family. His four children are the center of his heart. Following in his footsteps, are his 3 daughters; Alexia, Sierra and Skylar aka "The T Unit." They have received their first TV credit for the "B5 Christmas Special" which aired on the Black Family Channel, a concept they came up with and pitched to their father. Despite his demanding schedule, Robert makes sure he spends quality time with his son, Isaiah and his three daughters. Time with Robert Townsend the dad is no ordinary experience, his children are blessed with a father that makes every experience they have unique, creative, fun and sometimes very unpredictable...but one thing they can count on for sure is…. plenty of good times and a lot of love.

Always a pioneer Townsend took the helm as President and CEO of Production for The Black Family Channel (BFC) creating and spearheading production for BFC’s top-rated shows. Where he ran the cable network for four years before it was sold to the Gospel Music Channel in the Spring of 2007. During his reign, he created unprecedented original programming for the network. Showing his unstoppable genius, in his short time as a television executive Townsend reached several milestones; he created more than 15 new shows for the network with limited financing; of which two shows were nominated for a prestigious NAIMC Vision Award (National Association for Multi-ethnicity in Communications), The Thou$and Dollar Bee and Lisa Knight and the Round Table), and he was voted one of the Most Influential Minorities in Cable by Cable World Magazine.

Since his departure as president of the BFC, Townsend is as busy as ever acting, directing and producing. Townsend has recently returned in front of the camera to star opposite Angela Bassett in the faith based film Of Boys and Men, to be released by Warner Bros. DVD division. He has also just completed directing Golden Globe winner Ving Rhames in a biopic about the troubled boxing legend Sonny Liston entitled Phantom Punch. Townsend has also released Why We Laugh, a documentary on the history of African American comedians from slavery to present, including interviews with such legends as Bill Cosby, Dick Gregory, Chris Rock and the Wayans. The film received critical acclaim at the 2009 Sundance Film Festival.

Never one to waste time Townsend is also writing a feature film and is working on a one-man show about his childhood in the rough ghetto of Chicago’s Westside called The Journey Of Left. As a Hollywood icon and humanitarian, Townsend's mission is to create quality programming for everyone to enjoy and to create a classic body of work that would be timeless.

Townsend loves creating and taking chances. In 2009, he rolled the dice with a show entitled, “The Musical Theater of Hope,” that mixed elements of the classic anthology series “The Twilight Zone” with Christian themes. The inspirational show aired on the Gospel Music Channel to rave reviews and garnered some of the channel’s highest ratings.

His latest mountain has been figuring out a way to create content in this new digital age by way of the Internet. His first web series, “Diary of a Single Mom” is blazing the media landscape and introducing the world to the future of broadcast media to the World Wide Web. The series, which follows the story of three single mothers trying to make ends meet in the real world, has garnered much attention and has already made history by winning numerous awards including, “Web Series of the Year.” The show stars Monica Calhoun (Love and Basketball, Sister Act 2), and silver screen legends Richard Roundtree (Shaft, Seven), and Billy Dee Williams (Lady Sings The Blues, Star Wars Episode V, The Empire Strikes Back) and features Leon (The Temptations, Little Richard).

Additionally, Robert Townsend is on tour with the Ultimate Pitch Master Class presented by Film Life, Inc. The three-hour session is designed to teach those seeking careers in film and television how to pitch their ideas to networks and studios. Townsend shares his technique from concept to development, through the various stages of rewrites and pitching to studios as well as providing advice on how to close the deal with clarity, precision and confidence.

Although busy as a performer and filmmaker, Robert always makes time to participate in humanitarian efforts and speak to various organizations around the world. As a longtime speaker for the United Negro College Fund and the NAACP, his concern for inner city youth takes him throughout the country to inspire young people to follow their dreams. In addition, Robert shares his business expertise with various Fortune 500 companies. Townsend has been affiliated with Family Foundation an organization created by Lowell and Michael Milken to recognize outstanding educators in the country, and stress to children the importance of education and respect for teachers. He has traveled with The Milken Family Foundation to Chicago, Boston, Sacramento, Philadelphia, Washington, DC and Los Angeles to recognize deserving teachers and inspire and motive students around the country.

Looking to give back and make an even bigger imprint on the movie industry and the community as a whole, Robert Townsend has created his 501 (c) 3 non-profit, The Robert Townsend Foundation, as a venue to inspire, create and fund new film content and set up a new distribution model. The foundation’s mission is to open the doors to new and underrepresented artists and create a new model to showcase the new filmmakers to the world.

“I am truly blessed to do what I do,” said Townsend. “And as I write this next chapter of my life I will bring my ‘A’ game like never before, with more zest, more passion, more vision, and more love.”