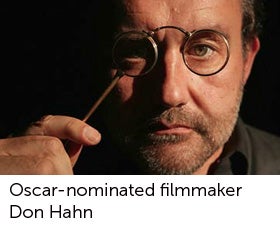 Don Hahn produced the landmark film Beauty and the Beast, the first animated film to be nominated for a Best Picture Oscar ® by the Academy of Motion Picture Arts and Sciences. His next film, The Lion King, remains the highest grossing traditionally animated film in history. Don is Executive Producer of Disney Nature’s Chimpanzee and is currently working with director Tim Burton on a stop motion animated feature, Frankenweenie, due in theaters October 5.

His books, Brain Storm: Unleashing Your Creative Self and Alchemy of Animation: Making an Animated Film in the Modern Age, will be available for purchase, and a book signing will follow the lecture.