THE CSUN GALLERY OF FILM POSTER ART  is the only permanent university gallery in the United States devoted to the art of the movie poster.  It was conceived as a museum-like setting to display the art of the film poster––a largely unappreciated art form.  The Gallery is sustained by the loan of pieces from The Steve Olson Collection of international film posters.  The criteria for poster selection rest on design and illustration, rather than a film’s importance.

A NOTE FROM COLLECTOR STEVE OLSON
I started collecting movie posters in 2005, but when my collection reached a high of 22,000, for the sake of my sanity and that of my wife, I started selling the lesser ones.  I am now down to 7,000 posters from 20 different countries.  The primary considerations in poster collecting are the poster’s age, artwork, rarity, stars, and the quality of the movie itself.  With a confluence of all five criteria you are going to have a very important poster, such as the stunning Bride of Frankenstein––which sold for $334,600 in 2007!  In my collection I have tried to put an emphasis on posters which have great art and perhaps some historical significance.  This brochure illustrates only 11 of the total of 80 posters in this exhibition.  I sincerely hope that you will enjoy this sampling from my collection.

The environment for these cultural treasures is Manzanita Hall, the $16.8-million Arts, Media, and Communication building, designed by Robert A.M. Stern, former dean of Yale University's School of Architecture. Mr. Stern described the new building as a unifier and a catalyst for creative exchange:   "The more people are on the Web, on e-mail, the more faxes are running around the world, the more people are able to accomplish their work at home and deal with their daily lives from there, the more they will need places to come to terms with the inherent reality of human beings."

The film poster ambience for the Cinematheque programming at the Elaine and Alan Armer Screening Room  [Manzanita 100] attempts to create this place.  As historian D. W. Kummel writes:   "The motion picture poster was acquired and cherished for its vague but real cultural delight.  The possession of items of beauty should be seen as serving to elevate the owner or the beholder.  Historical collections reflect and foster owners who are thereby the more humane, more filled with delight, good taste, and understanding of human history, and thus more responsive to one's fellow citizenry and the democratic society that was part of the collective national vision." 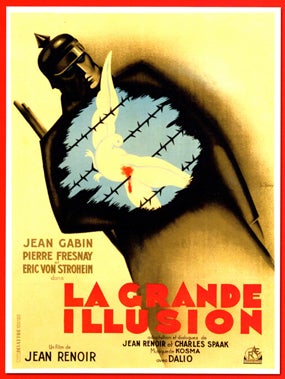 JEAN RENOIR’S GRAND ILLUSION is one of the undeniably great films in the history of world cinema––an eloquent commentary on the borders that divide people, classes, armies, and countries.  During WWI, two aristocrats––the German commander Rauffenstein (Erich von Stroheim) and his prisoner, the French officer Boeldieu (Pierre Fresnay)––share a mirror image of society based on honor and order, a system of mutual respect and protocol linked to years of tradition.  Though their class is doomed by the changes that produced the war, they must act out the rituals of noblesse oblige and serve a nationalism they don’t really believe in.  Hence the grand illusion that somehow class and upbringing elevate these officers above the commonness of war––when bullets don’t know one bloodline from another. 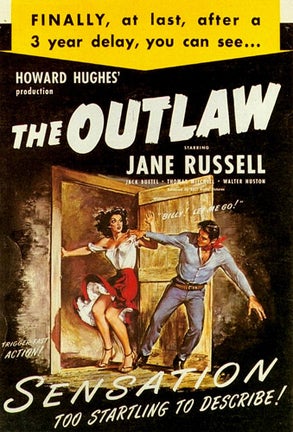 BEFORE JANE RUSSELL BECAME A MOVIE STAR, SHE BECAME A POSTER.  In 1943, Jane Russell spent an afternoon in the studio of noted Hollywood photographer George Hurrell, lounging around in a haystack (provided by Howard Hughes press agent Russell Birdwell) and sucking thoughtfully on a stalk of hay.  The publicity stills of the star-to-be went to Life magazine, were adopted as pin-ups in every theater of war, and Jane Russell was world-famous before she ever appeared on the screen.  This was the first step in the process to produce a master photograph that would serve as the one great publicity image for Howard Hughes’s production of The Outlaw.  The subsequent furor of censorship that this film fomented was unprecedented. 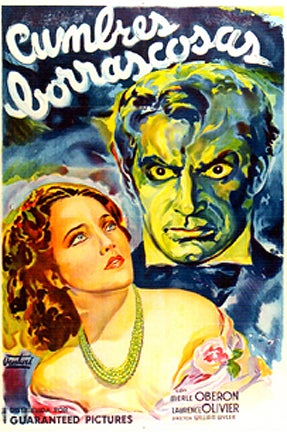 EMILY BRONTE’S Wuthering Heights (1847) is in no way a comfortable novel.  It is a book about ecstasy and loss, written by a young woman disposed to shatter a sensibility called Jane Austen to bits.  William Wyler’s film version (1939) is unsurpassed as a gothic tale of inextinguishable passion, thwarted by social circumstance and mischance.  The novel was always a favorite of the surrealists, and the great Argentinean movie poster artist Osvaldo Venturi captures in vivid and swirling bursts of color the phantasmagoric faces of Olivier and Oberon as the doomed lovers.  Framed against the forbidding wildness of the studio-crafted moors (cinematography by Gregg Toland), the film and the poster are a testament to forbidden or mad love. 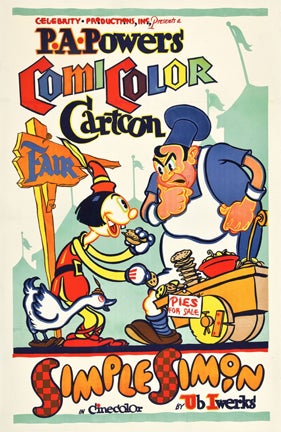 UB IWERKS, one of the most talented animators of the silent and early sound eras, considered by many to be Walt Disney’s oldest friend, was responsible for the distinctive style of the early Disney cartoons and was the creator of Mickey Mouse.  In 1930, he left Disney to start his own studio.  From 1933 to 1936, Iwerks produced a series of shorts in Cinecolor (a two color film process) named ComiColor Cartoons based upon popular fairy tales and other familiar stories (such as Jack and the Beanstalk, Don Quixote, Ali Baba, and Simple Simon).  Lacking financial support, the Iwerks studio folded in 1936.  Iwerks returned to Disney, where he won Oscars for his innovations in optical printing and traveling mattes; later he was celebrated for his special effects work in Alfred Hitchcock’s The Birds.

IN THIS 1933 MUSICAL COMEDY, Eddie Cantor is run out of the small town of West Rome for insulting the petty martinet of a mayor.  He dreams himself into ancient Rome, where, now called Oedipus, he confronts real despots and real danger.  As he moves through Roman society, and having met Princess Sylvia (Gloria Stuart [Titanic]), the torture, bondage, and murder of dictatorship ––combined with a familiar right-hand salute with shouts of “Hail!”––strangely suggest the classical roots of modern European terror.  Racy pre-Code humor evokes the flamboyance of pre-Christian immorality, and a couple of production numbers by Busby Berkeley luridly choreograph the Goldwyn Girls––Lucille Ball and Paulette Goddard among them.  The material is credited to George S. Kaufman and Robert E. Sherwood, who wrote the stage version––and the cinematography is by Gregg Toland (Citizen Kane). 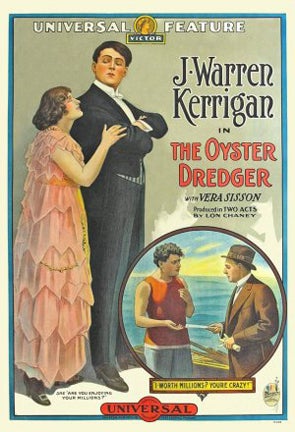 LON CHANEY––surely one of the greatest imaginative artists of silent cinema (The Hunchback of Notre Dame, The Phantom of the Opera)––had been working at Universal Studios as an actor since 1913.  He was given the opportunity to direct in 1915, making six films within a five month period.  In addition to directing, Chaney wrote the scenario for two films (The Oyster Dredger and The Chimney's Secret) and appeared in three (The Violin Maker, The Trust, and The Chimney's Secret).  The Oyster Dredger was his third film he directed.  "A good, interesting picture, well acted and ably directed" noted the New York Dramatic Mirror.  Sadly, none of Chaney's six directorial efforts has survived.

[No. 58 in Exhibition: Part of the "Ethnicity in American Cinema" Series] 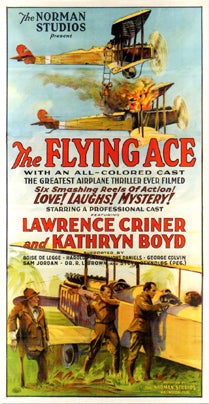 THE OPENING CREDITS STATE:  “Entire Cast Composed of Colored Artists.”  The stars were Lawrence Criner and Kathryn Boyd, two established black actors who received their training with the original Lafayette Players, the influential all-black theatre group founded in Harlem in 1915.  The film played off the headlines of black aviators––including Elizabeth “Bessie” Coleman, the first female African American pilot, and the first African American to hold an international pilot license.  Advertising for the film made the following claim:  “No company making colored pictures has attempted and successfully made a picture like The Flying Ace.” 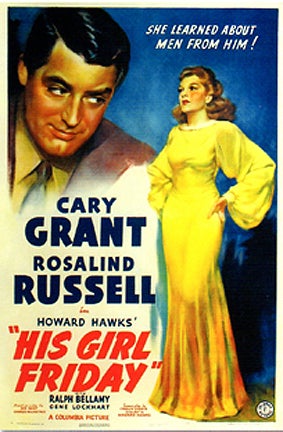 BEN HECHT AND CHARLES MACARTHUR’S classic newspaper play The Front Page has been produced and filmed often all over the world.  But in 1940, Howard Hawks delighted in the ingenious twist of turning ace reporter Hildy Johnson into a woman.  His Girl Friday (now rewritten by Charles Lederer) became the fastest-talking battle of the sexes in the history of the romantic-screwball genre.  Theatrical and stylish, unrivaled for comic timing and snappy repartee, it is a loving tribute to the newspaper business filled with contempt for the ethics of those who work in the business; and it is possibly the greatest of the sublime comedies of remarriage made in Hollywood. 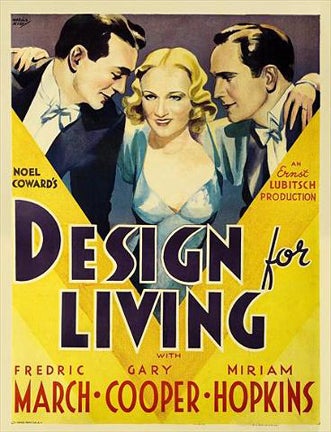 IN 1933, SCREENWRITER BEN HECHT collaborated with director Ernst Lubitsch on an adaptation of Noel Coward’s play Design for Living (1932).  Originally a drawing-room comedy, it became in Hecht’s revision an antic romantic farce.  The infusion of his cynical wit and American energy subtly transformed Lubitsch’s style of European comedy of manners.  The continental characters and situation of two artists in love with the same girl in Coward’s play became a story about American Bohemian artists in Hecht & Lubitsch’s film.  The substitution of a mocking and exuberant slang diction for Coward’s studied wit results in a film that possesses a healthy democratic zaniness essential to screwball comedy. 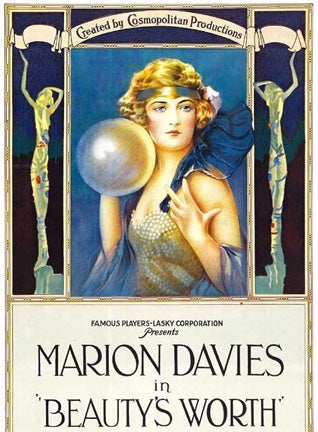 MARION DAVIES was in the Ziegfeld Follies when she met William Randolph Hearst.  She became his mistress and remained so until the great man died in 1951.  Hearst was determined to make her a star, and he founded Cosmopolitan Pictures to produce her films.  By 1919, her movies were being distributed by Paramount.  Beauty’s Worth (1922) is one of eleven under this arrangement.  Davies was not Susan Alexander Kane, the mediocre fictional counterpart that Herman Mankiewicz and Orson Welles conceived for Citizen Kane.  Davies was a genuinely funny actress who did good work, who remained loyal to Hearst, no matter that he had foolishly insisted on putting her in grand and serious roles.

J’ai le Droit de Vivre [You Only Live Once]

J’ai le Droit de Vivre [You Only Live Once] 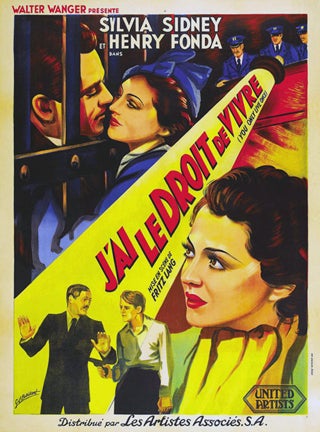 THIS EARLY VERSION OF THE BONNIE AND CLYDE story is perhaps the finest of Fritz Lang’s American movies, and certainly one of the finest American melodramas of the 1930s.  This film is the most magnificent account of malign destiny snuffing out true love and a man’s chance.  Here an average Depression-era couple is made into criminals through circumstances and just plain bad luck.  The young outcasts are seen as innocent victims of the indifference and cruelty of society––a view that the audience of the period readily shared.  Henry Fonda gives a terrific performance as the social outcast fighting for his very existence; and it was once stated that Sylvia Sidney had the face of the Great Depression.  This film is probably the reason. 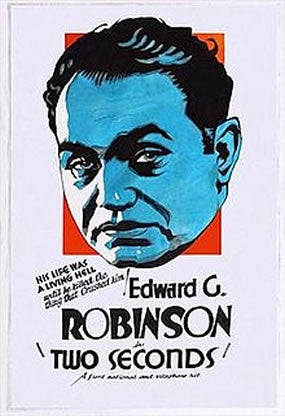 The story’s told in flashback in the moments (two seconds) before the death in the electric chair of John Allen (Edward G. Robinson), condemned for the murder of wife Shirley (Vivienne Osborne).  But John insists that he’s being executed for the wrong crime.  When his best friend Bud Clark (Preston Foster) tells him that John’s wife is being unfaithful, John swings a punch that results in Bud falling from the skyscraper on which they were working.  John has no objections to being executed for Bud’s death, but his later killing of the faithless Shirley he regards as justifiable homicide.

We know from the beginning that Robinson is going to die.  The drama is seeing the steps by which his ordinary life, and ultimately his mind, comes completely unraveled.  The sense of fate closing like a trap could be a metaphor for the Depression, and the feeling that ordinary hard times were deepening into something more existentially threatening and terrifying.  This nightmare offers no salvation, except the sweetness and humanity of Robinson’s thespian art.

Location and Hours of the Gallery

The Poster Gallery is located in Manzanita Hall  adjacent to the Elaine and Alan Armer Screening Room.

Monday through Friday
8 am to 5 pm

For questions, call the Cinema and Television Arts Department Office at
(818) 677-3192 or visit Manzanita Hall Room 195