To support the Department of Communication Studies and important events like this, please visit this link to access our online donation portal. If you have questions about how you can support students or other needs, please contact Jarrod Eamon Fasching, Assistant Director of Development at jarrod.fasching@csun.edu.

COMS Statement of Solidarity with Asians and Asian Americans

Communication Studies faculty and staff stand in solidarity with students, faculty, staff and community members of the Asian and Asian American community. Asian Americans have faced increased violence during the pandemic, and the circulation of racist discourses of the “Kung-flu” and “China virus,” builds on a long history of xenophobic and white supremacist representations of Asians and Asian Americans as carriers of contagion and disease. These and other negative stereotypes have legitimated such attacks in a context where a U.S. President and right-wing media have racialized the pandemic to fuel white supremacist hostilities. NYPD reported that hate crimes against Asian Americans in NYC rose by 1,900% in 2020. Stop AAPI Hate, a reporting database created at the start of the pandemic in response to the rise in racially motivated attacks against Asian Americans, received over 3800 reports of anti-Asian discrimination between 2020-2021. Asian women and the elderly have been particularly targeted for abuse.

We are particularly pained by Tuesday night’s shooting and killing of 8 people, the majority of whom were Asian American women targeted at their workplace. Asian American members of our community see themselves, their mothers, and their aunties in these women. This hate crime is a result of the highly-charged current racial climate, coupled with the longer history of racism and sexism perpetuated against Asian Americans in the US. The shooter stated he wanted to “eliminate” Asian women, who he described as “temptations” and a source of sexual deviance. We recognize in his discourse the persistent fetishization, hyper-sexualization and dehumanization that have been the hallmark of anti-Asian racism in the US. We grieve with families of those who were killed in Atlanta Tuesday night and recognize their humanity. At CSUN and in our surrounding communities, this violence heightens a sense of Asian precarity –exacerbating the isolation of the lockdown, the economic hardships we are experiencing due to the closure of small businesses, and the pain many of us are feeling due to the illness and death of our loved ones.

We condemn the victim blaming currently articulated in the media and upheld by law enforcement, which further traumatizes the Asian community as it repeats historical patterns of militarized, colonial, sexualized, and individual attacks perpetrated against Asian Americans. Atlanta law enforcement reported that the suspect had a “bad day,” eliding underlying anti-Asian sentiment at its core. This is a bald demonstration of what victims of anti-Asian violence have been decrying: the endemic refusal of the police to identify violence against Asians as a hate crime. Given this history, and anti-Black racism tied to police violence, we caution that the answer to anti-Asian violence is not more policing. Rather, we call for community-based responses, further decriminalization of migration, and protection of labor rights for all workers, including those in precarious industries like the women who were targeted.

Times like this make it apparent why it is vital that students see themselves represented in the priorities of the university. An overwhelming majority of CSUN’s student population are students of color. For many faculty and staff of color, our students’ struggles and fears are (or have been) our struggles and fears. That in and of itself provides a sense of belonging and safety, although alone it is not enough without tangible resources that empower faculty and staff to carry this burden. We must prioritize making our department and our campus a locus of solidarity and mutual care. We literally cannot do our jobs without it. We therefore reiterate our call to the University to:

The Communication Studies Department is unequivocally committed to students of color, and Asian and Asian American students in particular at this moment of racist and sexist violence. Our hope as a department is that MCCAMC and the University commit resources to implementing a long-term plan of action that addresses critical social justice issues that affect faculty, students and staff on this campus directly or indirectly.

a social justice performance
exploring the relationships between ritual and rights,
justice and history, here and now.

Please join us and invite your communities!
The show will air on our YouTube page at 7pm on Dec 4th and 5th:

After the Saturday show, we will host a talkback where you can ask questions of the cast and learn more about CSUN Performance Ensemble! Please join us Dec 5th immediately after the show airs at:
https://csun.zoom.us/j/83535217958?pwd=RzNoMXkwaVhhdFZlRlBSbzR5d0U0Zz09

The National Endowment for the Humanities (NEH) today announced $32.8 million in grants to support 213 humanities projects in 44 states, the District of Columbia, and Puerto Rico.  Read more

We spoke to professors and experts from several universities and companies to get their opinions on where the job market for recent graduates is heading, as well as how young graduates entering the industry can be adequately prepared. Here are their thoughts.

To the campus community...

We in Communication Studies stand in solidarity with our Black faculty, students, staff, and loved ones to condemn the unconscionable murder of George Floyd, Ahmaud Arbery, Tony McCade, Breonna Taylor and too many others. Words are inadequate to express the pain and anger we feel at witnessing over and over again the extrajudicial murder of Black people without any accountability.

Students, faculty and staff of color – and at this moment, our Black faculty, students and staff in particular – struggle to understand why their lives and contributions to the world are so undervalued and, in some cases, completely disregarded. Communication Studies is committed to implementing education, mentorship, and other meaningful practices that will value their lives and contributions. Our department, college, and the university must not put additional burdens on them or remove support systems that enable them to cope and thrive.

As educators we know that our faculty, students, and staff of color need support now more than ever. We also fear that during this budget crisis some of the first programs on the chopping block are those that provide a sense of support, belonging, and safety to our most vulnerable populations, including co-curricular programs as well as counseling and other mental health services.

We want more than words.

Moreover, times like this make it apparent why it is so important that students see themselves represented in the faculty and staff. An overwhelming majority of CSUN’s student population are students of color. For many faculty and staff of color, our students’ struggles and fears are (or have been) our struggles and fears. That in and of itself provides a sense of belonging and safety, although alone it is not enough without tangible resources that empower faculty and staff to carry this burden. We must prioritize making our department and our campus a locus of solidarity and mutual care. We literally cannot do our jobs without it.

The Communication Studies Department is unequivocally committed to students of color, and Black students in particular, at this moment. Our hope as a department is that MCCAMC and the University commit resources to implementing a long-term plan of action that addresses critical social justice issues that affect faculty, students and staff on this campus directly or indirectly. Business cannot carry on as usual. Not for us. Not this time.

Read the entire story in GradReports.com. These are the best 25 colleges that offer a Master's Degree in Communications, based on median salary one year after graduation. The school with the highest median salary for this degree is Columbia University in the City of New York, at $97,600. CSUN is nationally listed at #25.

Why Comm and not Comms? If you do not understand why we call ourselves the Department of Communication Studies and not Communications, you will after reading the following paragraphs. The term “communication” reflects our department’s focus and approach to communication—which simply means the process by which humans use symbols, verbal and nonverbal, to create meaning and form relationships with other humans within a variety of contexts, cultures, and mediated environments. This definition of Communication is the essence of what we teach, research, and do in our department through Performance Studies, Rhetorical Studies, and Communication Science.

“Communications,” on the other hand, is often used to refer to the products—the messages that are transmitted or distributed—or to the equipment (like wireless or fiber optic cables) that conducts the transmission. While these are integral elements of communication studies, they do not form the basis for our program at CSUN. You might consider Journalism or Cinema Television if this is your interest. Thus, we prefer “communication” to emphasize more than an applied art of communicating (a verb) but rather the study of communication (a noun). We hope you have a better understanding of why we are not called “Communications.”

NOTE: The paragraphs above were slightly modified from the Department of Communication Studies at Cornell University and it provides an accurate and adequate answer to why we use Communication and NOT Communications.

The Department will be following all University COVID-19 Safety Guidelines and staff will still be available virtually from
8:00am to 5:00pm Monday – Friday.

To request an advisement appointment please email us.

Be sure to include in your email: Name, reason for appt., CSUN ID, CSUN Email, and best phone number to contact you.

Communiqué Newsletter hot off the press 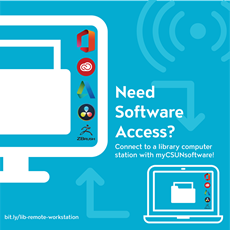 Just wanted to spread the word about another new service that is now available to students:
12 of the library’s high-end HP computer stations originally situated outside the Creative Media Studio have now been made available through myCSUNsoftware to give CSUN students the ability to connect to the computers remotely on their home device. The Multimedia and Science & Engineering workstations are loaded with a full range of applications for digital creation/modeling/editing. Students are now able to access these workstations via myCSUNsoftware and utilize programs such as Adobe CC, Autodesk apps, ZBrush, ToonBoom and more! You can see the full list of software available and instructions on how to connect with this link:
https://library.csun.edu/learning-commons/remote-workstation
CMS student assistants are available to give software support either through the CMS/LTS LibChat widget (attached to various CMS/LTS related web pages) or patrons can make a 15-minute Zoom software help session appointment to get one-on-one software support with a CMS student assistant. You can find more information on this service at https://csun.libcal.com/reserve/cms-software-help