Luis Alfaro is an Emmy award nominee and renowned Chicano playwright, writer, performer, and director whose work has been enjoyed throughout the United States, Canada, England, France and Romania. He writes about the Los Angeles barrios and issues of race, gender, and sexual orientation. Alfaro’s plays and performances include: Oedipus Rey; Breakfast, Lunch & Dinner; Mojada; and Electricidad, to name a few. 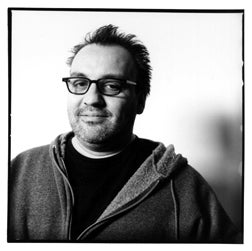 Luis Alfaro is a writer/performer who has been working in theater, performance, poetry and journalism since 1982. A multi-disciplined artist, he is also works as a director, curator, producer and community organizer.

A Chicano born and raised in the Pico-Union district of downtown Los Angeles, Luis is the recipient of a John D. and Catherine T. MacArthur Foundation fellowship, popularly known as a “genius grant”, awarded to people who have demonstrated expertise and exceptional creativity in their respective fields. He is the recipient of a prestigious Joyce Foundation Fellowship for 2013/14 and is the first Writer-in-Residence in the 80-year history of the Oregon Shakespeare Festival for the next three seasons through the generous support of the Mellon Foundation Fellowship.

Luis is the only playwright to receive two Kennedy Center Fund for New American Play awards in the same year. He is a recipient of, among others, University of California Regents Lecturer Appointment, ‘Treasure of Los Angeles’ from the Los Angeles Central City Business Association, the L.A. Weekly ‘Queen of the Angels’ theater award, and the 2006 James A. Doolittle Lifetime Achievement ‘Ovation’ Award.

Luis was a resident artist at the Mark Taper Forum for ten years. He served as Director of New Play Development where he produced and developed over 150 new plays in the Taper Too, New Work Festival and Next Step seasons and managed the laboratory work of the company.

He has taught throughout the country and is currently an Assistant Professor in the MFA Dramatic Writing Program at the University of Southern California (USC). Previously he taught at California Institute of the Arts (Cal-Arts).

His solo performance work has been seen throughout the United States, England and Mexico, including the Institute of Contemporary Art in London, The Getty Center, Boston Center for the Arts, The Goodman Theatre, Hirshorn Museum at the Smithsonian, South Coast Repertory, Oregon Shakespeare Festival and X-Teresa Performance Space in Mexico City.

He was nominated for an Emmy for his short film, Chicanismo, and has an award-winning recording, down town, on New Alliance Records.