Meeting the Moment: Responsive Curriculum Across the College

Meeting the Moment: Responsive Curriculum Across the College
written by Teresa Morrison

California State University, Northridge (CSUN) is a proudly forward-thinking campus with an ever-expanding catalogue of faculty-driven socially conscious academic programming. Whether novel curriculum is responding to social change or new career paths—or both—the primary impetus is ensuring that CSUN students enjoy equitable access to rigorous, challenging academic and artistic ideas that broaden intellectual breadth and advance career potential. Any faculty member who has shepherded a new proposal through the campus approvals process knows it’s a long road from initial concept to classroom reality. It takes passion to maintain enthusiasm for ideas throughout planning, consultation, curriculum development, and committee approval phases, and the university is a richer place for faculty members’ ongoing dedication to innovate.

Over the last several decades small-market news outlets have evaporated amid a journalism landscape realigned by corporate consolidation, resulting in a dearth of relevant local reporting. Professor Daniela Gerson, who studied specialized journalism at the University of Southern California and served as Director of the Civic Engagement and Journalism Initiative at USC’s Annenberg School for Communication and Journalism, sees a way out of the national news echo chamber and it hinges on immersing students in the practice of engaged journalism, hyperlocal coverage of discrete communities by native or embedded reporters.

Gerson’s Engaging Diverse Communities course debuted this fall, though it’s not the first time it’s been offered. The course had been scheduled on previous occasions but was cancelled each time due to low enrollment. This fall was different; it attracted enough enrollment for not just one but two sections. Maybe students were energized by summer Black Lives Matter (BLM) marches for the fair and equitable treatment of all citizens. Maybe they witnessed the disparate effects of the pandemic among communities of color and immigrant neighborhoods. Whatever the reasons, the time is ripe for this course at CSUN, where 70% of journalism majors come from historically underserved racial or ethnic backgrounds and from neighborhoods that seldom make the news in an objective light.

As the cofounder and editor of Migratory Notes, a weekly newsletter focused on accessible news delivery for immigrants and advocacy groups, Gerson has deep experience in reaching communities with specialized needs and interests. And she enlists a diverse array of grassroots journalists as guest speakers on different facets of engaged journalism. Javier Cabral speaks to the essence of street-level journalism as editor of L.A. Taco, which grew from an amateur blog about food and youth culture into a digital platform featuring breaking news, politics, and culture, all with a local point of view. (And yes, you can still go there to map the best tacos in the city!) Jesse Hardman shares tips and tools from Listening Post, a training and resource collective he founded to help cultivate relevant, inclusive reporting among community journalists at all levels. New York Times contributor Walter Thompson-Hernández speaks to finding unique stories in an information-saturated world by focusing on how individuals and communities cultivate a sense of belonging. Just a few of his recent subjects: the women of Oaxacan rap, Houston cowgirls, Compton Cowboys, and Chicana/o influence in Japan. And An Xiao Mina shows students how she’s helping to tame the disinformation virus through crowd-sourced fact-checking at technology nonprofit Meedan, focused on initiatives to strengthen journalism, digital literacy, and information access.

With her guest speakers, Gerson inspires students to critically examine their own communities and experiences. An early semester assignment has them writing about their home communities through a personal lens and posting their essays to Medium, which Gerson employs as an accessible publishing platform for her classes. When her spring class in feature writing tackled community angles of the 2020 U.S. Census, the articles appeared as a group publication there. The current class will publish their final projects there as well, with articles covering Covid-19’s disparate impacts on diverse communities, issues college students face in the pandemic, food vendors struggling to survive the shutdown, deep dives into mask debates among various neighborhoods, and ongoing racial reckoning in the wake of this restless summer. Later this fall, you can follow their stories at this Medium publication. Gerson has also partnered with L.A. Taco and may also air some stories in partnership with KPCC. 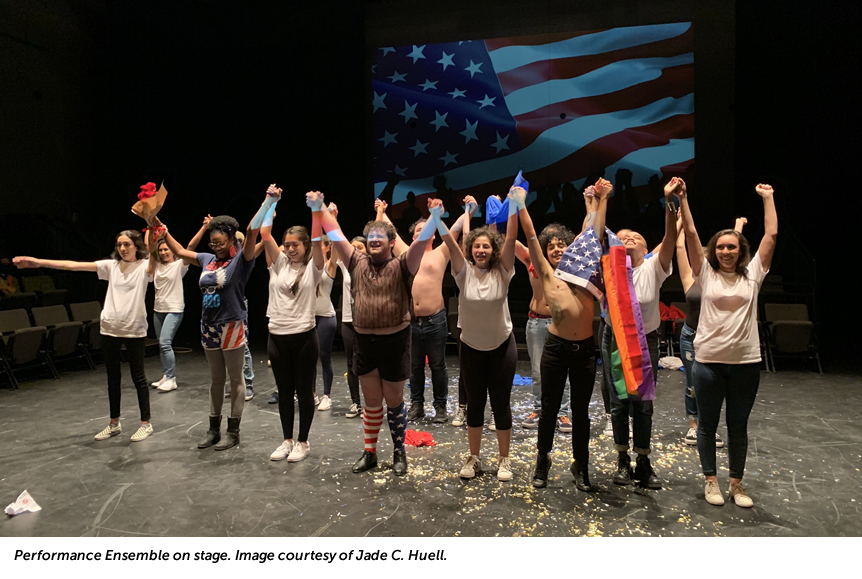 Communication Studies professor Jade C. Huell, who directs the CSUN Performance Ensemble, is also engaging students directly with current events, especially continuing BLM activities. Thinking way back to those first weeks of self-quarantine she remembers musing amid all that stillness about the potential intersections between the mundane and the musical. For instance, what if the ensemble took an inspirational leap from the music of sweeping? But then George Floyd was killed, kicking off waves of protest in an increasingly surreal summer, and Huell quickly realized that “a broom opera wasn’t going to meet this moment!”

Huell asks every Performance Ensemble cohort up front, “What’s wrong with the world, and what do you want to do about it?” She believes strongly in performing arts as a vehicle for social change, and her students share that sense of mission. This semester they’re preparing “Rights of Passage,” which will explore parallels between the Civil Rights and BLM movements. In viewing the marches and protests through a decades-long lens, they hope to illuminate and clarify what social justice means amid such uncertain times.

Huell is also leading the organizing committee for the 2021 edition of the Patti Pace Performance Festival, which will be held virtually for the first time in its 20-year-plus history. Huell finds herself grappling with ways to make this very physical, intimate experience meaningful in the remote space. But new delivery modes can create opportunity, too. It enables greater attendance by a broad swath of society, and the organizing committee is capitalizing on this wider audience to make inroads toward greater diversity in the festival. Huell notes that performance studies has historically been dominated by white faces and voices and the Patti Pace festival has reflected that. This year the organizing committee is highlighting contributions of performers who have been historically marginalized. Titled Meeting the Movement, this year’s festival explicitly asks participants to consider: “What are the possibilities and limitations of performance as resistance? How has this moment altered, enhanced, and/or challenged our understanding(s) of performance pedagogy, as well as the performance of identity, culture, history, empathy, and/or storytelling? How is the field of performance studies complicit in perpetuating white supremacy? How, as a field, are we meeting the movement?”

In Huell’s experience, the students have always stepped up to do the work, physically and emotionally, and they’re meeting the challenges of 2020 with equal passion. “Rights of Passage” will debut December 4 on YouTube. Follow this page for details. 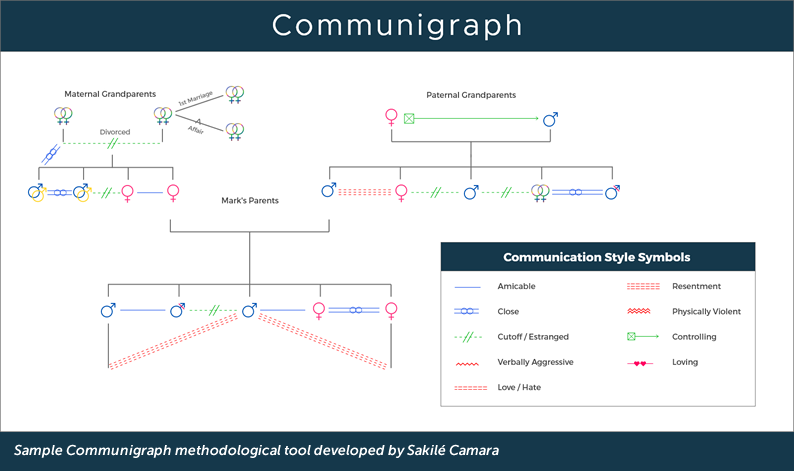 “Developing this course was important for personal and academic reasons,” Camara says. “I won’t go into details about my personal life, but if you looked at my family of origin it would be considered all things devalued.” She notes that her own definition of family is intentionally abstract because families are ever present and ever changing. “I define family as a complex system involving two or more people interacting with each other who may or may not be of biological kin,” she says, adding that she purposefully omits references to race, ethnicity, sexuality, or gender. “Eliminating these markers provides space for inclusion.”

Family Communication examines how families manage power, intimacy, boundaries, and the interactive process of meaning making. It’s a deep dive into how families endure across generations, examining their complex social structures, how interactions differ inside and outside kin groups, and what kinds of images, stories, rituals, rules, and roles give our structures meaning.

To help manage information that feels abstract and subjective, Camara has developed the Communigraph tool. Adapted from a pictorial graphic called the Genogram that’s used in psychology to visualize hereditary patterns, Camara’s Communigraph similarly graphs family trees to track power, satisfaction, and intimacy patterns across generations. Students will use it in participant observation as a methodological tool to highlight genealogy and collective family experience as factors that may contribute to current family dynamics.

Camara’s long-term goal is to equip students with deep knowledge of family dynamics, particularly families underserved or distorted by social structures, so that as professionals they’ll have the information they need to impact government policies and effect meaningful change. “We complicate family life by placing value on certain family structures and dismissing others as if they are outside of some sanctified realm,” Camara says. “This is reinforced by government policies and practices. We get in the way by placing restrictions on what is of value.”

Family Communication is expected to debut on the Fall 2021 schedule. 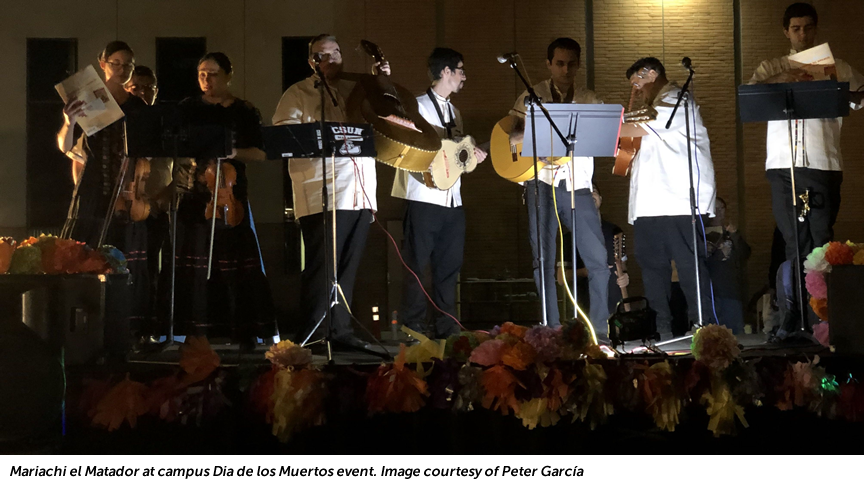 While most courses rely entirely on faculty proposals, the Music department’s upcoming Mariachi Ensemble course stands on the shoulders of dedicated student musicians who played for over a decade out of sheer love for Mexican regional and Spanish-speaking diasporic music. They got a huge assist from Chicana/o Studies professor Peter García, who served for years as a volunteer faculty adviser, musical codirector, and occasional guest musician to CSUN’s Latino Music Ensemble Club. García watched too many passionate musicians withdraw from the club because they were overextended and couldn’t afford to commit so much rehearsal time to an ensemble that yielded no degree units, so he kept leaning in to the idea of establishing it as a credit-bearing course. With support from music professor Ric Alviso, it’s finally happening.

Mariachi el Matador started life way back in 2010 when music theory/composition majors Abraham Hernandez and Efrain Arrellano determined that student composers needed an ensemble where they could workshop their arrangements of Mexican popular and folk music. It wasn’t long before the ensemble was accepting invitations to play on and off-campus events and private parties, and in 2012 they established themselves as the Latino Music Ensemble Club. It’s been going strong ever since, and despite his own tireless work on the club’s behalf, García unabashedly credits the enthusiasm and energy of the student musicians for its success. He fretted over the ensemble’s sustainability each time key members graduated and moved on, but he was continually impressed when others stepped up to recruit, audition, and organize rehearsals with a fresh cohort of eager musicians.

The group went through several iterations, with musical repertoire influenced by various student leaders over the years. Now known as Mariachi el Matador under the leadership of student director Carlos Carrasco, the club exclusively plays traditional mariachi music in its many regional variations and styles. Carrasco primarily plays guitar and vihuela, with other members playing traditional mariachi instruments like violin, trumpet, guitarrón, and, depending on repertoire, harp and accordion. Many students enter the ensemble with prior experience as professional mariachi musicians in family and local ensembles. But really, Mariachi el Matador is open to any musician with passion for the musical traditions, even if they play less traditional instruments. Some classically trained student musicians have delighted in embracing mariachi’s challenges: its unique fingerings, its emotive extroversion, its challenging rhythms and tight harmonies.

“The more instruments, the better the song,” Carrasco says.

As a course, Mariachi Ensemble will concentrate largely on rehearsal and mastery of regional variations and styles of traditional mariachi music developed in post-Revolutionary urban Mexico and along the U.S./Mexico borderlands. In addition to work on musicianship and harmonies, classes will address guided listening, cultural studies, mariachi etiquette, and language fluency. The course is expected to debut in fall 2021.

For the Department of Music, the Mariachi Ensemble course is a logical embrace of a musical tradition originating in the 18th century and designated by UNESCO in 2011 as an Intangible Cultural Heritage. For the students, it’s recognition of time and passion invested in perfecting a style of music as worthy of their pursuit as any other credit-bearing ensemble. For Mariachi el Matador, the course yields continued sustainability, encouraging new generations of musicians to learn mariachi’s rich traditions and continue innovating its future.