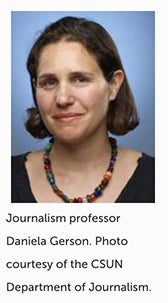 California State University, Northridge journalism professor Daniela Gerson has been named the West Coast executive director for the Center for Community and Ethnic Media (CCEM) at City University of New York Graduate School of Journalism. She assumed her new role in June of this year.

CCEM at the City University of New York builds a bridge between minority and ethnic media, mainstream media outlets and the public at large through collaboration with more than 300 community outlets in New York. These outlets serve readers, listeners and viewers across the nation.

As West Coast director for CCEM, Gerson will help broaden the organization’s reach, with a focus on elevating the stature of newsrooms, helping journalists with professional development and aiming to strengthen civic engagement.

Gerson has taught at CSUN since 2016. Prior to becoming a professor, she was the engagement editor at the Los Angeles Times. Gerson speaks five languages and has extensive experience reporting on immigrant communities. In 2017, she helped launch a newsletter called ​Migratory Notes. ​