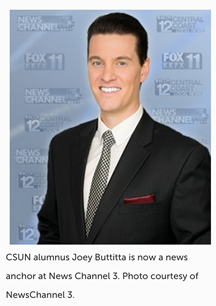 When his girlfriend, Kelsey Gerckens, proposed that they apply to CBS’ globetrotting reality show The Amazing Race, Joey Buttitta ’11 (Journalism) didn’t expect to be selected, he said. One phone call and a few months later, the couple had to juggle time away from their jobs as news reporters on KEYT “NewsChannel 3″ in Santa Barbara during the production of the show — which takes more than a month to film.

Buttitta, a California State University, Northridge alumnus, was about to join his girlfriend in a heated contest with 11 other teams in a race around the world during the 27th season of The Amazing Race.

Production lasted for five weeks, an incredibly long absence for two reporters at the same station. But management at the ABC affiliate, KEYT, supported the two with surprising flexibility and encouragement — even for a show at a rival network.

“Who gets five weeks off? Nobody,” Buttitta said. “But we were very lucky.”

The couple talked to the news director, who turned out to be a huge Amazing Race fan. He reached out to the general manager, and the station made the necessary accommodations.

“We were so happy to be able to do this,” Buttitta said.

The entire staff of the station was thrilled and supported the couple along the way, he said. “I really appreciate them and everybody we work with,” Buttitta said.

The CSUN alum, who never had traveled outside the U.S. before filming the show, said he found the pre-travel arrangements to be the biggest challenge — but the journey itself was eye-opening.

“For this to be my first time getting a taste of traveling, there couldn’t have been a better way to do it,” he said. “It was cool to experience different cultures.”

The reality game show Amazing Race challenges 11 teams of two people, to solve various tasks in a scavenger hunt around the world. Each episode, the weakest team gets eliminated, until one final team remains, winning the grant prize of $1 million.

There is nothing that can prepare one for a reality-show race around the world, but Buttitta said he felt well prepared for his career in broadcast journalism after studying at CSUN. He also credited his additional work as an intern at KABC Los Angeles, for honing his skills before graduation. 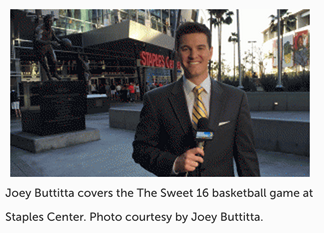 “Combining working at KABC with going to school at CSUN [made me] feel like I was prepared for the real world,” Buttitta said. “When I graduated from CSUN, I already knew exactly what I wanted to do.”

Both of Buttitta’s parents attended CSUN, as well as his brother and sister. “We’re a Cal State Northridge family,” Buttitta said.

The family maintained strong ties to the Matador community over the years: Buttitta’s father, Joe ’64 (Journalism) served as a sports information director at CSUN and later as a sports anchor at KTLA and columnist for the Daily News. His mother, Teri ’76 (Kinesiology) taught in the CSUN Department of Kinesiology for 10 years.

Of his own years on campus, Buttitta said, “I learned a lot, met a lot of great people within the journalism department and spent many hours inside Manzanita Hall. I really enjoyed CSUN. It was always a good place.”

Buttitta had a head start in journalism, growing up around reporting and news, at his father’s side. As a child, Buttitta said, he wanted to be on television, whether it was in sports or news.

“While at CSUN, I was able to put my hands into a lot of different deals in journalism,” he said. “The diversity that CSUN gave me helped me find what I enjoyed. It was a huge help.”

He also reminisced about a favorite spot on campus — the Oviatt Library, which provided a great place to recharge and nap between classes, he said. 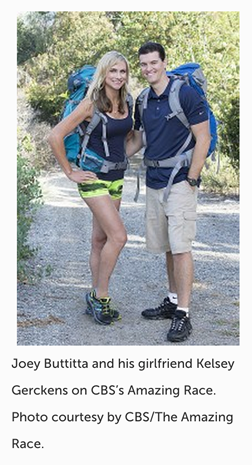 Buttitta’s longtime girlfriend and co-worker, Gerckens, is his team partner in their race around the globe.

“She’s a huge adventurer, and she loves to do all the fun stuff,” Buttitta said.

Traveling the world and staying together 24/7 for five weeks was a significant step in their relationship.

“Kelsey and I really got along the entire time,” Buttitta said. “Coming out of [the show], we’re still very much in love with each other, and knowing we’re that close was definitely the best part of everything.”