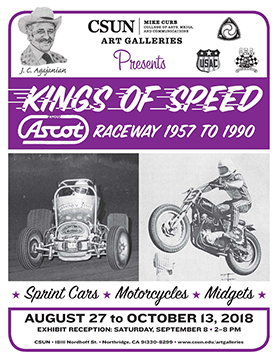 The exhibition showcases a selection of vehicles, including sprint cars, midgets and motorcycles, all integral to the legacy of Ascot Park in Gardena, Calif. Historic objects including posters, helmets, leathers, trophies and other memorabilia generously loaned by the Agajanian family will be on display.

The exhibition will open Aug. 27 and will run through Oct. 13, 2018. A reception is scheduled to take place from 2 to 8 p.m. on Saturday, Sept. 8. The university’s Art Galleries are located on North University Drive (Plummer Street), at 18111 Nordhoff St. in Northridge.

“We have some very rare and very collectible sprint cars and midgets,” said John Parker, the exhibition’s curator, “as well as a lot of flat-track motorcycles and speedway bikes that all competed at Ascot.”

Several of the bikes celebrated on display won nationals at Ascot, Parker said. The “Tamale Wagon” — a celebrated sprint car on display at the exhibition — is the 1978 championship car that won the California Racing Association title.

“The man behind that car is named Alex Morales,” Parker said. “At the end of World War II, Alex – with a wooden pushcart in downtown Los Angeles, where the first Sears and Roebucks building was — used to push this cart and sell his mother’s handmade tamales. From very humble beginnings, he grew that into a million-dollar Mexican food company. Every year as a car owner, he would build these brand new, beautiful cars with fast motors, great paint jobs and lots of chrome. He always called his race cars the ‘Tamale Wagon.’

“In open-wheel racing, when cars like the ‘Tamale Wagon’ touch wheels, they start flipping and crashing,” said Parker. “So, it’s very rare to find a car that campaigned all through the year of 1978 in such great condition.

“I’m eternally grateful for Dick Woodland loaning us this car from his private collection,” he added. “I don’t think that car has been seen in public in the last 10 years.”

For 33 years, Ascot was the busiest racing venue in the world, hosting an endless array of weekly races. Ascot Park Raceway ranked behind only the Indianapolis Motor Speedway and Daytona International Speedway as the best-known racing facility in the country.

Gallery hours are noon to 4 p.m. Monday through Saturday, and noon to 8 p.m. on Thursday. More information and press images are available upon request; call the Art Galleries at (818) 677-2156 or visit www.csun.edu/artgalleries.