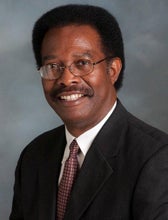 Dr. Watkins was appointed Vice President for Student Affairs and Dean of Students at California State University, Northridge in June 2010. He provides leadership to the Klotz Student Health Center, University Counseling Services, Student Outreach and Recruitment Services, Disabilities Resources and Educational Services, Financial Aid and Scholarships, the National Center on Deafness, the Career Center, and Student Housing and Conference Services. He also provides administrative oversight to the University Student Union and the Associated Student, Inc. In his role as Dean of Students, he serves as an advocate for students, supports student well-being, promotes student ethical development, and is responsible for enforcing the Student Conduct Code.

Vice President Watkins is an alumnus of Cal State Northridge, earning his bachelor’s degree in Urban Studies in 1974. As an undergraduate, he was elected Student Body President, the first African American to hold that position, and received the prestigious Outstanding Graduating Senior Award. He was awarded a scholarship to attend the University of Southern California where he earned a master’s in Public Administration. He received his doctorate in Education Leadership from the University of California, Los Angeles.

While an undergraduate, Dr. Watkins began working at Cal State Northridge as a work study student. Upon graduation his first full-time staff appointment was as a personnel assistant in Human Resources. Over time he steadily assumed positions of increasing responsibility in that department, eventually rising to the position of Associate Director for Personnel and Employee Relations. In line with his interest in and commitment to student success, he joined the senior leadership team of the Division of Student Affairs in 1993, and was appointed Assistant Vice President for Student Life in 1994. He was promoted to Associate Vice President in 2004, and named Acting Vice President for Student Affairs in December 2009.

Dr. Watkins has served on or chaired a wide range of campus committees and boards in areas such as athletics, enrollment management, advisement, first-year students, new student orientation, commencements, campus physical planning, and student conduct issues. He has advised numerous student leaders, clubs and organizations, for which he has received several honors. He is widely known and respected for his commitment to the intellectual and personal development of students, and is dedicated to continuing the work that has been achieved to make Student Affairs a division that is focused on student learning and success.