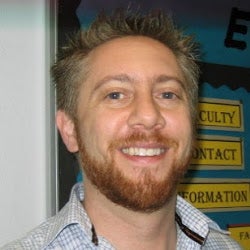 Scott Kleinman
English professor Scott Kleinman and his colleague Dorothy Kim from Vassar College have received a $200,000 Scholarly Editions and Translations grant from the National Endowment for the Humanities. NEH announced the award on July 24. Kleinman and Kim will serve as co-principal investigators on the project An Archive of Early Middle English, with NEH funding to be awarded over a three-year period.

The Archive of Early Middle English is an ongoing project for Kleinman, Kim, and their collaborators. The electronic resource will make available to scholars worldwide the texts of original Early Middle English manuscripts (c. 1100–1350), beginning with three volumes whose restricted status at Oxford University’s Bodleian Library makes them currently inaccessible to the vast majority of researchers. Among the earliest extant completely English manuscripts, the volumes they have selected for publication are important both as literature and as a key to understanding the evolution of English and its development into a primary literary language in the Middle Ages.

CSUN’s Center for the Digital Humanities, housed by the College of Humanities and directed by Kleinman, will serve as the final project site. The Center is a locus of activity for professors and students from wide-ranging fields who are interested in digital humanities applications, including—but certainly not limited to—the preservation and presentation of cultural artifacts in electronic form, use of digital technologies to approach traditional questions in the study of humanities, creation of large-scale digital archives and databases to analyze humanities subjects, and analysis of computing technologies’ effects on humanities study.

Despite its status as a non-state-funded initiative, the Center is among the most active on campus and has established CSUN among the wider digital humanities community. In May the Center hosted the first DH SoCal Research Slam, with the assistance of academic programming funds awarded by the College of Humanities. The event was such a success that CSUN has been asked to host next year’s gathering as well.

The College of Humanities congratulates Professor Kleinman on his NEH grant and on the continuing success of his initiatives!