The specter of colonialism and imperialism has once again raised its ugly head, this time inside our own communities of color. The racist remarks caught on tape made by Latinx members of the L.A. City Council, Nury Martinez, the now former president, Kevin De Leon, and Gil Cedillo, and the President of the Los Angeles County Federation of Labor, Ron Herrera have laid out in the open the deep contempt towards African Americans, indigenous peoples, immigrants, the LGBTQ community, and the Jewish community that is still deeply ingrained in our communities and leadership. As educators for gender and racial justice, the Department of Gender & Women’s Studies condemns emphatically this indecent behavior of our political leaders and demand their immediate resignation. We can do better; we must do better. We say we must always be impeccable with our words whether in private or in public.

In memory of our Dianne:

The Department of Gender and Women’s Studies grieves the loss of our beloved colleague, Dianne Bartlow. Dianne came to CSUN in 2002. She was an engaged researcher, a great teacher, and a multiple Emmy Award winner as a director, writer, and producer of film. She will be missed dearly by her students, colleagues, and the larger community at CSUN. The world has lost a champion of women’s rights and the black struggle for dignity and justice. Rest in peace, Dianne.

The Department of Gender & Women’s Studies at CSUN emphasizes interdisciplinary, cross-cultural and transnational studies with a focus on gender.

It includes course work in feminist theories, women and social movements, transnational feminisms, women of color feminisms, decolonial and postcolonial feminisms, women’s economic conditions in the context of globalization and development, productions of women in the media and literature, queer studies, women’s health and masculinity studies.

The major and minor provide a background for various careers such as law, counseling and healthcare or advanced graduate degrees in fields such as Gender Studies, Women’s Studies, education, communication, political, cultural and media studies.

Now you can Double Major in Gender & Women's Studies!

Double majoring in Gender & Women’s Studies is one of the best career choices you have today at CSUN.  Make yourself distinctive from others in your primary major by adding GWS as a double major. It is easy to do. Select out of a variety of combinations of majors that pique your interests and become an expert in gender and another area of study. Talk to our academic advisors about designing a plan that fits your needs. 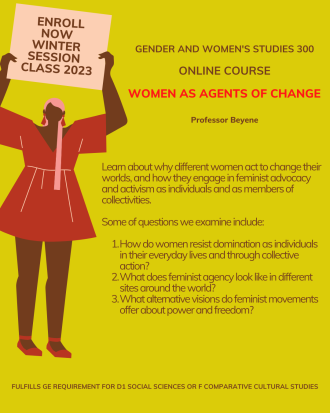 GWS 305 Community Service will be offered in the Spring 2023! Enroll now! 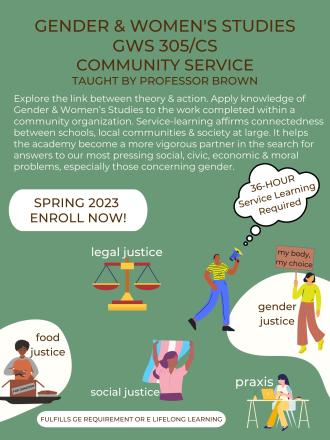