As one of the largest Chicana/o Studies Departments in the nation it is our responsibility to respond forcefully when elected officials and others engage in hate speech against members of the African American and Indigenous communities, as well as of other marginalized communities. It is especially urgent that we raise our voices when the perpetrators are Chicanx/Latinx and are in positions of power and privilege to act on their hate speech.  As educators we are also deeply troubled by the racism and violent speech directed at the young adopted African American child of Councilman Bonin.

The history of racism, colorism, sexism, and homophobia within Chicanx/Latinx communities is directly tied to the colonization of the Americas. These colonized ideas and views are deeply ingrained within many of our families and communities and must be proactively addressed. We have a responsibility to reflect upon and to critically analyze the socio-political systems which are the source of these views and ideas. We must work with humility, compassion, and mindfulness to change our behaviors and speech, and to be true allies to BIPOC, immigrant, and LGBTQ+ communities. We also insist that our elected officials and community leaders be held accountable for their actions.

We share many of the same social and environmental justice struggles with Black, Zapotec, Mayan, Native American, Indigenous, Chicanx/Latinx, Central American, Asian American, Middle Eastern, and LGBTQ+ communities. Our very futures are intertwined with one another and the need for authentic solidarity among each other is urgent. We call for unity, solidarity, and the continued struggle for social justice in Los Angeles and beyond. 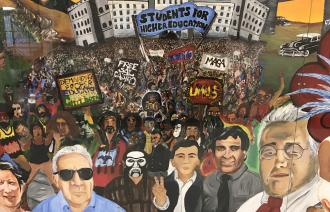