Submit a maintenance request to the Work Control Center:

For after hours facility emergencies, contact the CSUN Police Communications Center at (818) 677-2111.

With approximately five acres and more than 400 Valencia orange trees, the CSUN Orange Grove is a unique feature of the university’s campus landscape and urban forest. The Orange Grove has many facets in terms of its use, and existence, within the campus’ context. For example, the Orange Grove is actively used for research (studying bee populations and pond turtles), stellar and solar observatories are located in the grove, oranges are harvested and provided to local community groups who serve the needy, the area provides a scenic and tranquil place to visit, socialize and study, and to many the Orange Grove provides an remembrance of the agricultural past of Southern California.

In 1973 the University Club, later renamed The Orange Grove Bistro, was built to the west of Monterey Hall and the Orange Grove boundaries were established (see below). From 1975 to 2006 the grove saw very little activity. 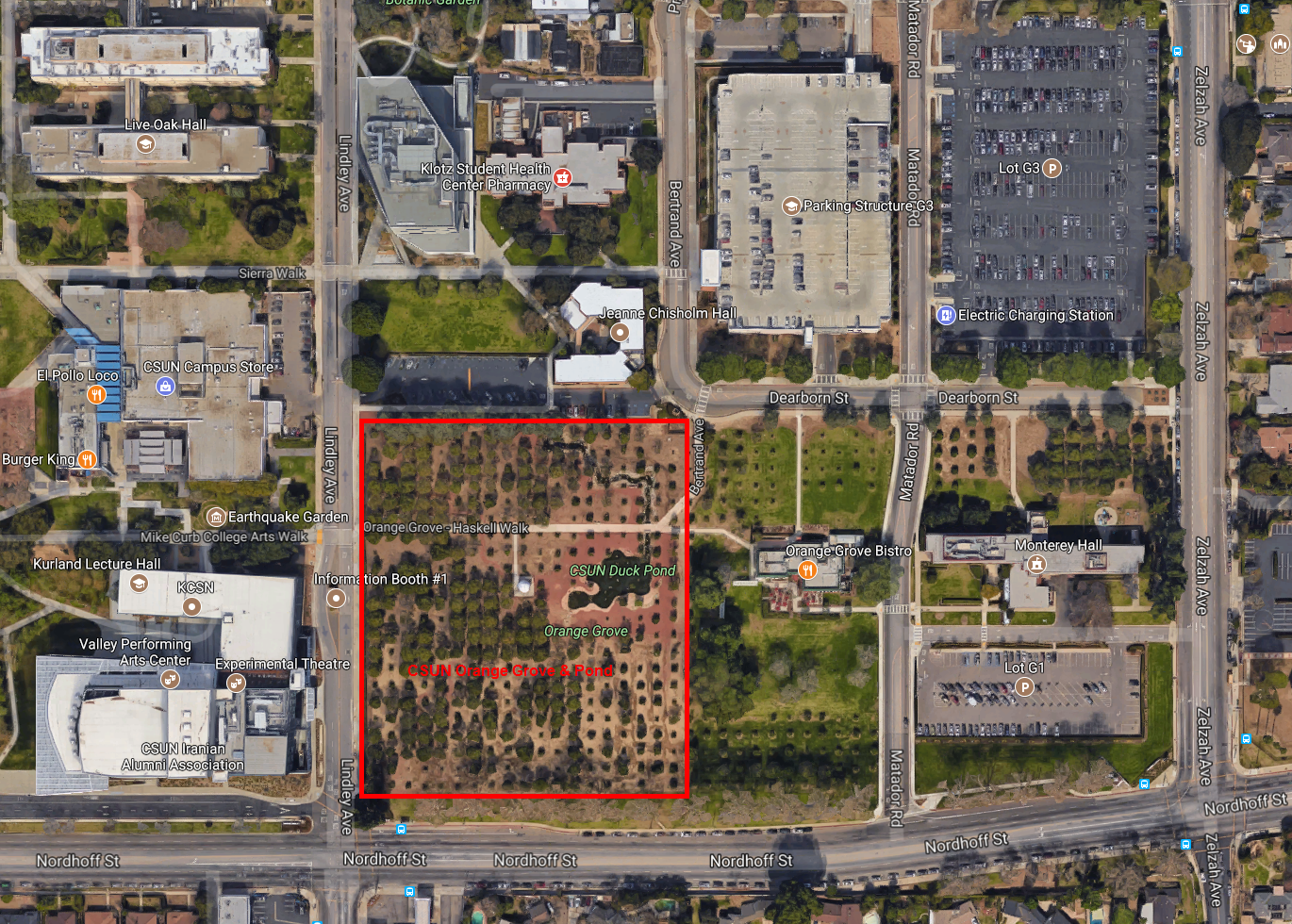 Then in 2008, the university made significant improvements to the Orange Grove, providing easier and greater access, which in turn spurred more visitors, greater awareness and even further improvements.

New decomposed granite walkways and lighting were also added throughout the Orange Grove, which allowed visitors a means to walk in and among the orange trees. Then in 2011 Haskell Walk was constructed, which linked Orange Grove Walk on the west (Later re-named Mike Curb Walk) to the Orange Grove Bistro and the G3 Parking Structure on the east. Additionally, new sidewalk lighting was installed to improve safety and aesthetics in the evenings.

In 2014, another observatory was added to the Orange Grove, the Solar Observatory, as well as a DC Solar Charging Station and picnic tables at the pond.

Most recently in 2016, CSUN’s Physical Plant Management renovated the pond’s pump and filtration systems to improve the overall ecosystem of the pond, which also included two new rock water falls and bio-filtration system.

Using the Campus as a Living Lab

The Orange Grove has many other institutional uses beyond a great place to visit, for example, the Biology Department tracks the turtle population, growth and birth rates.  There is an active research project on honey bee hives, and the Marilyn Magaram Center on campus makes Matador Marmalade from the Oranges, just to name a few.

CSUN’s Institute for Sustainability has partnered with Food Forward for the past seven years to host orange picks and ensure that the fruit in CSUN's Orange Grove is utilized. In 2015, almost 17,000 lbs. of oranges were harvested and in April 2016, more than 400 volunteers spent four hours harvesting 12,785 lbs. of oranges. Oranges were sent to organizations such as Meet Every Need with Dignity (MEND), SOVA/Jewish Family Services of Los Angeles, Family Rescue Center and Seeds of Hope.

How does CSUN Maintain the Orange Grove?

Originally located just west of the Student Health Center, the CSUN Pond was relocated by Physical Plant Management (PPM) to the Orange Grove just before the start of construction of Chaparral Hall in 2007-08. Using the Orange Grove as a back drop, the new pond was carefully constructed to not damage any orange trees and included an extended waterfall, meandering stream bed, bridge, and an enlarged pond (about twice the size as the original location).

The new pond was an instant hit with the campus community and visitors.  The pond is often cited as having the biggest impact on Orange Grove visitors.

The Pond was originally designed as a location to enjoy quiet tranquility and for birds to pass through on annual migrations. It housed a modest population of Koi fish, Mosquito fish (to control pests), a dozen or so California native turtles, and flowering lilies and other aquatic plants. Unfortunately, Red Eared Slider turtles purchased illegally in California were left at the pond by irresponsible pet owners. This invasive species quickly outperformed native species and decimated the vegetation.
Since then, CSUN has invested in the upgrade of pumping and filtration systems, increased water aeration, modified plant selections, and hired a full-time Grounds Worker who oversees the daily care of the Pond and surrounding landscape in collaboration with fellow grounds and skilled trades staff.

In 2016, the pond and its infrastructure were completely renovated and upgraded. The pond was drained and the bottom cleaned, new circulation systems and mechanical and biological filtration systems were installed, new waterfalls and new shallow pools were constructed, new vegetation was planted and the Koi fish were restocked.

In addition to being a pleasant place to visit on campus, the CSUN Pond is a highly managed ecosystem. Students and faculty in CSUN’s Department of Biology have adopted the pond as a living laboratory. Several times each year, students receive hands-on training and experience at the pond, including assessing water quality, marking pond animals, monitoring animal population sizes and sex ratios and assessing reproductive trends. This information is included in analyses that assess animal population trends with a focus on sustainability.

Animals that inhabit the pond:

Who takes care of the animals?

PPM staff checks the Pond daily to identify sick or injured animals in collaboration with the CSUN Biology Department.  The Biology Department conducts regular population checks and tags/tracks turtles as part of an academic program.  Turtles are tagged and tracked for size and growth.  It is estimated that the Pond now houses over 300 invasive Red Eared Slider turtles – far above the population it was designed to hold.  The regular population checks have also identified new full-grown turtles are being left at the pond regularly.

Several volunteers frequent the pond to check on sick animals and communicate with PPM regarding concerns.

Can I drop my pet turtle or duck off at the Pond?

CSUN asks that people do NOT bring their unwanted pets to the Pond.  The current population stresses the environment and additional crowding only endangers the health and wellness of existing wildlife.

Can I feed the animals?

It is best if animals forage for natural food sources than to provide foods that are not natural in the environment. Bread and other processed foods pollute the water and make animals sick – causing digestive problems and disease. Too much food encourages animals to breed and hinders natural duck migration patterns. Artificial food supplies also increase biological waste in the water which intensifies algae blooms.
While it is best to simply enjoy the animals through observation and allow them to care for themselves, if you feel you must feed them, please only bring zoo-grade pellets, cut seedless grapes, birdseed, peas, or corn.

There is a turtle in the street far away from the Pond.

Turtles wandering away from the Pond are typically looking for a place to nest and lay eggs. Usually, that occurs in the adjacent orange grove, however, sometimes they wander onto sidewalks and streets – even as far as Nordhoff. Unfortunately, the breeding patterns and behaviors of wildlife at CSUN are not something we can control.
That said CSUN PPM has placed natural obstacles to attempt to direct turtles away from the streets. Fences have proven to be ineffective as turtles are known to dig under and around enclosures. Additionally, fences are challenging as they can be unsightly and inhibit pedestrian foot traffic.
PPM also has a dedicated Grounds Worker who looks after the Pond and attempts to monitor wildlife in the area, however, sometimes wildlife movement occurs after the employee has left for the day.
Turtle crossing warning signs are a consideration but are challenging due to size and placement issues to be effective. Additionally, placing signs on Nordhoff or Zelzah is outside the CSUN jurisdiction as these are streets governed and regulated by the City of Los Angeles.

The water is green and soupy. Is that dangerous?

The green water is caused by algae blooms when temperatures rise. While they can be unsightly, algae blooms are common in ponds and are not indicative of unhealthy conditions for fish, turtles, or ducks. Pond goers occasionally falsely equate algal blooms with bacteria and a general lack of cleanliness because they can be unsightly. Algal blooms are caused by high levels of nitrogen and phosphorus that come from animal waste and overfeeding. PPM has added various types of aquatic vegetation and biofiltration methods that help remove those nutrients. PPM also conducts more frequent water exchanges and bottom vacuuming during the summer when algae blooms are more common. While both endeavors assist, they cannot completely alleviate algae blooms.
Bacterial levels in the pond are measured by CSUN Biology Department microbiologists and are safe for the animals as they measure at levels consistent with similar naturally occurring freshwater bodies.