Hundreds Rally Against Violence at Walk a Mile In Their Shoes 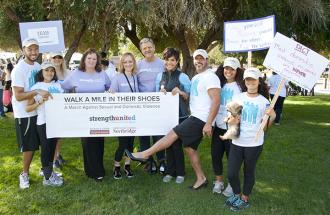 On Saturday, October 24, 2104, about 400 community members and students rallied against domestic and sexual violence at Strength United's Walk a Mile in Their Shoes!

At the event, about 400 people marched a mile through the streets of Northridge to raise awareness about abuse, while also raising funds to support Strength United’s services for victims and prevention programs. Many men at the march walked in high heels, expressing solidarity with female victims of violence.

One in three women and one in six men are victims of rape or sexual assault, according to national statistics.

As Strength United executive administrator Charles Hanson said, “These statistics are simply unacceptable, and that is why we’re marching.”

At a rally before the march, Carmen Serano, an actress known for her role as Principal Carmen on “Breaking Bad” spoke about her own history of abuse for the first time. Serano, also a survivor of childhood abuse, was assaulted again as an adult in 2010.

“I was shattered and embarrassed and ashamed and fearful. I had panic attacks, nightmares and I couldn’t be around people. I ran away and left everything, including my marriage,” she told the crowd at Walk a Mile. 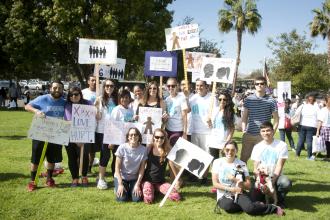 After her assault, Serano moved to the San Fernando Valley and eventually sought help from Strength United, where she received counseling and other services to aid her recovery.

“I will be forever grateful because I now stand before you a whole healed complete survivor,” she said. At the event, Serano’s children and ex-husband, now her “boyfriend,” joined her in the march.

At the march, participants also enjoyed a community resource and activity fair with representatives from over 20 local nonprofits and businesses.

For more photos from Walk a Mile in Their Shoes, see our photo gallery and the Strength United Facebook page.