History of EOP at CSUN

EOP emerged from the Civil Rights movement of the late 1960s as a response to the call for access and equity to higher education. As a result of this hard fought, student-led campaign, there is now an EOP at all 23 California State University campuses. EOP remains a critical component of the California State University system because of its commitment to providing access and innovative support services to thousands of underrepresented students.

Before the formation of EOP, there were a mere handful of African American and Mexican American students in San Fernando Valley State College, now known as CSUN.

NOVEMBER: Several cases of racism occur on campus. BSU along with SDS occupy the administration building until demands are addressed by University President, Dr. Paul Blomgren. Amongst the demands is the expansion of EOP.

*Click here to view the BSU and UMAS demands*

Hundreds of students march to the administration building to see Delmar Oviatt (then standing president) but are met at the doors by riot police. Fighting erupts. 286 students and faculty are arrested for “unlawful” assembly.

Read more about the events that happened on November 4th https://library.csun.edu/SCA/Peek-in-the-Stacks/november-4th-incident 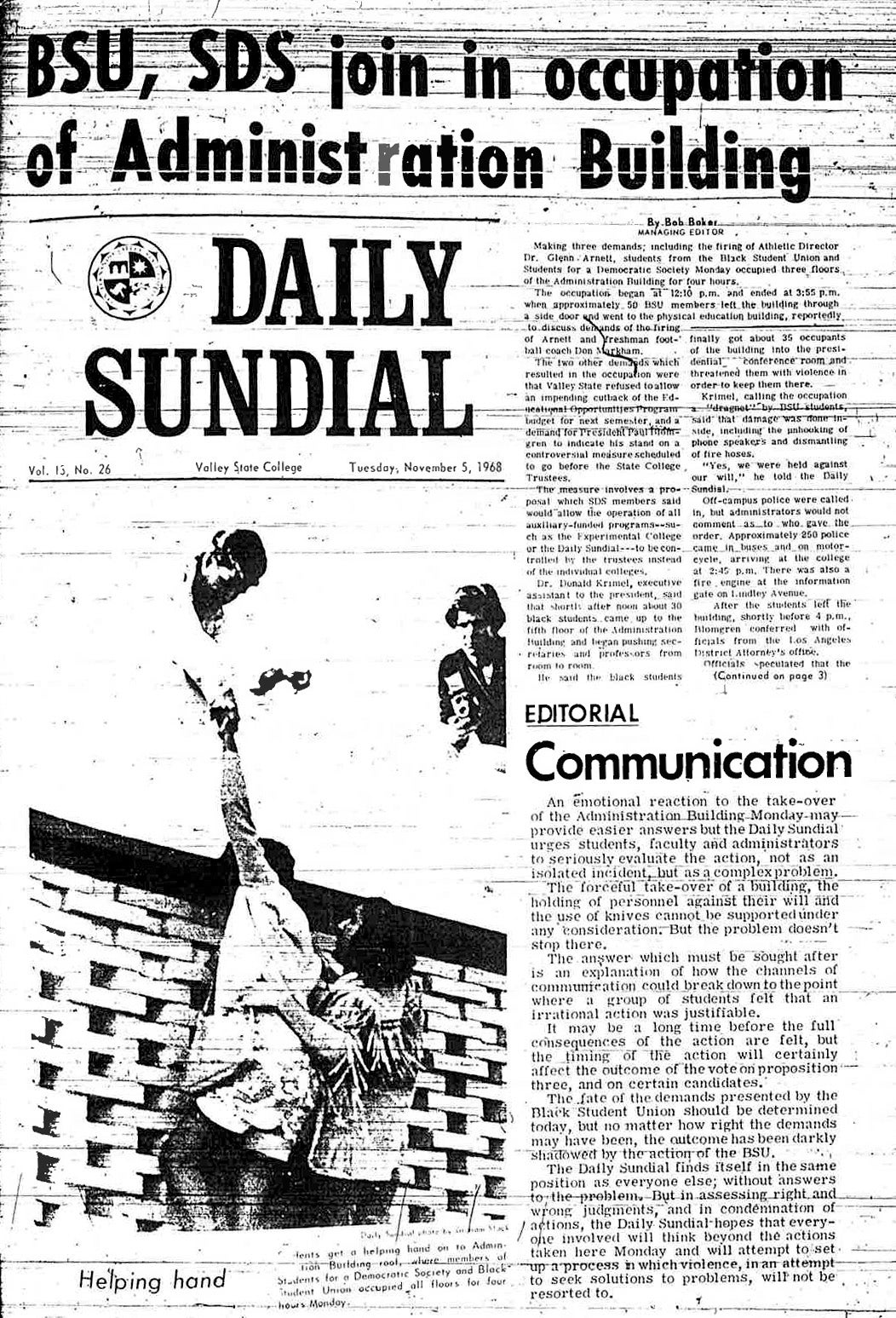 JANUARY: Activism by students, faculty & community members lead to negotiations with the administration and funding for EOP is secured. EOP generates more access for African & Mexican American students making it necessary to create a curriculum relevant to the student’s experience, in effect the African & Chicano/a Studies Departments are established.

Learn more about the courageous students, faculty, and staff who made great sacrifices to fight for justice and inclusion at California State University, Northridge (CSUN): 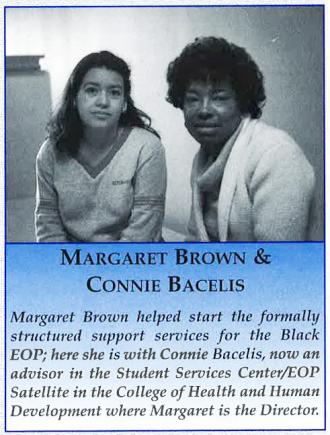 Thanks to the contributions made by Margaret Brown, the concept of peer advisement/peer mentoring was formally inducted as an EOP support service.

The 2 existing EOPs merged. At the time there were 2 EOP; one for Chicano students and one for Black students. In 1975, Keith Bass became the director of the program.

A school-based organizational design begins under the leadership of Dr. Jacqueline Jacobs, then Associate Vice President of Educational Equity and Enrollment Management. This was the beginnings of the College based EOP Satellite services across the university.

In the Fall, driven by budget deficits and a system-wide goal of consolidating functions at the university, EOP was completely decentralized and the position of EOP Director discontinued.

In the Spring, the Chicana/o Studies and Pan African Studies departments objected strenuously to the dismantling of EOP. Students, staff and faculty marched on the Administration Trailer to demand the reinstitution of an OEP Directory and a centralized program.

Leaders of EOP and the Faculty Mentor Program initiate the annual Don Dorsey Excellence in Mentoring Awards for faculty and staff on campus.

While attempting to balance the state’s budget, the then governor, Arnold Schwarzenegger, targets EOP and other outreach programs for elimination. Hundreds of EOP staff, alumni and students statewide travel to Sacramento to protest the budget cuts.

EOP put in place a “time capsule” at the Ralph Prator Sundial Fountain. It will be opened in 2029, to commemorate the 60th Anniversary of the Educational Opportunity Programs at California State University, Northridge.

In addition, EOP added a 5-week Transfer Bridge Program to the transitional experience. This program is designed for students transferring to CSUN from a community college.

Prior to the CSUN EOP DREAM Center, EOP assembled the AB 540 Initiative. A committee of CSUN and EOP staff available to providing services and resources to students with an AB 540 status. The initiative is now called the EOP DREAM initiative.

The EOP Commemorative Plaque is set near Bayramian Hall in honor of the courageous students, faculty and staff who fought for social justice and equality on campus. It was made possible by late EOP Director, José Luis Vargas, Professor Glenn Omatsu and the support of the CSUN administration. Browse through a full image collection here. 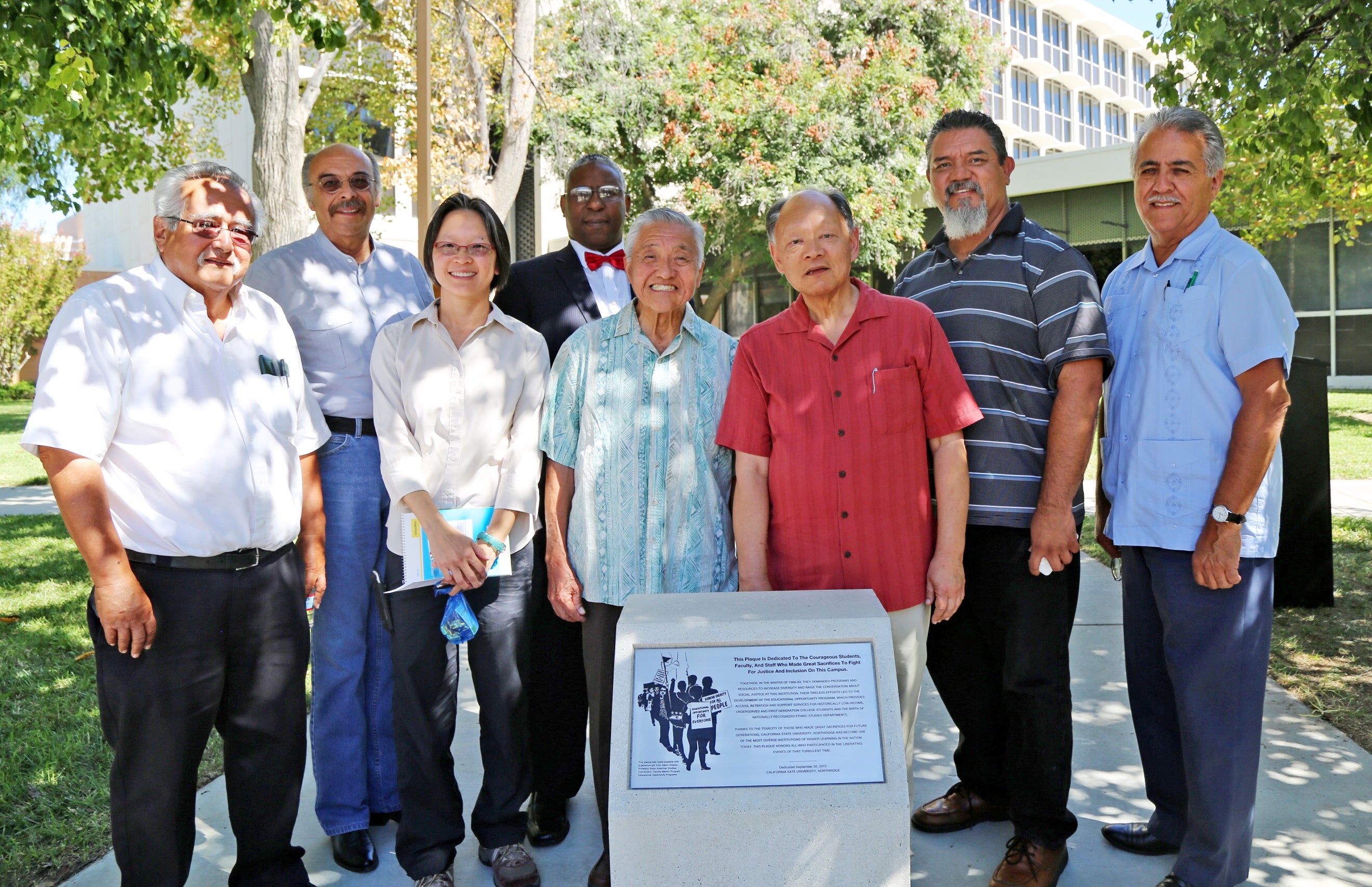 EOP Celebrates its 50 Anniversary Statewide. CSUN EOP hosts a celebration to commemorate the history of the program.

EOP leaders José Luis Vargas and Shiva Parsa reorganized the Residential Bridge Program around the foundation of mentoring and redefine the role of all Bridge staff, faculty, and student assistants in terms of serving as mentors for freshmen and for each other.

Commuter Bridge Program is added to provide a six-week academic program and a long-term learning community for additional EOP freshmen.

The EOP Convocation was created to celebrate the Residential Bridge Program Students completion of the program. These students were admitted to our campus by EOP as "special-admit" freshmen. This means that CSU rejected these students due to their low grades in high school, but EOP leaders recognized their high potential. For a summer plus three semesters, EOP leaders provided support services, especially mentors, to help these students develop their potential. These students have proven to be high-achieving individuals.