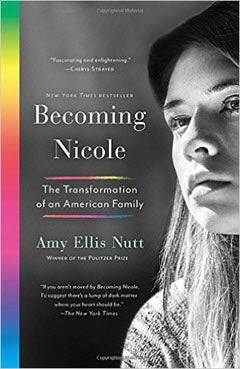 Becoming Nicole by Amy Ellis Nutt will be CSUN's Freshman Common Reading for 2018-2019. During spring 2018, faculty and staff were invited to join colleagues for a workshop-style book discussion of ways to teach and discuss the book. Workshop handouts, notes, and assignment ideas are available below.

Free copies of the book for CSUN faculty and staff, on request: we've got a deal for you

CSUN faculty and staff who would like a free copy of the book are welcome to request one by email (to Susanna: susanna.eng[at]csun.edu), by phone (818-677-6535), or in person: SH 422, Undergraduate Studies on the Roof. The usual deal will apply: one free copy in exchange for your promise to speak about the book with at least one new freshman in fall 2018. Some possible conversation starters:

Nicole Maines and her father Wayne Maines were the keynote speakers at this year's New Student Convocation. Read about their visit in CSUN Today.

With your help (and contributions from book discussion leaders and participants), this collection of resources will continue to grow. Please suggest additions by emailing susanna.eng[at]csun.edu.

Washington Post: When one male twin identifies as a female

Resources from the publisher

All Your Questions About Gender-Neutral Pronouns Answered (Teen Vogue)

The True Harm of Bathroom Bills (The Atlantic)

In the ladies room at the Oscars, a transgender moment signals a cultural shift (LA Times)

Daniela Vega: the transgender star lighting up the film industry (The Guardian)

For The Modeling Industry, The Future Is Transgender (Refinery 29)

Select resources from the book

I Am: Trans People Speak

Gay and Lesbian Advocates and Defenders

Parents, Families, and Friends of Lesbians and Gays

March 12, 2018 - Facilitated by Matthew Clements (Queer Studies Department)
Matthew gave an engaging talk (you can view his slides here) about Becoming Nicole and how it is a great example of an informative process analysis and also includes history, theory, and personal narrative. The book also has a scientific lens, in which the author discusses what happens in the womb to "create" transgender identity. He alluded to the GLAAD 2017 Accelerating Acceptance report which shows that the younger generations in this country are more likely to "identify outside more traditional binaries such as "gay/straight" and "man / woman."" He spoke of how society regulates sexuality and limits gender expression to support dominant and normative views of what is 'natural' and 'good.' Matthew spoke about how gender identity tends to manifest far earlier than sexual identity and we discussed how gender is socially constructed. He introduced the "Genderbread" person, which may help people understand the differences between gender identity, gender expression, biological sex, and sexual orientation. Matthew also introduced an extensive handout from the LAPD that includes transgender specific terms /definitions as well as problematic and preferred terms. Matthew also provided two documents with themes and topics from Becoming Nicole as well as topics with their corresponding page numbers from the book.

March 15, 2018 - Facilitated by Sarina Loeb (Coordinator, Pride Center and LGBTQ Initiatives)
In this session, one of Sarina's goals was to get faculty and staff more comfortable discussing pronouns, and so when we introduced ourselves, we also gave our pronouns. Sarina said that often people are so worried about saying something wrong when it comes to transgender students, that they're more likely not to engage at all in the conversation. In order to foster inclusion for all students at CSUN, it's better to acknowledge one's own lack of information and then educate oneself. The Pride Center has many valuable trans and non-binary resources for students, staff, and faculty, including their "Transgender 101" handout. The Pride Center also offer workshops for your classrooms or department meetings on a variety of different topics related to sexuality and gender. The group also spent time talking about gender inclusive bathrooms on CSUN's campus.

April 3, 2018 - Facilitated by Heidi Schumacher (Queer Studies / Gender & Women's Studies)
Heidi led a spirited discussion, in which we discussed gender as a social construct. Heidi thought it important to recognize that Becoming Nicole is one family's story, and how other peoples' stories might differ - for instance while Nicole knew from a young age that she was a girl, for other transgender people, this knowledge doesn't always manifest itself as early. She posed the question to the group, "At what age should we let children start to transition?" and acknowledged that people have differing views on this within the community. She mentioned that often, well-intentioned people are nervous about the language that they use when discussing Trans issues, and don't want to offend anyone. It's important to use language that is appropriate and to model in the classroom how to speak respectfully about the community. She suggested educating oneself by looking at resources from, for example, GLAAD (like this one with tips for being an ally or their Transgender FAQ). Heidi suggested the book Invention of Heterosexuality (which the Oviatt Library has in its collection). A participant mentioned this "Last Week Tonight with John Oliver" segment on Transgender Rights (from 2015).

April 5, 2018 - Facilitated by Matt Soto (Academic First Year Experiences; Residential Life)
Matt guided us through a thorough discussion and was excited to use Becoming Nicole as a tool to talk about gender and social justice and also as an opportunity for incoming students to learn how to discuss these issues. By not speaking about these issues, we may do more harm than good. Matt gave some interesting examples for how to discuss the book with students. One way to get students to identify with Nicole is to ask them, "When have you felt ostracized?" Matt led the group through the "Privilege for Sale" activity (there is also a "Privilege for Sale 2.0"), in which participants acknowledge and investigate heterosexual and cis gender privilege. "If it's something you don't have to worry about, it's a privilege."

The group discussed how sexual identity is different from gender identity. We also discussed gender pronouns, and how they are becoming a larger part of the culture. Matt suggested that calling anyone other than their (preferred) pronoun is an act of oppression. In addition, many choose not to use the word "preferred" with "pronoun" in this sense because it's not a preference - it is what you know to be true. He showed his own CSUN business card to show how you could even put your pronouns on there if you want. He introduced the group to the "Gender Unicorn" which is an update to the "Genderbread Person." The Gender Unicorn helps to distinguish between gender identity, gender expression, sex assigned at birth, who one is physically attracted to, and who one is emotionally attracted to.

April 16, 2018 - Facilitated by Amanda Harrison (Queer Studies)
Amanda led a discussion session intended to highlight how best to incorporate Becoming Nicole into a freshman level composition course. She highlighted the Faculty Staff Resources page for Becoming Nicole. Amanda talked about CSUN resources for issues included in the book such as the Klotz Student Health Center, the Pride Center, the Queer Studies program (and specifically QS 208 (Queer Health) and QS 301 (Perspectives in Queer Studies)), the University Counseling Services, and Trans Awareness week (in November).

Amanda discussed how to engage with the book in a writing class. She suggested having the students learn basic terminology by reading the glossary (pg 275) first. Her presentation includes additional points of interest for a writing class, including the use of different mediums (articles, non-fiction, podcasts, diary entries), process narrative, civic action, education processes & policies, critical reading, and service learning.

Family Grief – feelings of loss of a loved one when they transition then evolve to a new sense of gaining a loved one. You can see this clearly in Wayne’s grief: when did he feel like he lost a son vs gained a daughter?

What is the power or implication of being:

Shape statements to face your bias: "If my son wanted to have a princess party I would let him." Do you:

Becoming Nicole was chosen by this year's members of the Freshman Common Reading Selection Committee. The committee is open to all interested members of the CSUN community: students, faculty, staff, administrators, and alumni. If you'd like to join us next year, read about the Nomination Process and Selection Criteria and then email Susanna Eng-Ziskin (susanna.eng@csun.edu) to indicate your interest.

Names preceded by an asterisk (*) are CSUN students. 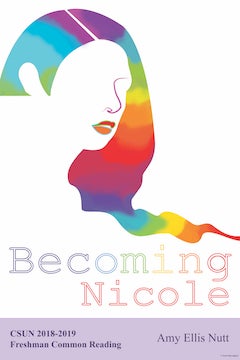 The winning poster design for 2018-2019 was created by CSUN student Zarui Boyadjian for Professor Laurel Long's Art 222 Illustration class in spring 2018. For other student designs, see the poster gallery.