PARTNERSHIP WITH THE PAD PROJECT

We are excited to announce our partnership with The Pad Project!

The Pad Project is a nonprofit organization founded by a group of high school students and their teacher dedicated to the principle that “a period should end a sentence, not a girl’s education.” In 2017 The Pad Project partnered with Action India staff to install a pad machine in the village of Kathikhera. The Pad Project’s film Period. End of Sentence., documented their journey and the impact the machine had on the women within that community.

WRRC has been awarded a grant from The Pad Project to purchase pads, liners, tampons, and menstrual cups, which will be distributed to students on campus free of charge. This partnership between The Pad Project and the WRRC will promote menstrual equity among CSUN students and work to break the stigma surrounding menstruation.

The 2012-13 Campus Action Project allows teams of faculty and students to bring awareness to the gender pay gap one year out of college and its connection to student debt.

Nine teams from around the country were selected to implement projects based on recommendations from AAUW's 2012 research report, Graduating to a Pay Gap: The Earnings of Men and Women One Year after College Graduation.

The California State University, Northridge team plans to launch "The Difference a Dollar Makes" program. Through a semester-long project embedded in a Gender and Women's Studies course called, "Women, Work and Family," students will spend the semester learning about and exploring the gender pay gap. As a culmination of this exploration, students will create installations to display around campus, along with informative signage. The installations will visually represent how the gap limits a woman's ability to financially compete in today's society.

CSUN honored Equal Pay Day on April 3, 2013. We passed out literature and cookies with 23% cut out to help visually represent the gender wage gap. We also had a salary calculator out for students to check and see what their salary range will be, based on gender.

Scrap Wage Gap is the digital campaign students from the "Women, Work and Family" course have implemented. Along with the installations, which the students are actively working to create, they have also initiated a digital campaign to help spread the word and raise awareness. Check out some of the social media students are working on:

Our focus is on the glass ceiling. We will incorporate a carnival theme to show how similar the "Big Boys" cheat people our of their money. The theme will include games that have a literal "glass ceiling" that prevent someone from winning the particular game. One specific idea is a sling shot game. There will be glass keeping the players from winning.

The Route of Gender Wage Gap group's primary focus is to change the mindset of individuals regarding the gender wage gap. Our group will present students, faculty, staff and visitors with two pathways, one will be the reality of the inequality and stereotypes women face on a daily basis, and the other will be the future, once all people are created equally. Each pathway will have a series of photos depicting what usually occurs when both males and females are ages 5, 10, 15 and 25. Each photo will have a caption describing the scene, taking place in the photo and a scrapbook where individuals have the option of writing down their personal experiences that may be similar to the scene depicted in the photograph above it. Our group hopes to show the reality of the situation the world currently faces and will have an impact on the lives of others, and prompt them to want to both create and fight for change. We also hope the future pathway shows individuals what the world we lin in could and should be, which can also have a major impact. Our group will stress throughout our installation project that women are not the only ones affected by the gender wage gap, because men and children as well.

The objective of our installation is to visually represent the disparities of financial income between men and women. In our collective project, Scrap the Wage Gap, we focus on educating other students about the stark realities of the gender wage gap. our interactive installation will demonstrate the economic race between men and women in achieving their occupational and financial goals along with the difficulties women face, despite starting at the same level post-graduation. 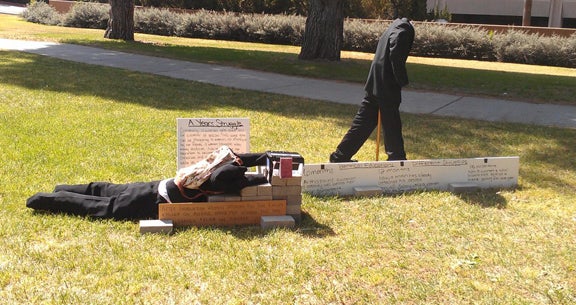 Our installation is going to be two sculptures, one of a man and one of a woman. The male sculpture will be casually walking along in a business suit of flat ground with no problems or obstacles. The female sculpture will be on an inclined ramp with a backpack on, carrying a baby and groceries. The sculptures will be stuffed, and the ramp will be make out of wood. We will include a timeline to indicate how much longer a woman must work to get to the same place a man gets. Her ramp will be longer.