The Freshman Celebration: student projects respond to the book

Jon Ronson was the keynote speaker at Freshman Convocation this fall. A video (CC) of the event is available on the Convocation website (or go straight to the YouTube video).

CSUN faculty and staff who would like a free copy of the book are welcome to request one by email (to Cheryl), by phone (818-677-6535), or in person: SH 422, Undergraduate Studies on the Roof. The usual deal will apply: one free copy in exchange for your promise to speak about the book with at least one new freshman in fall 2016.  Some possible conversation starters:

So You've Been Publicly Shamed was the featured book on October 12 (Wednesday) at the Matador Book Club discussion for faculty and staff (sponsored by HR at CSUN). The discussion was facilitated by Elizabeth Adams, AVP of Undergraduate Stuides, from 12-1 p.m., OV 16. (More)

8/18/16 How Trolls Are Ruining the Internet. Joel Stein, Time Magazine. Don't miss the Editor's Note at the end of this article.

7/25/16  Creators, fans, and death threats: Talking to Joss Whedon, Neil Gaiman and more on the Age of Entitlement by Todd Martens. Los Angeles Times, 25 Jul 2016. Closing quote: "'We're culturally addicted to outrage at the moment. We need to be more addicted to conversation.'"

7/19/16 Leslie Jones' Twitter abuse is a deliberate campaign of hate. Ijeoma Oluo, The Guardian, 19 Jul 2016: "Many on the internet were shocked and appalled when Leslie Jones, star of the recent blockbuster Ghostbusters, started retweeting some of the racist and misogynistic abuse she has been receiving in recent days....This is a deliberate campaign of abuse perpetrated on us to keep us off of the internet, and it needs to be taken seriously....It is time for Twitter and Facebook to step up and embody the commitment to free access and free speech that they claim to hold dear."

7/9/16 A bon vivant artist who got death threats for spray painting a boulder in Joshua Tree has come clean. Louis Sahagun, Los Angeles Times, 9 Jul 2016: "A well-known French graffiti artist and bon vivant who became the target of social-media harassment has apologized, saying the crime for which he was vilified stemmed from a naive impulse:  To tag a boulder in a Joshua Tree National Park parking lot with water-based spray paint, then post a snapshot of it on Instagram as a wink — a “clin d’oeil” — to his fans."

6/29/16 These Donors Quietly Gave to Anti-Tax Effort. Howard Blume, Maloy Moore, and Doug Smith.  Los Angeles Times 29 Jun 2016 B.1. Subtitle of story in the print edition: "A coalition releases names in a push to extend Proposition 30 via strategic shaming."  The article title in the online edition is "Activists reveal more dark-money donors to campaigns against unions and schools-funding tax."

6/2/16 Elizabeth Holmes and Theranos on NPR. Or for a different view, here are the search results using the key words theranos and scandal.

5/29/16 Outrage after gorilla killed at Cincinnati zoo to save child. CBS News, 29 May 2016. One of many such stories; this one mentions a Facebook page dedicated to the gorilla and a petition on change.org. (Thanks to CSUN faculty member Ellis Godard for calling attention to this story's connection to public shaming.)

4/15/16 UC Davis defends paying to remove remove pepper spray references from Internet. Sarah Parvini. This story--about the university's efforts to clean up its public image (and that of its chancellor) after the widely-criticized 2011 episode in which police used pepper spray on protesting students--offers interesting points of comparisons to Ronson's Ch. 11, "The Man Who Can Change the Google Search Results."

4/12/16: "Gunman in Texas Air Force base killing had gone AWOL, then taken mental health exam." Los Angeles Times. Excerpt: "But shortly after Bellino arrived at Joint Base San Antonio on June 30, trainers found he had 'physical problems,' especially swimming, said a source who asked not to be identified because he is not authorized to speak about the case. 'There was a little bit of a shame culture down there,' the source said. 'There were members of the staff there that were belittling him in a way that was borderline appropriate.'"

4/7/16 Social Media Shaming Has Gone Too Far. The Late Late Show with James Conden. YouTube. CC. 4:39. (This is a late-night comedy routine. Rated R, by me as your webdiva, for some slightly ribald content.)

3/25/16 Tabloid Allegations Again Fly in a Political Campaign--and Why No One Can Look Away. Domenico Montanaro, NPR. Subject: Ted Cruz vs. the National Enquirer. "It's a prime example of how social media can now turn brush fires into devastating, potentially family-destroying, forest fires."

3/27/15 This is what happened when we posted Monica Lewinsky's Ted Talk. Nadia Goodman.

2/2/15 What happened when i confronted my cruellest troll. Lindy West. The Guardian.

The so-called Eraser Button law, which became effective on Jan. 1, 2015, allows minors under certain circumstances to require that content they posted online be taken down. Does this law go far enough? Too far? Should it also apply to people 18 and older?

Journalism: Taehyun Kim, Associate Professor.  Trained as a media sociologist, Dr. Kim's primary research interests include: the effects of corporate structure on editorial vigor, analysis of the global warming skeptic's disinformation campaign, and the system maintenance function of the Korean ethnic media during the 1992 Los Angeles Riots. In 2015-2016, he received a Service Learning grant at CSUN for a project designed to help students "think critically and creatively while  exercising news judgment in the organization and presentation of information in print, visual and electronic journalistic  forms and in a  public relation format."  Dr. Kim also teaches the professional ethics of journalism in his intro to news reporting class.

Marketing: Kristen Walker, Associate Professor.  Dr. Walker was the spring 2016 Richfield Scholar at CSUN, and gave a public lecture for the 2016 Provost's Colloquium titled "Surrendering Information through the Looking Glass: Trust, Transparency, and Protection." CSUN Today has published an overview of her research: CSUN Professor Examines Transparency, Trust and Protection on the Web (21 June 2016).

Media: Jack Solomon, Professor, English: "The question of whether the new media are expressions of a democratic inversion of the old top-down mass media paradigm, or simply a new way for socioeconomic elites to maintain and expand their powers, constitutes a major part of the latest edition of my book Signs of Life in the USA.  The crucial first step is letting students know that there is a problem here that requires careful critical thinking.  They tend to take the new media for granted.  This book choice [So You've Been Publicly Shamed] is a decent start."

Social Media: Emily Olson is the Social Media Editor/Writer in CSUN Marketing and Communications, where she handles the primary university accounts. She has a background in digital communications and holds a Journalism degree from CSUN.

More about (and by) Jon Ronson

"Publicly Shamed": Who Needs the Pillory When We've Got Twitter? NPR interview with Jon Ronson. 31 Mar 2015. Listen to the story or read the transcript of the interview.

Jon Ronson and Public Shaming: Podcast Extra. 2 Apr 2015. On the Media Blog. Review of the book hosted by Brooke Gladstone.

Jon Ronson on the radio:  http://www.jonronson.com/this.html Chiefly This American Life and BBC Radio 4.

Ronson on YouTube: the spambot "three men on a couch" interview, courtesy of Escape and Control. (Thanks, Ronit Sarig!)

Who chose this book?

These members of the CSUN community chose So You've Been Publicly Shamed as the 2016-2017 Freshman Common Reading.  Starred committee members are CSUN undergraduate students. 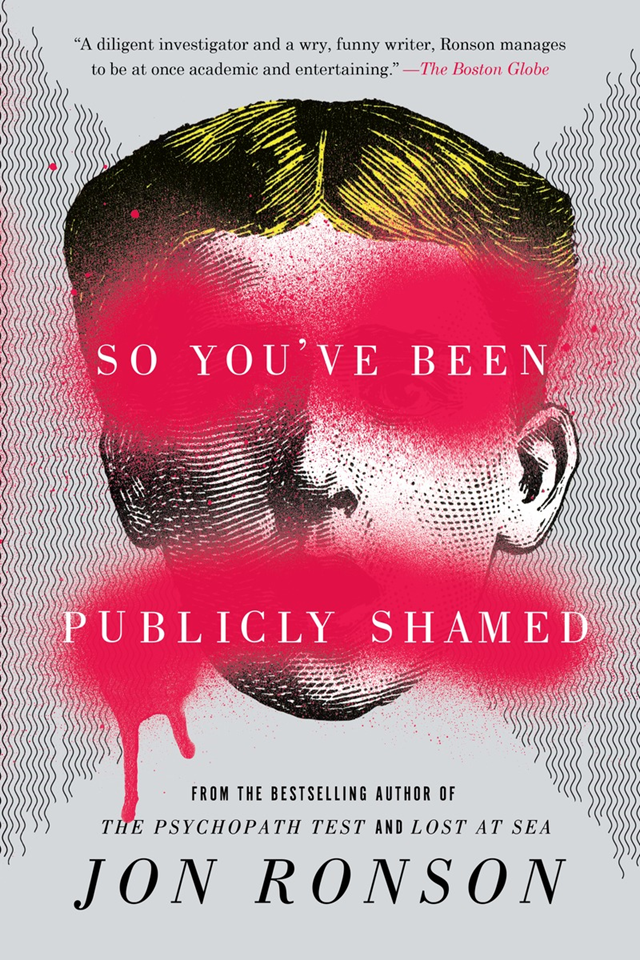 It's official: the 2016-2017 Freshman Common Reading will be So You've Been Publicly Shamed by Jon Ronson (Riverhead Books, 2015).

This non-fiction book examines the contemporary phenomenon of internet shaming.  Ronson explores what happens when "citizen justice" gets rolling on social media (Twitter, Facebook, etc.). At first he thinks public shaming is "the democratization of justice" (10). But he gradually discovers something very different:  "You don't have any rights when you're accused on the Internet.  And the consequences are worse.  It's worldwide forever" (90).

"I started reading it and didn't want to put it down!!!" (Dr. Mary-Pat Stein, Biology)

"I REALLY enjoyed the new freshman common reading—I read it in two days and just couldn’t put it down!" (Dr. Jackie Stallcup, English & College of Humanities)

"Addictive! I look at how far I've read in such a short time, and I'm shocked. More importantly, I'm eager to talk about this book with others! Reportage, moral reflection, a sense of the changing times -- all of that, and so well written, like a flashbulb going off in the brain." (Dr. Charles Hatfield, English)

"Jon Ronson always finds an inventive and crystal-clear way to portray our world's inner workings, even if they are not the most flattering portrayals." (Christine Michaels, History '16)