The College Mourns the Passing of Mary Eve Finestone 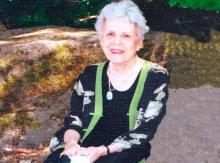 It is with great sadness that we announce the passing of Mary Eve Finestone, former member of the Department of Foreign Languages, member of the CSUN Arts Council, and wife of the late Dr. Harry Finestone, who served as chair of the Department of English from 1966 to 1970 and as dean of academic planning from 1970 to 1983. Eve was a great friend and contributor to the College of Humanities. Her leadership was instrumental in founding the Dr. Harry Finestone Memorial Award in the Department of English. The endowment was established to honor her husband’s memory, and as a lasting tribute to his contributions to CSUN and the English department. Since December 2004, the award has been given annually to the graduate student with the most distinguished essay in the study of literature.

Due to their parents’ longtime affiliation with CSUN and their mother’s support of the English department, the Finestone family has changed the memorial fund’s name to the Harry & Eve Finestone Memorial Award. The family requests that anyone wishing to honor the Finestones may make donations to this fund. For more information about making a gift, please contact Suren Seropian, Director of Development, at (818) 677- 7135, or at suren.seropian@csun.edu. You may send a check via mail. Please make your check payable to CSUN Foundation and send to College of Humanities, California State University, Northridge, 18111 Nordhoff Street, Northridge, CA 91330 – 8252.