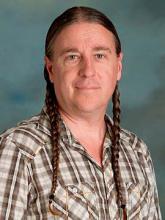 American Indian Studies professor Brian Burkhart advocates for indigenizing environmental philosophy as “an action, an activity, or a way of being,” just as native languages are centered on verbs, movement, and action. He delineates indigenous philosophizing about the environment from Western thought, the latter of which he says has a tendency to create confusion and intractability by creating false distinctions between “humans and the environment,” “material and spiritual reality,” “fact and value,” and “attitudes and behaviors.” Indigenous philosophizing, he argues, embraces far more fluid and unified sensibilities about environmental ethics and science, and the human relationship to the environment in academic discourse.

His ongoing scholarship in this area has received a boost as Burkhart has been named a 2013/14 University Research Fellow. This prestigious fellowship program is a campus-wide initiative of the provost’s office to give selected faculty the time and resources needed to conduct ongoing scholarship. Just one honoree is chosen per college, by a committee of their peers.

Burkhart will use his fellowship semester in fall 2014 to complete revisions to his manuscript “The Logic of Kinship: Indigenizing Environmental Philosophy.” “The committee agreed that Professor Burkhart’s research project is paradigm shifting, interdisciplinary, and contributes to the important dialogue on sustainability and environmental activism,” Humanities dean Elizabeth Say wrote in announcing the decision. “The committee also asserted that his project will impact discussions of global philosophy, ethics, and diversity in theorizing environmental science.”

Burkhart is an enrolled member of Oklahoma’s Cherokee Nation and lived for many of his formative years on Navajo Nation territory in Arizona. Burkhart earned his Ph.D. in philosophy, informed by Native American literature and religious studies, at Indiana University. On arriving at CSUN in 2010 he immediately set about applying his interdisciplinary perspectives to courses in American Indian Studies, philosophy, and sustainability. Burkhart said that his mentor, Vine Deloria, Jr., once told him that “[Native American scholars] needed to create a new conversation about their lives and tell a better, more complicated philosophical story.”

“Professor Burkhart’s scholarship challenges his colleagues in Philosophy to open up new spaces in the discipline,” said Dean Say. “His work brings an important and heretofore ignored perspective to the field of study, particularly as he engages environmental philosophy, itself a relatively new area of philosophical inquiry. In this sense, we might say that he is bringing one of the oldest perspectives, indigenous thought, to an ancient area of concern, the relationship of humans to the natural world, and creating a new and exciting way to engage both of these.”

Burkhart is under contract with State University of New York Press, which has expressed interest in publishing his manuscript as early as fall 2014 as part of its Indigenous Philosophers series. The College of Humanities congratulates him on his success.