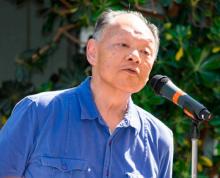 On April 29, 2014, over one hundred CSUN faculty, administrators, students, and community members gathered at 18356 Halsted Avenue—at the northwest periphery of campus—to rename the Asian House in honor of Professor Glenn Omatsu. The weather was hot and windy for the Glenn Omatsu House Dedication— which attracted too many attendees to accommodate indoors— and guests stood at the ready to hold down canopy poles to make sure the sunshade didn’t fly away! People variously know Professor Omatsu as a teacher, a long-time activist, an ally, a mentor, a benefactor, and even a surrogate father. He is an example of a great human being, who symbolizes unity, harmony, and militant humility working for social justice.

A new plaque was set in the house and “recognizes Professor Omatsu’s lifetime of mentorship, of building community, and of struggle, and in the hope that each generation listens, teaches, and commits to building a new world.” The plaque further provides a brief history of the house, which was assigned to the Asian American Studies Department in 1992 as an activities center for Asian American students and community members. In fall 2008, AAS volunteered to share the house with the Women’s Research and Resource Center, which had just burned down. “In the interests of solidarity we continue to share the Glenn Omatsu House today,” the plaque continues, “may we remember and honor Professor Omatsu’s commitment.” Most importantly, the plaque displays Professor Omatsu’s message: “Asian American Studies and Ethnic Studies belong to students and our communities.”

There is a Vietnamese saying that when you eat a fruit, you need to remember the gardener and the conditions that gave rise to the fruit. The sun, the rain, the soil, the bees are all elements that made the fruit possible. The dedication included ceremonial recognition of those who previously occupied the land. These included Chinese, Japanese, Filipino, and Mexican farmers whose lands were taken from them by eminent domain. Also included were the Fernandino Tataviam indigenous people of the San Fernando Valley, who lost most of their land in this Valley through deception and violence.

Omatsu in Japanese means great/big pine. May the Glenn Omatsu House facilitate deep roots in our community and thrive to shade all peoples.

Personal messages of appreciation may be sent to Professor Omatsu at: glenn.omatsu@csun.edu.