From Soul Train to Sierra Hall 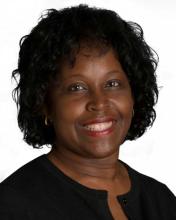 When first asked to participate in a brief interview for this newsletter profile, the new College of Humanities associate dean, Karin Stanford, said, “Sure. Which side do you want to know about, the academic one, or the one where I grew up wanting to be a Soul Train dancer?” While she was delighted to share tales of childhood longing from the latter category, her lived career trajectory is just as singular and engaging, from education to political life to scholarship and community service.

After earning her Ph.D. in political science at Howard University, she received a two-year post-doctoral fellowship from the University of North Carolina, Chapel Hill, and later served as a Congressional Black Caucus Fellow under Congressman Sanford Bishop of Georgia. Since joining CSUN’s Pan African studies faculty in 2003—following a stretch at the University of Georgia—Dr. Stanford has taught courses in African American politics; social movements; the politics of hip hop; and gender, race, and class in public policy. In 2010 she was elected to chair her department, a position she held until she came to serve as associate dean of Humanities in fall 2013.

Humanities dean Elizabeth Say values Stanford’s prior experience on a number of fronts. “Her previous service as department chairperson for Pan African studies means that we have added an experienced administrator, who was able to immediately manage the duties of associate dean,” said Dean Say. “Karin is also opening new opportunities for collaboration between CoH departments and Pan African studies, to the benefit of our students.” As the PAS department is housed in the College of Social and Behavioral Sciences, Stanford’s transition to Humanities has her interacting with an entirely new slate of departments and programs. “The learning curve is higher since I am also becoming familiar with a different college at the same time,” Stanford said. “It’s challenging, but also rewarding.”

Though Stanford said she misses her daily interactions with her Pan African studies colleagues, she values this opportunity to learn more about the intricacies of how curriculum works at the college and university levels. Plus, there are all those new Humanities departments and programs she’s getting to know. “Interacting with the faculty and recognizing the importance of their work and how much they value the students and departments, that’s been very gratifying,” Stanford said. “It is a very collegial atmosphere. I feel lucky.”

As a scholar, Dr. Stanford has received several awards and recognition for her publications. If We Must Die: African American Voices on War and Peace won the 2009 Outstanding Reference/Academic Book Award from Choice magazine. Her article “Keepin’ It Real in Hip Hop Politics: A Political Perspective of Tupac Shakur,” published in the Journal of Black Studies , has remained one of the journal’s most read articles since its publication in 2011. Her book Beyond the Boundaries: Reverend Jesse Jackson in International Affairs won the National Conference of Black Political Scientists’ Outstanding Book Award in 1998. And in 2005 she published Breaking the Silence: Inspirational Stories of Black Cancer Survivors , which highlights disease prevention and treatment options as well as inequality in health care. Stanford serves on the advisory board of the California Black Women’s Health Project and provides consumer reviews of scientific proposals and federal initiatives on breast cancer research.

“The College of Humanities is extremely fortunate to have Karin Stanford as associate dean,” said Dean Say. “She’s a nationally recognized scholar, and I look forward to working with her as we plan for the future of the college."