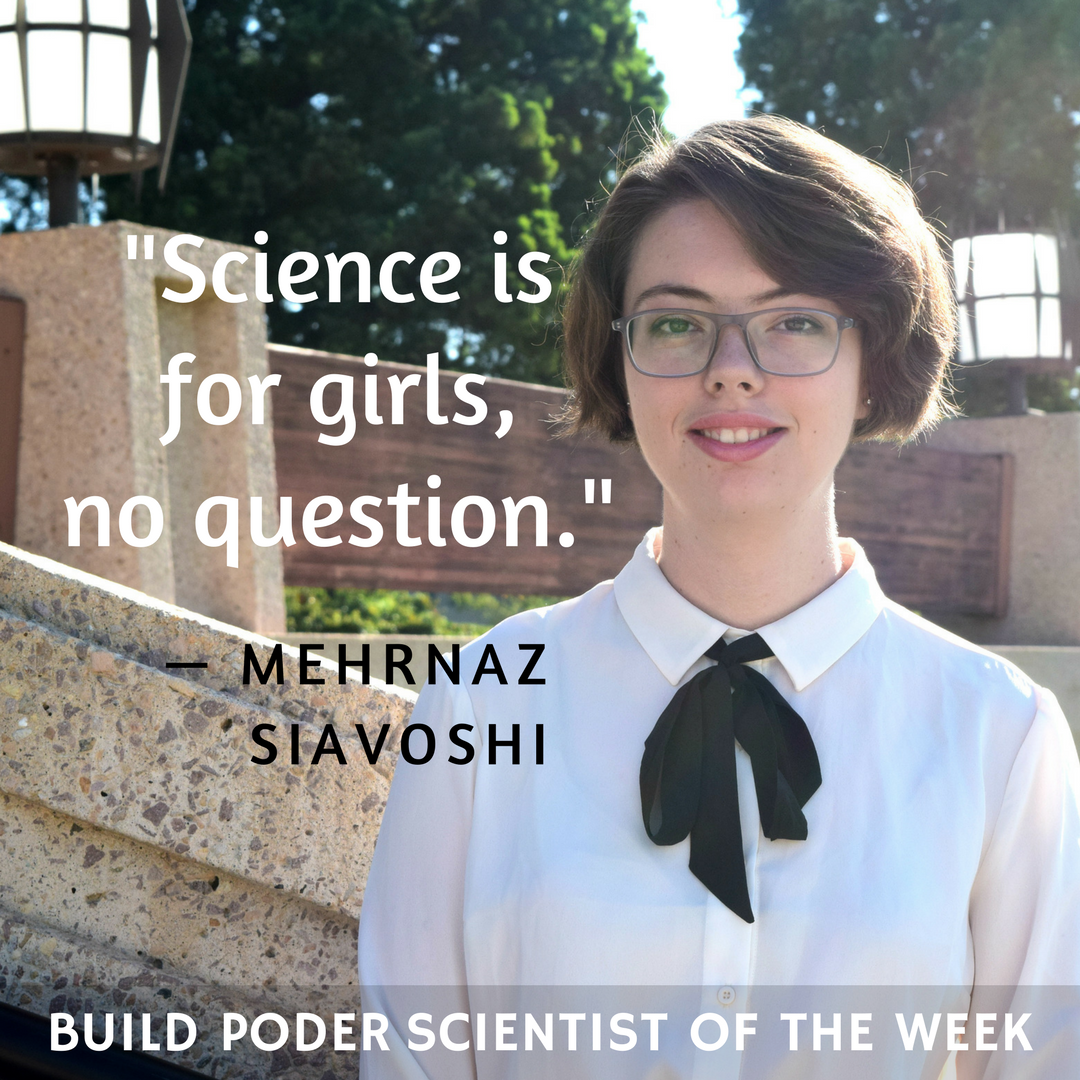 BUILD PODER trainee Mehrnaz Siavoshi always had a curious scientific mind. As a child, math was Siavoshi’s favorite subject because she loved figuring out difficult puzzles. She liked learning about the intricacies of the human body and fondly remembers enjoying a book called “Uncover the Human Body,” which contained a 3D model of the human body that revealed a different system of the body with each turn of the page. Siavoshi also enjoyed learning about astronomy. One of her most prized possessions was a book called “101 questions about space,” a present from her uncle that she read from cover to cover many times.

Siavoshi grew up in Calabasas, California and attended Oak Park High School. A stellar student who graduated with 13 AP exams under her belt, Siavoshi learned early on that determination and drive were critical to her success.

“I was one of three girls in my physics class of 28 students,” Siavoshi said. “It made me really determined not to get discouraged. I remember getting 100 percent on my first physics exam and it was so affirming of my abilities. That’s when I knew that science is for girls, no question.”

Siavoshi went to Los Angeles Pierce College and earned an associates degree in general sciences and another one in behavioral sciences before she transferred to California State University, Northridge as a biochemistry major. She learned about BUILD PODER at a tabling event at Pierce and knew immediately that it was the program for her.

“I had never done research at that point and wanted to get into a lab, but I had no idea how,” Siavoshi said. “BUILD provided a very clear map for the journey of becoming a researcher.”

Siavoshi began BUILD PODER with Summer Jumpstart this year at CSUN and is working in a lab run by Dr. Sattar Taheri-Araghi, a professor in the CSUN Department of Physics and Astronomy. Her lab is studying antimicrobial peptides (AMPs), which are proteins part of the innate immune system of all multicellular life.

“We don’t know exactly how or why they work,” Siavoshi said. “So my project is mixing the AMPs with traditional antibiotics and doing a computational analysis on the data to see if there are any interactions between the molecules. With the data, we can make better-informed decisions about which antibiotics to give patients based on which AMP is present in the infected body system.”

Siavoshi is excited to be making an important contribution to the scientific community with Dr. Taheri-Araghi.

“I’m really thankful I got matched with this mentor,” Siavoshi said. “Dr. Taheri-Araghi has a very unique way of looking at things because he has a physics background. So I’m learning how to analyze problems differently from how a biochemist would approach them.”

After her career ends at CSUN, Siavoshi plans to pursue an M.D.-Ph.D, which would allow her to practice medicine as well as contribute valuable knowledge to her field. Already a licensed EMT, Siavoshi is interested in practicing emergency medicine.

Eventually, Siavoshi desires to come back to a teaching university like CSUN to mentor young scientists such as herself.

“I want to be a resource to students like me who are trying to achieve sometimes seemingly impossible things,” Siavoshi said. “I want to show them that if I can do it, so can they.”