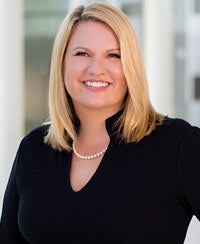 Dr. Erika D. Beck began her leadership of California State University, Northridge in January 2021 and proudly serves as the fourth consecutive female president. A strong advocate for the power of higher education to improve lives, transform communities and promote social mobility, President Beck champions the academic success of students in the attainment of their highest educational aspirations and as future leaders prepared to excel in today’s rapidly changing economy and society. Her unwavering commitment to advancing equity, inclusion and justice are the foundation upon which she leads institutions of higher learning to facilitate human potential while advancing knowledge that serves the public good.

Immediately prior to coming to CSUN, Dr. Beck served as President of CSU Channel Islands from 2016 to 2021. She was Provost and Executive Vice President at Nevada State College from 2010 to 2016 where she previously served as the Dean of Liberal Arts and Sciences and a tenured member of the psychology faculty. President Beck was a research associate at the Salk Institute for Biological Studies. She earned a bachelor’s degree in psychology from the University of California, San Diego, a master’s degree from San Diego State University, and a Ph.D. in experimental psychology from the University of California, San Diego.

As President of CSU Channel Islands, Dr. Beck launched the President’s Advisory Council on Inclusive Excellence, the President’s Advisory Council on Cultural Protocols, and led a successful revision to campus recruitment and retention practices to expand equity and diversity. Under her leadership, the campus received the inaugural “Seal of Excelencia” from Excelencia in Education for leadership, practice and success in serving Latinx students.

While at Nevada State, she advocated for shared governance and founded the first faculty senate on campus, spearheaded the campus plan that improved graduation rates and closed equity gaps and led to the college being named a Minority Serving Institution, a Hispanic Serving Institution, and the most diverse campus in the Nevada System of Higher Education.

President Beck was named one of the Most Influential Leaders in Education by the Pacific Coast Business Times and Woman of the Year by the California Women’s Caucus, and has served on numerous boards and commissions. She is currently a board member of the Los Angeles Chamber, the Los Angeles County Economic Development Committee, the Big West Conference and the finance committee of the American Association of State Colleges and Universities. President Beck enjoys running, yoga, and perpetual conversations with her sons about how many more minutes until “we get there.”