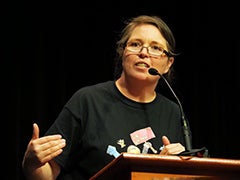 Martha D. Escobar is Professor in the Chicana and Chicano Studies Department at California State University, Northridge (CSUN). She received her doctoral degree in Ethnic Studies from the University of California, San Diego. Escobar is the author of Captivity Beyond Prisons: Criminalization Experiences of Latina (Im)migrants (University of Texas Press, 2016), which received the National Association for Ethnic Studies’ 2017 Outstanding Book and Media Award.

In addition to her scholarship, Escobar has a strong commitment to promoting equity and social justice. She is the Executive Director for Project Rebound, a campus resource dedicated to supporting formerly incarcerated students succeed at CSUN. She serves as chair of the Educational Equity Committee, which is part of the Faculty Senate and charged with examining educational equity on campus and making recommendations. Escobar is also an Advisory Board for the Center for the Study of the Peoples of the Américas (CESPA), which promotes interest in and knowledge of peoples descendent of Latin American communities through service, learning, and research. Finally, Escobar is a member of Civil Discourse and Social Change, a campus-wide initiative that promotes social justice at CSUN and beyond through educational programming and action.

Lily Gonzalez is the Program Coordinator for Project Rebound at CSUN, a CSU support program for formerly incarcerated students. She is a co-founder of Revolutionary Scholars, a student organization grounded in prison abolition and supporting formerly incarcerated and system impacted students. Lily has been awarded the Just Leadership USA, 2017 Leading with Conviction Fellowship, Rockwood Leadership Institute’s 2018 Returning Citizens Fellowship, and the CSUN 2018 Newman Civic Fellowship. She graduated from CSUN in 2017 with a B.A. in Chicana/o Studies, and is currently completing her Master’s in Arts in Chicana/o Studies.