This story and video are selected from a more comprehensive piece in CSUN Today. Find out about other remarkable students from across the CSUN Campus in CSUN Today. 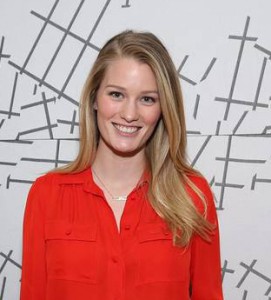 Ashley Grace, 31, started working as an actor at age 16, and her career took off. Ten years later and a number of successful television shows and films, including the “The Arrangement,” “StartUp,” “True Detective,” “Chronicle” and “True Blood,” Grace was about to get married and was reflecting on the path her life had taken.

“I realized that I kind of bypassed what I had always felt my passion in life was — to work with children,” she said. “My circumstances led me to film and TV and, because it was working out for me, I never really challenged myself as to whether or not that was what I wanted to do with my life. I realized that if I didn’t go to college, I wasn’t going to have the opportunity to explore options in the future because I wasn’t, frankly, going to be qualified.”

She worried she was going to be “so much older than my fellow students and it was going to take so long,” she said. Her husband, actor Topher Grace, encouraged her to apply, saying the sooner she started, the sooner she would have her degree. He assured he supported her decision and would be there when she needed him.

She started at Santa Monica City College to get her general education requirements out of the way. Ready to transfer in 2017 to a four-year institution, Grace, then pregnant with her first child, weighed her options. She considered going to another university, but then thought “or should I go to the school that has the best program for my interests, child development, which was CSUN?”

Her major became clear when she learned a child in her extended family was suffering from abuse and neglect and needed to be removed from their home. Grace struggled to help from hundreds of miles away.

“I knew, from first-hand experience, how difficult the social welfare system and foster care system are because I was trying to navigate them for a child I loved very much,” she said. “I realized that this is a place where I can get involved.”

Just months after starting at CSUN, Grace had to take a break from school when her daughter was born with health complications.

“It really freaked me,” she said. “I was thinking, ‘Am I never going back to this?’ But I quickly realized that if you are really passionate about something, and it’s also playing out in your life, it’s a priority to you.”

She returned to school in 2018, and immersed herself in her classes. She also began volunteering with Court Appointed Special Advocates (CASA) of Los Angeles, a nonprofit that advocates for children who have experienced abuse and neglect. Grace combined what she learned in classes with her film and television experience for her senior honors project, a short film about CASA of Los Angeles’ work.

Grace, now about to give birth to her second child, said that pandemic has given her time to think about the future.

“In the short term, we’re living in a world where I’m not exactly sure what things are going to look like tomorrow, or what things are going to look like next year,” she said. “I’ve realized that my passion really lies in helping children. It’s fun to be in Hollywood, and it’s exciting to be an actor. But if that’s not what you’re passionate about, it doesn’t really matter what other people perceive your life success to be. For now, I am trying to utilize my success in both fields.”

She has written a script loosely based on her experiences with CASA of LA and the situation of her extended family member. She said she is hoping to direct that film next year.

“In the long term, I plan on getting a master’s and, potentially, a doctorate,” Grace said. “I want to continue to research child trauma and the effects of it, and hopefully add something to the field because I think it’s so incredibly important.”

This story and video are selected from a more comprehensive piece in CSUN Today. Find out about other remarkable students from across the CSUN Campus in CSUN Today.