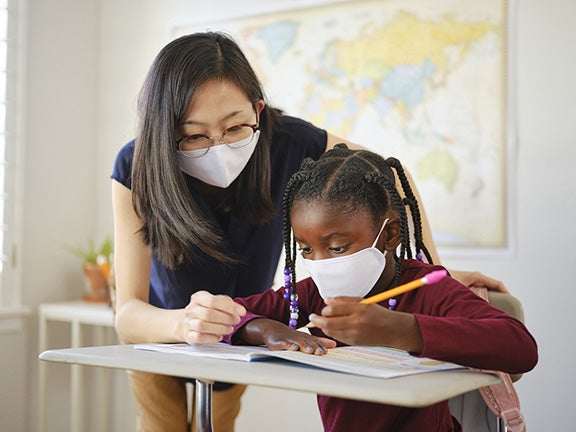 Right: An elementary-aged school student and teacher in a classroom, both wearing masks for protection against infectious disease. Image courtesy of RichLegg, iStock

Children of color are often treated as more mature that their white counterparts, having to face the stresses of racial biases from a young age. And because of the color of their skin, they are often perceived as more mature by society and forced to take on more responsibility, according to California State University, Northridge child and adolescent development professor Virginia Huynh.

Huynh called the perception that children of color grow up faster than their white counterparts not only false, but harmful.

“White kids have the privilege to not consider how race plays a role in their life, but kids of color must confront it,” said Huynh, who teaches in CSUN College of Health and Human Development. “And kids of color are treated as adults earlier than white kids, which can affect school discipline and treatment from law enforcement.”

Huynh’s research focuses on understanding social and cultural factors — such as discrimination and ethnic socialization — that influence the academic, psychological and physical well-being of ethnic minority and immigrant children and adolescents.

Stress, including the stress of racism, can trigger early puberty in children, Huynh said, adding that the same cannot be said about a child’s psychological development. Huynh dispelled the notion that children of color mature faster than their white counterparts. Children of color just have to “confront things white kids don’t have to,” she said. 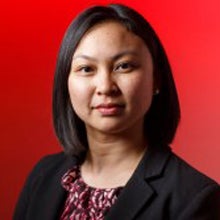 Huynh pointed out that a 13-year-old Black child being racially profiled by a police officer is no more developmentally mature than a white child who doesn’t face racial profiling. The only difference, she said, is their experience.

She added that what happens in a classroom can have an important impact on a child’s life. She used the example of a white classmate making a joke about race.

“A child of color has to consider how to react,” Huynh said. In class, teachers can carry an unconscious bias against students of color that these students will have to face nearly every day. Research shows that if a child acts out or is accused of acting out, adults are often more likely to give white children the benefit of the doubt than children of color.

Taking on the responsibility of navigating racial bias can negatively affect the self esteem, mental and physical health of children of color, she said, adding that the stress can have an impact on a child’s health. The stress, she said, can make them feel physically ill.

“Teachers need to pay attention to and acknowledge any ideas that they hold about any student based on their names, race, or background,” Huynh said. “By bringing these thoughts to their awareness, teachers can more consciously avoid applying the assumptions when interacting with or evaluating students.”