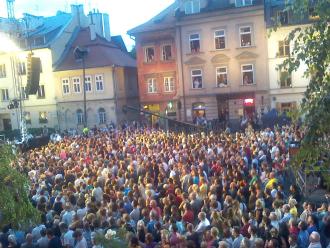 What does Jewish cultural and religious renewal look like in a land where more than 90% of the Jewish population was murdered during World War II, and the survivors left or went underground during post-war Communist rule?  Join us for an exciting panel discussion about the amazing Jewish cultural and religious revival in Poland today. Our special guests include a writer, a musician, and a scholar.

Agnieszka Ilwicka, a Poland-born Yiddishist, will reflect on her journey through Yiddish language and culture with the last native Yiddish speakers in Poland, Europe, Israel, and the United States. She also will share her experiences teaching the Yiddish language at the University of Wroclaw, Poland.

Piotr Menachem Mirski will discuss his work in Poland as a musician, lay cantor, songwriter and philosopher.  He leads the Polish neo-klezmer band, the Klezmaholics. He recently served as culture manager for projects related to Lublin’s Jewish history and legacy. In 2015 Mirski began teaching "Judaism - Step by Step",  an introduction to Judaism course in Gdańsk.

Ellie Shapiro will describe her research in Krakow for a Ph.D. at Graduate Theological Union (Berkeley) on performances of Jewish culture in small Polish towns today.

Also participating will be Neal Brostoff, the founder and director of the Jewish Music Foundation.

This event is co-sponsored by the Jewish Music Foundation and the Sigi Ziering Institute.

(above: The Jewish Culture Festival in Krakow, Poland)

This event is now fully booked. Only people with RSVPs will be allowed in the room.