Lecture on The First Emperor of Qin and His Empire 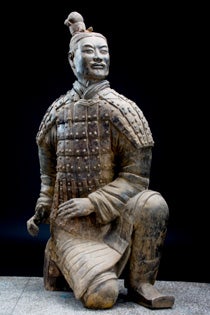 Prof. Wei Cao is a Professor of History at Shaanxi Normal University (which is one of CSUN’s first partner universities in China) and the Chief Curator of Emperor QinShiHuang’s Mausoleum Site Museum (also known as Terracotta Warriors Museum). Prof. Cao is one of the leading experts on Chinese archeology, and has published numerous books and articles. Prof. Cao holds visiting professorship at Chinese Academy of Social Sciences, Beijing University, and University of London. He has been to many countries (including the United States, South Korea, Australia, Spain, France, England and Canada) for academic exchanges.

This lecture is sponsored by CSUN China Institute and the College of Humanities. It is free and open to the public. Campus map is available at this link, www.csun.edu/csun-maps, and public parking is available on campus (www.csun.edu/parking/visitor-parking-information).  Please contact Dr. Weimin Sun at weimin.sun@csun.edu (818-677-6461) for more information.