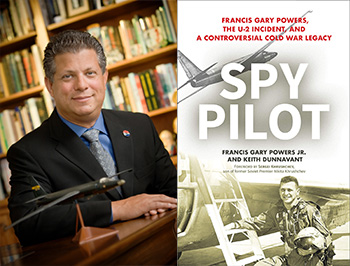 This event is sponsored by the Friends of the CSUN Library and Tseng College.

The downing of the American U-2 spy plane piloted by Francis Gary Powers over the Soviet Union on May 1, 1960 is one of the most talked about events of the Cold War. As the famed pilot’s son, Gary Powers, Jr. has written Spy Pilot with acclaimed historian Keith Dunnavant to present the facts and dispel misinformation about the Cold War espionage program that his father was part of. The book presents new account of Powers's life based on uncovered personal files, including old audio tapes, letters his father wrote and received while imprisoned in the Soviet Union, the transcript of his father's debriefing by the CIA, other recently declassified documents about the U-2 program, and interviews with the spy pilot's contemporaries. Gary’s work is a passionate son's journey to understand his father, pursuing justice and a measure of peace.

As the Founder and Chairman Emeritus of The Cold War Museum in Virginia founded in 1996, Gary Powers, Jr. is fulfilling a mission to honor Cold War veterans, preserve Cold War history, and educate future generations about this time period. As Chairman of the Presidential Advisory Committee for the Cold War Theme Study, he works with the National Park Service and leading Cold War experts to identify historic Cold War sites for commemorating, interpreting, and preservation. In Hollywood, Gary consulted for the Steven Spielberg Cold War thriller, Bridge of Spies, about James Donovan who brokered the 1962 spy exchange between KGB spy Rudolph Abel and CIA U-2 pilot Francis Gary Powers, Sr.

Gary is also a Board Member of the Strategic Air Command and Aerospace Museum, and an Honorary Board Member of the International Spy Museum. He holds a Bachelor of Arts Degree in Philosophy from California State University, Los Angeles, and a Master’s Degree in Public Administration/Certification in Non-profit Management from George Mason University. In 2019, Gary graduated with his Master’s Degree in U.S. History from Adams State University. You will find Gary giving international lectures and appearing regularly on C-SPAN, the History, Discovery, and A&E Channels.