Since 2012, the Pride Center has been committed to providing equitable resources and services to ensure a welcoming environment for LGBTQIA+ students at CSUN. Bowie Karr is a senior Film Composition major who is a student assistant at the Pride Center and recognizes they/them as pronouns. This is their story about how finding the Pride Center has made an impact on their life.

For Karr, finding the Pride Center came during a life-changing mishap. Karr was expecting to get a full campus tour from Associated Students but arrived too late. This urged them to explore campus on their own.

“I kind of walked around campus looking at where everything was, entered the University Student Union (USU) building and walked upstairs to find the Pride Center,” said Karr.  “Every week since I have at least spent a day at the Pride Center.”

The Pride Center, which Karr describes as the “stronghold LGBT safe space on campus” and a “second home away from home,” is located on the second floor of the USU’s Sol Center. It is a place where folks can express themselves around their peers through community-building events.

Karr had most of their classes at Cypress Hall, where only a few social programs took place, leaving them feeling separated from the community of CSUN. That is where the Pride Center came in and provided Karr a chance to meet their peers and create close friends. 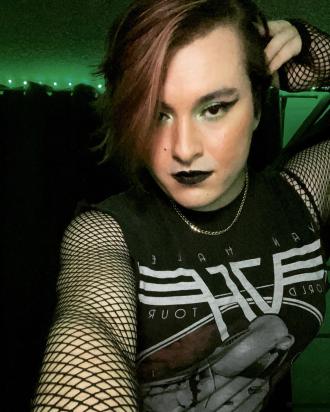 After visiting the Pride Center for a year, Karr applied and was hired as a Student Assistant because they wanted to help provide a safe space for LGBTQIA+ students.

“Since its origin, we’ve developed it [Pride Center] into a space for students to share sensitive topics. T-Time was one of our most popular and still is one of our longest-running support groups on campus for the transgender community,” said Karr.

Since being hired as a student assistant, Karr's work in the Pride Center revolves around trans advocacy. In the past, Karr was a facilitator for T-Time, a weekly program for trans folk to discuss their experiences and offer advice and support for one another. They and their co-worker, Erin, brought in guest speakers to help guide conversations about specific topics within the trans community. Karr also was co-coordinator for Trans Visibility Week, where they held an educational seminar and a vigil.

With the help of Pride Center coordinators, Karr has organized trans town halls for folks to voice their concerns about issues such as deadnaming — calling a trans or nonbinary person by their legal name rather than their preferred name.

Currently, Karr is working on the legal name change clinic as well as trans programming and equity services.

From the get-go, the Pride Center allowed Karr to learn more about their identity by understanding asexuality and the trans spectrum, genderfluidity and demisexuality. Karr said friends at the Pride Center were supportive and even offered helpful advice.

However, the journey to learn about their identity was a rough road. Before coming to CSUN, Karr was an out bisexual in 2016. Karr described navigating their sexuality during that time as a “secretive game” because of their large family being connected to their hometown. Things were not easy as their identity resulted in discrimination.

“In late 2016, I was fired at my first job at the UPS store, because a majority of my coworkers were Christian college students, and I was an out bisexual,” said Karr.

“That was not okay with the employers, so I was receiving less and less hours. I was fired due to too many tardies across a year and a half, to which I still believe that it was because I was queer and didn't align with the owner's Christian values.”

Realizing Karr was not cisgendered, they started visiting the OUTreach Center in Lancaster, which is a local LGBTQIA+ center, and they started to learn more about themselves. This played a significant role when coming to the Pride Center as Karr found themselves talking “a little bit more out loud” during T-Time and making trans friends.

Karr said that although they are dedicated to trans activism, they have the privilege of being cispassing, which is when a trans or nonbinary person is seen as cisgender and as a result, experiences less judgment. They want to ensure that they do not take the space away from trans folks of intersectional identities, but rather help foster it for them.

“I understand I'm privileged and deeply privileged as somebody who is cis-passing, which means that I am able to go without wearing makeup, without wearing prosthetics or any clothing that could edit my features; I can pass as a straight cisgendered individual,” said Karr.

When it comes to liberation through their work, Karr believes there is still progress to be made, because they and their trans collegiates still experience being misgendered and deadnamed.

“There's still a lot of work to be done.  I don't want to say it's never going to be a happy ending, but we are nowhere near the final chapter of this book,” said Karr.

Outside of the Pride Center, Karr’s activism continues with the Stonewall Democrats, a Los Angeles Trans Advisory Council, and the CSUN LGBTQIA+ Advisory Committee.

“There's a chance for a much brighter future for the LGBT population on campus,” said Karr. “And I look forward to being a part of that.”

For more information on the Pride Center, please visit csun.edu/pride.