What is an audio description?

Audio descriptions are audio tracks or transcripts that contain narration of onscreen movement or visuals. They are mainly intended for users with visual impairments such as blind and low vision users. Audio descriptions have a narrator that describe critical content that is not conveyed through audio such as settings, graphics, and on-screen activity. Audio descriptions are commonly used for pre-recorded material such as video tutorials, video resources, and instructional videos.

There are three types of audio descriptions: 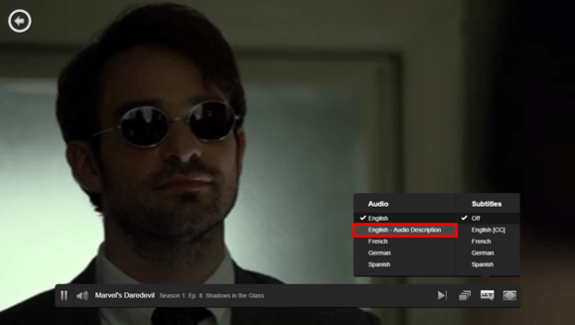 Do I need audio descriptions?

Why do we need descriptions?

How to create an audio description

According to the Digital Gov article, How to Make Audio Descriptions there are three methods to creating audio descriptions.

(Derived from: YouTube- Descriptive Video demo on The Lion King)

The example below is a video with audio description. The audio describer announces the movement of characters, their facial expressions and any on-screen action occurring in the video.

The following is an audio description transcript provided by the American Foundation for the Blind.

The transcript shows the correct method to use the audio and audio description tracks.  In the video, TV host, Jeff Corwin is the speaker. In addition to Jeff, a "female narrator's voice" serves as the audio describer. When Jeff swims towards an object and the female narrator announced his movement in the transcript by saying, "Jeff swims among the fish and kelp in the deep water. He points out a flower shape".  Jeff then begins to talk about the flower shape object. For users who are unable to see the content in the video visually, it would be difficult for them to comprehend what Jeff is referring to. There is a written transcript below the video.

Female narrator's voice: Jeff swims among the fish and kelp in deep water. He points out a flower shape.

Jeff Corwin: There are its tentacles, and there's its mouth.

Bonnie Chen: "These photos were all taken at the Everglades."

Bonnie Chen: "Today you will pretend to be a species of wading bird that has a beak like this."

Describer: The teacher holds two of the sticks to her mouth making the shape of a beak.

Read more about W3C examples of an audio description transcript

Audio descriptions can be implemented using HTML5 elements. Essentially, this method is not recorded by an audio describer, but the script is embedded so that assistive technology is able to announce the content to users.

The <video> and <track> element are used to create the script. The track element allows content creators to embed the audio description transcript and have the timing synchronized with the video. There are five types of tracks content creators could choose from captions, subtitles, chapters metadata, and descriptions. The precise timing allows for the text to be read by screen readers during general reading pauses.

Example: The following is an example of a Web Video Text Tracks text file from Terrill Thompson’s blog, an accessibility specialist from the University of Washington. Audio Description Example