The Far Away Brothers: Faculty and Staff Resources 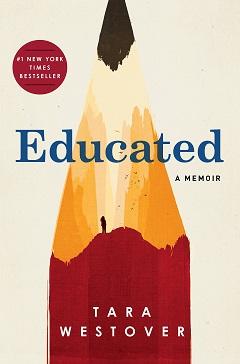 The Far Away Brothers: Two Young Migrants and the Making of an American Life by Lauren Markham will be CSUN's Freshman Common Reading for 2019-2020. During spring 2019, faculty and staff joined colleagues for a series of workshop-style book discussion exploring ways to teach and discuss the book. Workshop handouts, notes, and assignment ideas from those discussions are available below.

With your help (and contributions from book discussion leaders and participants), this collection of resources will continue to grow. Please suggest additions by emailing susanna.eng[at]csun.edu.

NPR book review: These 'Far Away Brothers' Remake Themselves In America

Popmatters review: 'Far Away Brothers': What Becomes of the Children Who Must Flee Home and Country?

If These Walls Could Talk: The strange history of our futile border fortifications (Harper's Magazine)

Newsom seeks to counter Trump as he makes world stage debut in El Salvador (LA Times, with a quote from Douglas Carranza, chair of the Department of Central American Studies)

Salvadorans Weigh In On How They View The U.S. Immigration Situation (npr)

With violence at their backs, a new migrant caravan heads north (National Geographic)

What Is Temporary Protected Status? (CFR)

Going home after half a lifetime (The Washington Post)

5 Facts on Migrants Coming to the U.S. (US News and World Report)

The Obstacle is the Way: Resilience in the Lives of Salvadoran Immigrants in the United States: Transcending Acculturation and Xenophobia (chapter from book, Latinx Immigrants. eBook available through OneSearch)

With Legal Status Ending, A Salvadoran Dad Must Leave His Family Or Live In Hiding (CT Public Radio)

American Girl: A Story of Immigration, Fear and Fortitude (The Washington Post)

An Asylum Seeker’s Journey from El Salvador to Arkansas, and Back Again (The New Yorker)

Global Mental Health in Our Own Backyard: An Unaccompanied Immigrant Child's Migration From El Salvador to New York City (Journal of Clinical Psychology. Link may not work off campus. Search article title in OneSearch)

Psychologists Respond to Mental Health Crisis at the Border (APA)

Jennie began the session with an icebreaker activity that highlighted the importance of creating networks in your life.

Immigration can be tricky to talk about in the classroom as we never know students' experiences. It helps to create ground rules; in fact the students can help create those rules for themselves. If the material is difficult, Jennie recommends talking to students about student services on campus like University Counseling Services, DREAM Center.

Some of the themes from the book include civil war in El Salvador, US immigration laws, Sanctuary cities, violence, trauma. Jennie suggested a classroom activity using the QAR method to help discuss the book with students.

Jennie shared the following resources to help discuss the issues in The Far Away Brothers:

A limit situation, quite simply, is any situation which limits you and is an obstacle to your development, survival, pursuit of goals and ambitions. In the context of Freiere, it is those limiting situations that prevent us from becoming fully human.

In response to a limit situation, people can either accept the limiting nature of it, or they can plan and carry out an action to counter the situation. This is the Limit Act – doing something to see what is beyond the obstacle.

Themes from The Far Away Brothers

The group discussed some of the themes from the book that Dario shared. They talked about how the immigration experience is a spectrum and how to become advocates for our students.

Consider including campus resources, like the Dream Center in course syllabi. Put wording in syllabus about the fact that we'll be reading and talking about a difficult topic.

Dario recommends being careful about assigning reflection pieces. If you do, consider NOT doing this as a canvas discussion, so as to maintain students’ privacy. Faculty should create norms and guidelines for how to discuss difficult topics in the classroom. Differences of opinion are fine, but how do you deal with it when it's about a person's ability to exist in this country.

Celia began the discussion with this quote from Bishop Romero: “There are many things that can only be seen through eyes that have cried” Bishop Romero (recently declared a Saint by the Pope).

She also shared lyrics from the song "Canción para los refugiados" (Song for refugees): "It is night and very cold. Who will pick up my pain?"

Celia asked the group to consider what does author of The Far Away Brothers want? To lead to a complex understanding of why immigrants leave their country. What are the struggles immigrants face while getting beef while settling in a foreign land. How do the wounds of war affect immigrants?

Celia Spoke about transnationalism and how it’s a part of the culture, how migrants have to cross multiple borders to get to the US. It’s about how they have a life in multiple places, in which they might send home remittances while simultaneously paying for life in the US.

Question: What is America? Who is American? Central Americans? South Americans? It's one giant land mass. There are political borders. But historically there was mass migration throughout the landmass. Migrants are a vulnerable population. The immigration system doesn't let someone be a migrant, moving back and forth between countries. To be undocumented means to be persecuted.

Question: Why is it important to consider different perspectives of migrants?

Exercise for students. Ask students if they are you for or against immigration? And the ask them to write about the opposite of their actual opinion. It may help students learn more about different perspectives other than their own.

Question: How does non-fiction make you feel? Different from fiction? How does the fact that this book is non-fiction help create your perspective on the topic of immigration? Does it help you have a sense of what it would be like to be in the shoes of the twins or the parents?

Question: To what extent does this book create sympathy? What does it say about transnationalism? How does it shape ideas about different groups of people? (class, documented vs. undocumented people).

Isabelle led the group in a discussion about different themes from the book including innocence lost, chance / luck, immigration system, mental health, trauma, education, the US responsibility for the current situation in El Salvador. The group discussed how they might have handled being in the same situation as the Flores twins. Many said that it is impossible to know how you would react until you're in the situation.
The group discussed the structure of book and how it weaves statistics and information about immigration in general between twins' story. Nobody's story is representative of everyone. This allows the reader to place their story in context.
Isabelle shared the following discussion questions.

The Far Away Brothers – Book Discussion

This book tells us the story of two brothers – twins – who leave their small town in El Salvador to escape gang violence that has been steadily encroaching in their part of the country. As we learn of the brothers’ journey to Oakland, CA we are given some understanding of the process of pursuing legal status – the complicated/convoluted steps that one must take – and how much more confusing it can be for an individual not well-versed in language of the country they’re trying to gain status in. We also learn about their personal experiences during their journey and how it has affected them and the subsequent decisions they make after arriving to the U.S.

“The United States is still young and is ever reiterating itself as demanded by its people, both those who have lived here for a long time and those who have just arrived. Immigrants have always shaped our country’s future. Yet our country has not always done well in welcoming our newest immigrants or integrating them into society; this is particularly the case for newly arrived young men. Once it was young Irish and Italian men who, excluded from parts of the workforce and stereotyped as undeserving thugs, sought belonging, purpose, and livelihood in the tenements and organized crime rings of society’s margins…..”

Marvin began this discussion session by sharing semita, a delicious Salvadoran pastry, with the group. He then shared some of his own personal family history, including when his own family fled El Salvador in at the beginning of its civil war. Marvin described The Far Away Brothers as powerful, personal, and at times difficult to read, more so because of his family's experiences.

The group discussed how they personally related to the book, and how we might help our students relate to it. How can they identify with this story and the brothers' experiences. He spoke about how all families, unless they are Native American, have an immigrant story, and that's something most of our students should be able to relate to.

Reading this particular book might make some students uncomfortable. What is our responsibility in guiding these conversations? The group discussed the challenges of asking for and receiving help, something the Flores twins struggled with as well. The group also discussed work ethic. For example, the Flores twins saw their parents' work ethics; they saw them work physically to support their families. Our students see that too, and have learned that kind of work ethic – in college they need to learn how to apply that same work ethic to their education.

We must allow students the space to process the content from the book. Consider inviting someone from University Counseling Services to come and talk to your students.

Marvin shared these discussion questions about the book:

Amanda spoke to English 600A, to prospective TAs, who might consider teaching The Far Away Brothers, when they teach their own courses. She shared campus resources that can be be useful for the subject matter, as well as different types of assignments that would work with the book. 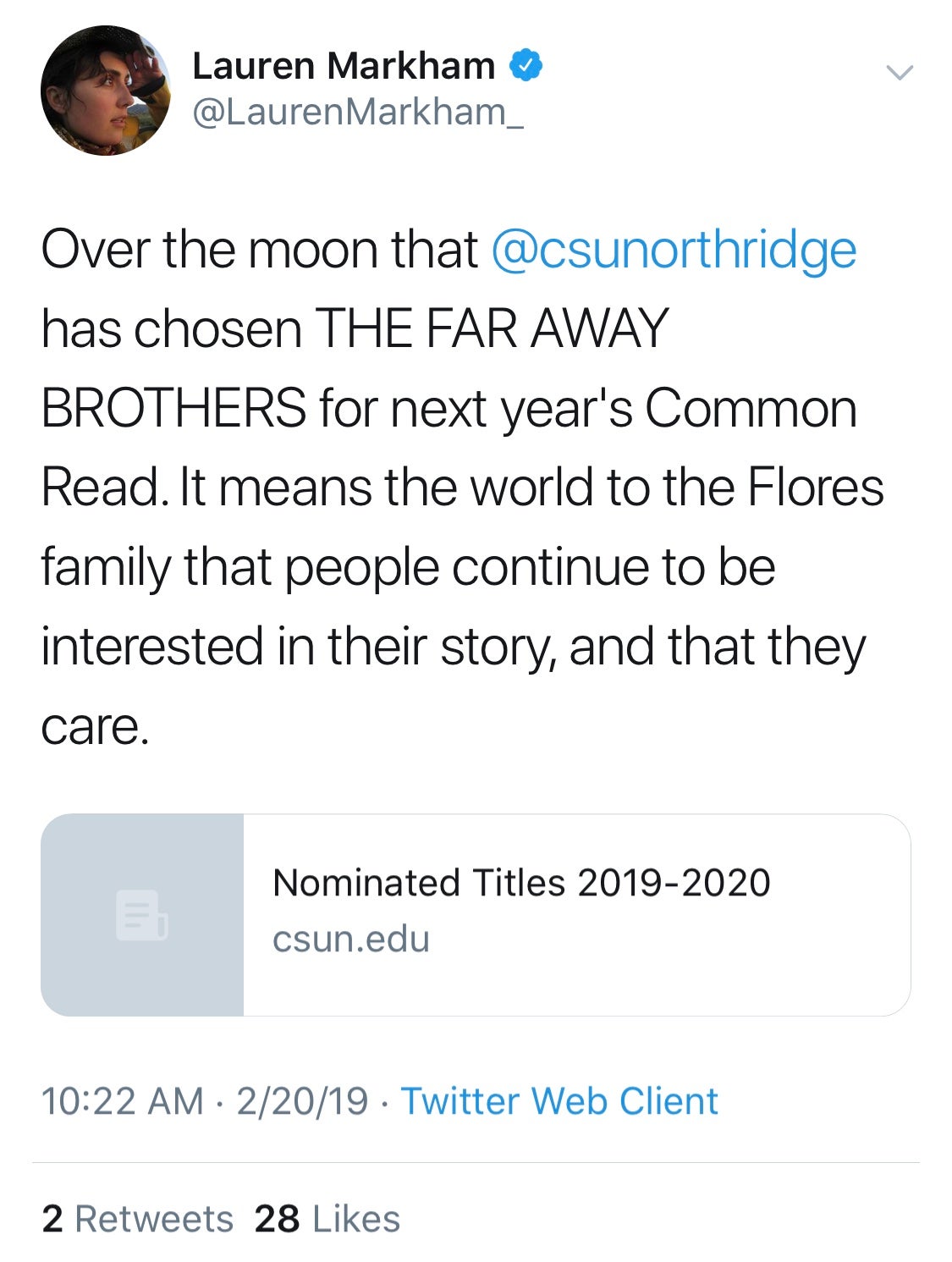 Looks like author Lauren Markham is just as excited as we are about The Far Away Brothers being our next Common Read!

Who chose THE FAR AWAY BROTHERS?

The Far Away Brothers was chosen by this year's members of the Freshman Common Reading Selection Committee. The committee is open to all interested members of the CSUN community: students, faculty, staff, administrators, and alumni. If you'd like to join us next year, read about the Nomination Process and Selection Criteria and then email Susanna Eng-Ziskin, , to indicate your interest.

Names preceded by an asterisk (*) are CSUN students.

What is The Far Away Brothers about?

"The deeply reported story of identical twin brothers who escape El Salvador’s violence to build new lives in California—fighting to survive, to stay, and to belong.

Growing up in rural El Salvador in the wake of the civil war, the United States was a distant fantasy to identical twins Ernesto and Raul Flores—until, at age seventeen, a deadly threat from the region’s brutal gangs forces them to flee the only home they’ve ever known. In this urgent chronicle of contemporary immigration, journalist Lauren Markham follows the Flores twins as they make their way across the Rio Grande and the Texas desert, into the hands of immigration authorities, and from there to their estranged older brother in Oakland, CA. Soon these unaccompanied minors are navigating school in a new language, working to pay down their mounting coyote debt, and facing their day in immigration court, while also encountering the triumphs and pitfalls of teenage life with only each other for support. With intimate access and breathtaking range, Markham offers an unforgettable testament to the migrant experience." (Description borrowed from Penguin Random House)