An Alphabet of Eras That Define 2021: From the KKK, to Malcolm X, to LGBTQ, to CSUN – Barry Dank’s Story 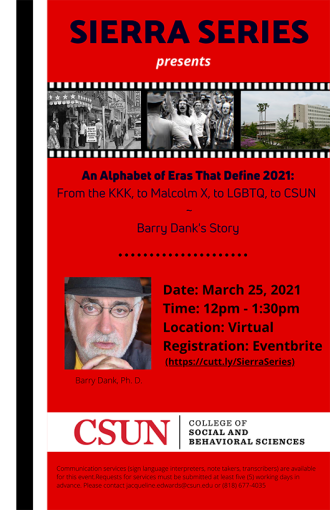 Join us for an interactive conversation with Dr. Barry Dank, retired professor of sociology, as he shares a retrospective of his life growing up Jewish in the segregated South to meeting Malcolm X, to being the first professor to offer classes on human sexuality, to his connections to CSUN and his views on the contemporary American landscape.

Barry M. Dank spent his early years in the rural South in what he describes as an ultra-conservative and racist Jewish family. (A Jewish uncle was an "honorary" member of the KKK.) Distancing himself physically and intellectually from his upbringing, Barry pursued higher education. His travels led to his meeting Malcolm X. Barry ultimately received his doctorate in sociology and soon after taught the first undergraduate course on homosexuality as well as the first undergraduate course on the Holocaust at Cal State Long Beach, where he is a professor emeritus. Barry shares, "My allegiance to truth seeking led me to CSUN." CSUN is where he became involved with multiple forums and established decades long friendships.

About the Sierra Series

The Sierra Series aims to bring ideas, stories, and lives together in order to decrease the distance between people, communities, and the academy. We aim to illuminate, discuss, and move toward positive social change. 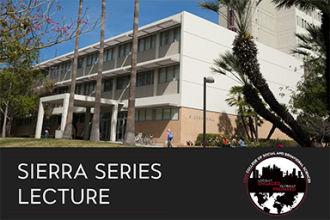 Titled the Sierra Series after Sierra Hall that is one of the original classroom buildings on the campus of CSUN. Built in 1964, Sierra Hall has been the site where nearly everyone on campus has had a class. It has been a place of student demonstration, recreation, and of course study. Even after the Northridge Earthquake of 1994 Sierra Hall still stood – a monument of higher learning. We name our speaker series the Sierra Series as a monument to continued higher learning.

Communication services (sign language interpreters) are available for this event. Requests for services must be submitted at least five (5) working days in advance. Please contact Jacqueline Edwards via email at jacqueline.edwards@csun.edu or call 818-677-4035 to arrange for accommodations.

Quick Overview: The College of Social and Behavioral Sciences intends to record this event. If your camera is turned on, your likeness may be recorded. If your microphone is turned on, your voice may be recorded. The statement below gives us permission to post the recording of this event on our website and/or social media without notifying you or paying you. If you do not want your image or voice to be used by us, please turn your camera and microphone off before joining the event.

When you participate a California State University, College of Social and Behavioral Sciences (CSUN-CSBS) event, you will be participating in an event where video and audio recording may occur.

By participating in this CSUN-CSBS event, you grant permission to CSUN-CSBS to use your name, voice, and likeness solely as it appears in the recording, “The Alphabet of Eras That Define 2021: From the KKK, to Malcolm X, to LGBTQ, to CSUN – Barry Dank’s Story” Zoom event in its entirety, (the “visual/audio content”).

You also agree that the visual/audio content may be used in any electronic or other media as selected by CSUN-CSBS at its sole discretion without notifying you.

You further agree that the visual/audio content may be used by CSUN-CSBS for any purpose, including but not limited to educational, marketing, public relations, websites, social media, publications, promotions, broadcasts, advertisements, and posters but, in any event, solely for in context university uses. you waive any right to inspect or approve the finished visual/audio content or any printed or electronic matter that may be used with them.

You further acknowledge that you have voluntarily agreed to take and/or provide the visual/audio content to the CSUN-CSBS without the promise of compensation or remuneration in any form whatsoever, and you waive any claim for compensation or remuneration of any kind for CSUN-CSBS’s use or publication of the visual/audio content.

You have been fully informed of your consent, waiver of liability, and release before participating in the CSUN-CSBS event.