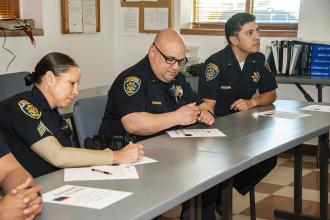 “Start by Believing.” They are three simple words, but can make the difference for a survivor of sexual assault when he or she comes forward to report the attack.

They are words that Katherine Lorenz, an assistant professor of criminology and justice studies at California State University, Northridge, hopes to see spread across not just CSUN, but the rest of the state, as part of an effort to end a cycle of silence and a culture of disbelief when it comes to sexual assault.

“Most sexual assault survivors don’t report the incident to the police,” Lorenz said. “Many survivors are reluctant to tell anyone they were sexually assaulted out of fear that no one will believe them, or that they will be stigmatized or blamed for what happened. If we are truly going to end this kind of violence, then we need to change that.

CSUN’s Department of Police Services has signed on to “Start by Believing” campaign, which originated with the nonprofit End Violence Against Women International.

CSUN Police Chief Gregory Murphy said signing the pledge seemed like an obvious move to him and his staff.

Read the rest of the article at CSUN Today!