The Department of Anthropology is interested in hearing updates from alumni.  If you graduated from our undergraduate or graduate programs, please share with us your news. Please send a paragraph and a photograph to Suzanne Scheld:  Suzanne.scheld@csun.edu. 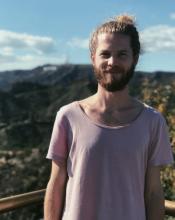 Jakob Askjer is currently studying social anthropology in the Master's of Philosophy program at Cambridge University in the U.K. The focus of his research is on religion and religious experiences in the context of the Middle East and South East Asia.

Eryn Talevich has gone on to undertake doctoral studies in socio-cultural anthropology at the University of Michigan. The focus of her research is on textiles and dress in Europe and North America. 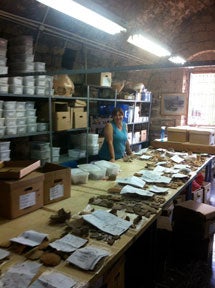 Sandra Mermelsteinreceived her Masters in Anthropology with an emphasis in Archaeology. Sandy is now applying to combined Masters/Ph.D programs in Archaeology. After completing her MA thesis "Production and Exchange of Hellenistic Moldmade bowls at Tel Dor", Sandy is now working on publishing a catalogue of the moldmade bowls for the excavation in Israel. The catalogue is a continuation of the research she began while working on her thesis. While at CSUN, she received a National Science Foundation (NSF) mini grant to have her pottery undergo Neutron Activation Analysis (NAA) in order to help determine the origin of the bowls and she continues to work on this project as well. 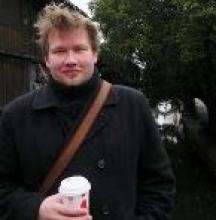 Don Duprez recently defended his PhD dissertation in Social Anthropology at the University of Edinburgh, and holds an MA in Anthropology from California State University, Northridge, and a BA in Anthropology and Archaeology from Georgia State University. His current research explores reproduction, religious hybridization and efficacy among Hmong diaspora in the United States. Duprez has conducted research among Hmong American communities, Japanese transnationals, Chinese Americans, and Chinese populations, which have included Han communities and the ethnic minority groups of the Dai and Miao peoples. Duprez has held teaching positions at Wuhan University of Science and Technology in China; and the University of Edinburgh. He is currently based in Denver, Colorado.

Adam Martin has pursued a career in International Development. He has worked with urban refugees and asylum seekers and currently works as the Victim Support Assistant for the Australia-Asia Program to Combat Trafficking in Persons based at their regional headquarters in Bangkok, Thailand. As a part of the Victim Support Team, he provides technical advice, training and knowledge products to government counterparts and nonprofit partners in the region to assist them in their fight against human trafficking. Adam credits his background in Anthropology as a factor in being successful working on a development project covering a politically and culturally diverse region of seven countries in Southeast Asia. He notes, "In practical terms, the knowledge and skills that I gained from my Anthropology education have been very useful in adapting the approaches and methods of project implementation in target countries. This background has given me the ability to develop strategies that better fit the practices of the target population."

Kelly Moran served in the US Peace Corps for 27 months after obtaining her BA from CSUN. This time spent living as an “other” persuaded Kelly to continue studying anthropology, and she earned an MA in Applied Anthropology from the University of North Texas in 2007. Kelly has spent the last five years working for VHA, a national healthcare alliance based in Irving, Texas. Although she works healthcare, Kelly considers herself more of an organizational/business anthropologist then a medical anthropologist and spends her time studying how healthcare workers provide safe and compassionate care within a highly structured organizational environment. Read her recent paper, "Health Care as Social Practice."