The 1960s will always be remembered as the Decade of Discord and Disruption in America. The discord could be found in the schism that existed in the nation, one marked by a racial Maginot Line separating black from white. Not until the Civil Rights Movement found its stride through the Montgomery Bus Boycott which, launched Dr. Martin Luther King’s career, would the decades-old practice of second-class citizenship reinforced by a de facto and racist “separate and certainly not equal” culture be challenged. Once that happened, the walls began to slowly tumble down as African Americans no longer consented to “suffer gladly” the injustices of racism that were perpetuated by the teaching taking place across the nation, from grammar school through college. Though the U.S. Supreme Court found in the 1952 Brown v. Board of Education, Topeka, Kansas, that the education system was separate, was not equal, and a flagrant civil rights violation of black people, it would take another decade before the sleeping giant that was Black America, finally rose to say “No more!”

The discontent was seen in the streets as 274 cities between 1964-1968 suffered through urban upheavals that resulted in hundreds of lives lost, thousands of people injured and arrested, and billions of dollars in property damage. The upheavals could be found across the nation – in New Orleans, in Cleveland’s Hough community, in Jacksonville, Florida, Harlem, Detroit, Chicago, Oakland, San Francisco, San Diego and, certainly, Watts with its now-infamous “Charcoal Alley No. 1. 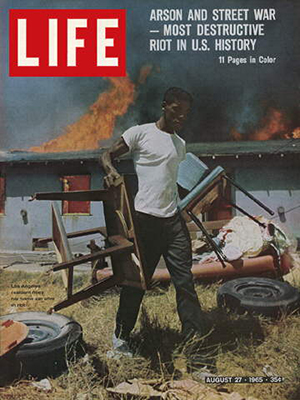 These pictures dominated cover pages of nation’s newsmagazines as an illustration for the discontent cities.

Black America found its two major leaders– Martin Luther King and Malcolm X – assassinated within three years of one another. This only helped fuel the fires of social discontent. The discord one saw in the cities could not be contained there. For what the world was witnessing proved to be far more profound than mere anger as numerous commissions, established to investigate the causes of the violence, found that many existed, based on social neglect. America as a whole was undergoing a profound social change, and in no way would this be reflected so deeply as in its public and private schools.

Parents and Students Speak Out

Black parents and Black students alike expressed their frustration and rage over the miseducation taking place. This was most evident at the college and university level where Black collegians began bonding together to form Black Student Unions to articulate their concerns. This movement was openly displayed on the covers of TIME, NEWSWEEK and other national publications, as Black colleges took control on campuses from Columbia University, San Francisco State University, Stanford, Harvard, the University of Michigan, and then-San Fernando Valley State College, now-turned California State University Northridge.  And this was not only to be found in the colleges and universities. The discontent manifested in the high schools of the nation as well, with the Berkeley, California Unified School District giving birth to the Black Studies Department at Berkeley High, the only high school in the country with a Black Studies Department.

There was no mistaking the passion for positive social change on the campuses, as black students led the charge to not only be taught about Black culture, but also for inclusion into the general education requirement, whereby every student, regardless of ethnic background, must take before matriculation.

The Presidents of the United States could not have anticipated the demands made by Black America for an equal education, and an assurance that the schools in their neighborhoods were brought up to standard, with an insistence on providing teachers and administrators who cared.

The Recession Changed the Paradigm 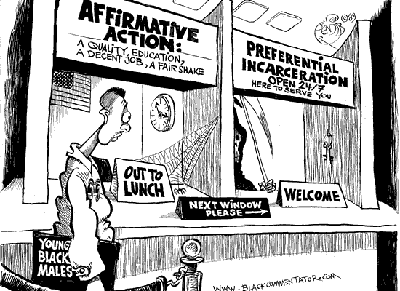 Along with massive layoffs and high unemployment rates, the Recession saw incarceration rates for black men and women alike skyrocket to levels never before seen.

Then came the Recession with its shutdown of cities, massive layoffs, home foreclosures that adversely affected the country and a plunging economy,  underlined by double-digit unemployment rates in Black America, which set the stage for history to be made in the election of our first Black President, whose first and foremost challenge was to lift the nation out of its dire economic straits. It became imminently clear that the unemployment lines reflected as many college graduates as it did those with little to no college education. This finding led to a questioning of the values of attending college and majoring in specific disciplines and subjects as never before.

For White America, these questions translated as: Well, can you get a job after you graduate? What good is it going to do to take classes in poetry and art instead of where the “real” jobs are in science, business and engineering? For Black America these questions led black parents and grandparents to implore their first-generation-college sons, daughters and grandkids “not to take any of those Black classes. Studying about Martin Luther King is not going to get you hired! All they talk about is slavery in those classes anyway! What are you going to get out of majoring in Black Studies? You need to major in something where you can get a job!”

With that as a backdrop for where the nation, especially Black America, and in particular the discipline now called Africana Studies stands at this moment, there is an answer to the questions being asked in so many corners: Why Africana Studies? What is it about? What can a person do or how might someone benefit from taking courses or majoring in the discipline? And finally, the most important, how can it make a difference in today’s world and the future of our nation?

For those who ask “Why Africana Studies?” the answer begins with how the discipline presents in an orderly, systematic, unbiased manner a description of the history and culture of those peoples of African descent in a way that obliterates racist stereotypes, as well as the distortion of history. The Department of Africana Studies at CSU Northridge offers a vision that will assuage Dr. King’s concern that we not be caught still in horse-and-buggy mode, while the world has moved fast-forward in what is now the Information Age.

The department is internationally recognized for inspired teachers, able nurturers, committed mentors, and pioneering researchers. We function as a vanguard in preparing African American students, in particular, for a holistic education that aims to be both academically excellent and culturally sensitive. In addition, the Department of Africana Studies envisions a world where all people are spiritually, physically, and psychologically liberated; a world where all peoples are accorded respect and equal opportunity based upon their abilities and selfless pursuit of knowledge and truth; a world where all people are free to seek and create their own destiny.

Africana Studies will also advance the reality of African American control of their own resources and institutions in promoting self-awareness, self-appreciation, self-determination and empowerment to uplift the African Diaspora and, ultimately, the people of the world.

In doing this, we will have rediscovered a past, a history of achievement and contribution that people of African descent, indeed the world, can and will be proud of. At the same time, we will have helped to open the gates to that Promised Land Martin Luther King, Jr. and so many others sought, fought and ultimately sacrificed their lives for.