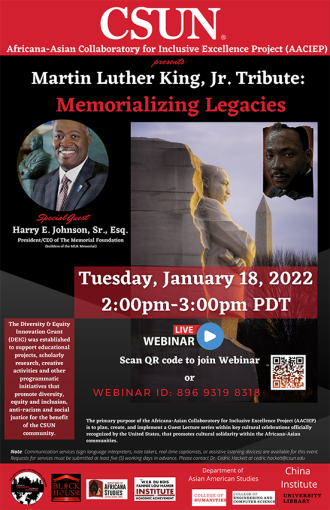 Please join the College of Social and Behavioral Sciences, the Dubois-Hamer Institute for Academic Achievement, the Black House and the Department of Africana Studies for a Martin Luther King, Jr. Tribute: Memorializing Legacies with guest speaker, President and CEO of The Memorial Foundation, Inc., Harry E. Johnson, Sr., Esq. Johnson's lecture will cover the importance of having the MLK Memorial on the National Mall in Washington DC, and the continuing work of The Memorial Foundation's work to enhance Dr. King's work and legacy.

Harry E. Johnson, Sr. heads The Memorial Foundation; this foundation will continue to promote awareness of the Martin Luther King, Jr. Memorial and its tenets of Democracy, Justice, Hope and Love as well as to support the general upkeep of the Memorial in future years. Johnson led the Washington, D.C. Martin Luther King Memorial Foundation as President and CEO from 2002 until 2013. The President of the United States and the U.S. Congress charged the MLK Foundation with erecting a memorial on the National Mall in Washington, D.C. to honor the life and legacy of Dr. Martin Luther King, Jr. Under Johnson’s leadership, the MLK Memorial Foundation raised $127 million to complete the memorial. The memorial dedication was held on October 16, 2011, with the President, Vice President, members of the cabinet, congressional members, and others in attendance. Johnson is a career lawyer, entrepreneur, and public servant. From 2001 to 2004, he served as National President of Alpha Phi Alpha Fraternity, Incorporated, the fraternity to which Dr. King belonged. Johnson has served as City Attorney for Kendelton, Texas, taught at Texas Southern University in the Thurgood Marshall School of Law and School of Public Affairs. Johnson has dedicated his time to community groups and issues, such as voter registration, blood donations, HIV/AIDS, Boy Scouts of America, and Big Brothers. He serves on the AARP Foundation Board, The National Urban League Board and The March of Dimes Board. Johnson received his Doctor of Jurisprudence from Texas Southern University where he was a member of the Thurgood Marshall Student Bar Association. He completed Post Baccalaureate work in Public Administration at St. Louis University and received his Bachelor of Arts from Xavier University of Louisiana. Johnson has received a number of recognitions for his public service and was named in Ebony Magazine’s “100 Most Influential Black Americans” 2001 through 2004.