The Intersection of the Blaxploitation Film Genre and Afrofuturism

Christopher St. John, sometimes credited as Chris St. John, is an American film and television actor. He is also a film producer, film director and screenwriter and played a minor role in the television series Remington Steele. A member of the Actors Studio starting in the mid-1960s, St. John is best known for playing the role of Ben Buford in the 1971 blaxploitation film Shaft. Between 1968 and 1988, he appeared in eight film and television productions. In addition to appearing as George Lattimer in Top of The Heap (1972), St. John wrote, directed, and produced the film. It was entered into the 22nd Berlin International Film Festival and was nominated for the Golden Bear, the festival's biggest prize, Richard Brody in The New Yorker described the film as a "crucial work of Afrofuturism." Christopher's Top of The Heap movie was recently featured at The Brooklyn Academy of Music and The LA Times.

Leonard Clifton started as a print model, which led him to acting. His first Hollywood job was in Tupac Shakur's "Temptations" music video and his first role was in Steven Spielberg's Amistad. He went on to have roles in several other films like the cult classic Bring It On, television productions, and international commercials. Leonard loves writing, supporting his favorite charities, traveling the world, and is always seeking new adventures. Leonard was the first author to have a Barnes & Noble book signing for Black History month at The Grove in Los Angeles, and he has given a lecture about his book and how it relates to Afrofuturism at California State University, Northridge. 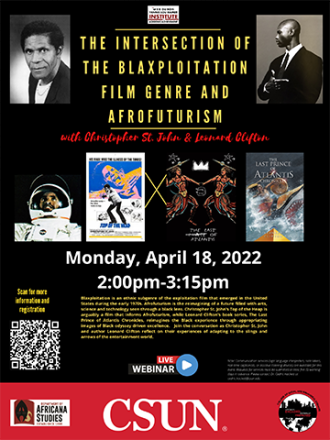 Please join the CSUN College of Social & Behavioral Sciences, the Dubois-Hamer Institute for Academic Achievement and the Africana Studies department for a discussion about The Intersection of the Blaxploitation Film Genre and Afrofuturism with guests, actor-director, Christopher St. John and actor-writer, Leonard Clifton (The Last Prince of Atlantis Chronicles).

Blaxploitation is an ethnic subgenre of the exploitation film that emerged in the United States during the early 1970s. Afrofuturism is the reimagining of a future filled with arts, science and technology seen through a black lens. Christopher St. John's Top of the Heap is arguably a film that informs Afrofuturism, while Leonard Clifton's book series, The Last Prince of Atlantis Chronicles, reimagines the Black experience through appropriating images of Black odyssey driven excellence. Join the conversation as Christopher St. John and author Leonard Clifton reflect on their experiences of adapting to the slings and arrows of the entertainment world.