Greetings from the Chair 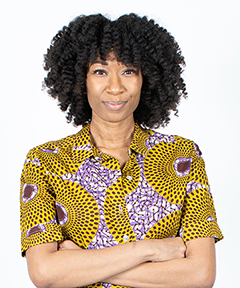 Habari Gani! It is an honor to serve as Chair of one of the oldest and largest Black Studies departments in the nation. We are cultivating an intellectual environment grounded in the histories, cultures, and worldview of African people that seeks to activate the strengths of our students and their communities.

Through our degree programs, curriculum and programming, we aim to raise students' and scholars' critical race consciousness and cultural literacy to challenge systemic racism, anti-Blackness and inequities. We also offer a wealth of community engagement and empowerment opportunities.

Consider taking a course with us. Also, explore the benefits of majoring or minoring in Africana Studies. Our Majors gain:

We remain committed to the wellbeing of our students, their families and communities. Establishing and maintaining partnerships with local, national and international communities are vital to our success.

As we begin the start of a new semester, we strive to advance academic excellence, liberatory scholarship, and community empowerment.

Welcome to the Africana Studies Department,

Africana Studies Statement of Affirmation of the Humanity and Dignity of African and Indigenous Peoples and Call to Action to Address the Racists Statements by L.A. City Council President and Others

The Africana Studies Department at California State University, Northridge stand in firm commitment to respecting, honoring and celebrating the dignity and humanity of African peoples and Indigenous peoples globally.

The work of Black communities, activist, educators, and anti-racist politicians have contributed to the dismantling of anti-Black white-supremacist racist ideologies, practices and public policies. Systematic assaults against African peoples, cultures, and civilizations are longstanding and continue to reveal the embedded anti-Black and racists ideologies and policies that plague our nation and the city of Los Angeles. We continue to demand that public officials, representatives and elected state and local politicians demonstrate their respect, through word and action, for the human dignity and rights of Black, Indigenous, and people of color. Elected public officials, including the L.A. City Council, must uphold these responsibilities.

Collectively, Black and Latinx/a/o communities and Ethnic Studies Departments have united to support the Black Lives Matter Movement and continue to stand in solidarity on issues of advocating for the human and civil rights of our communities.

As an academic discipline and as scholar-activists trained and grounded in investigating and dismantling systematic racism, we recognize the importance of structural policy changes to address racism. We challenge the City of Los Angeles to mandate anti-racism training and annual assessments for all public officials.

Please join the us in Matador Square to kick off Black History Month 2023. Learn more about this event.

We are pleased to welcome, Dr. Jon Paul Higgins for a conversation about body positivity and body neutrality moving through the world as fat, Black and femme, and how they’ve found peace with themselves. Learn more about this event and guest speaker.

Join Pulitzer-Prize winner and The New York Times staff writer, Nikole Hannah-Jones, as she discusses her book, The 1619 Project, and how the legacy of slavery did not end with emancipation. Get more information about this event.

The CSUN Department of Africana Studies is accepting applications for anticipated Part-Time Faculty Openings during the 2023-24 academic year. Learn how to apply.

AFRS Students Tell us about your Accomplishments!

We invite Africana Studies students to take a short survey about your academic and personal accomplishments. 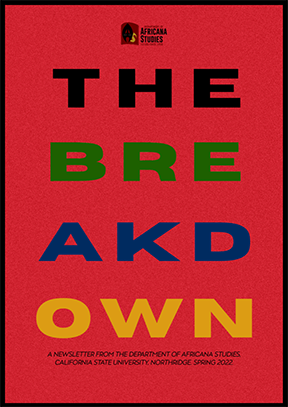 The Africana Studies Department is pleased to announce our 2020 James Bracy Scholarship Recipients.