Do you have any questions about Grading Options for the Spring 2020 semester ? 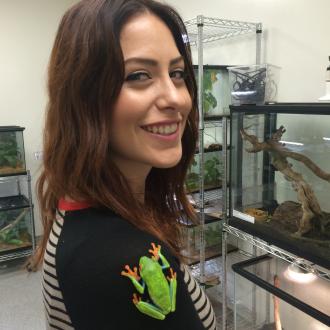 Abstract —The processes that generate variation in nature have captured the attention of evolutionary biologists since the time of Darwin. Many studies examine the evolution of diversification in closely related or hybridizing species to understand the process by which new species evolve. However, more closely related divergent populations can provide a unique insight into how diversity evolves in nature. The Neotropical red-eyed treefrog (Agalychnis callidryas) exhibits substantial geographic variation on a relatively small spatial scale within Costa Rica and Panama, including differences in color pattern, body size, and skin peptide composition. Genetic analyses indicate ongoing gene flow among phenotypically differentiated populations, providing the opportunity to describe the patterns and processes that are integral to lineage divergence before isolation becomes complete. First, we tested the extent of behavioral premating isolation among differentiated populations by quantifying differences in male and female courtship signals. Our results show that both male advertisement calls and female behavior vary among populations, and that divergence in male signals is coupled with female preference for the local male phenotype. The interplay between male courtship and female responses may facilitate the evolution of local variants in courtship style, thus accelerating premating isolation via assortative mating. Second, we conducted a study of genomic and phenotypic variation across red-eyed treefrog populations, including a central contact zone. Our results indicate the creation of a distinct hybrid population at the contact zone. Association between geographic and genetic distance coupled with disassociation of genetic and phenotypic divergence indicate strong localized selection with high levels of genetic exchange. This study is one of few to characterize genome-wide divergence in a highly admixed intraspecific lineage, allowing us to describe the genomic architecture of diversification and infer whether evolutionary processes are driving and/or constraining divergence. We contribute to a growing body of knowledge on divergence with genetic exchange: gene flow is a dynamic evolutionary process that can simultaneously act as a creative, diversifying, and homogenizing force.

Information and guidance on a wide variety of subjects related to success in the Biology major, and your career plans.

Click here for more information and to schedule an appointment

We may be able to provide one online!

New publication from our Department ! 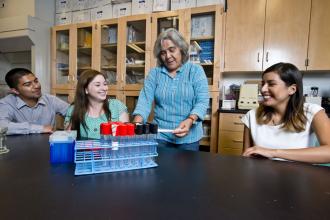 The MARC & RISE programs at CSUN are currently accepting applications!