About 200 published papers, abstracts/presentations and books with about 700 student co-authors resulted from our work. Our success with student research accomplishments was recognized in 2009 by a U.S. Presidential Award from the White House and National Science Foundation.

During the Brooklyn-born professor's 41 years at CSUN, he has communicated his joy in life and learning to battalions of students who have carried it into research, medicine, teaching, forensics technology, pharmacology, dentistry and many other fields of science.

Oppenheimer has co-authored with more than 700 students—most of them undergrads—about 200 peer-reviewed papers, abstracts and presentations. He has mentored some 200 long-term student researchers, many of them women and underrepresented ethnic minorities. In any given semester, from 50 to more than 100 students are at work in his lab, treated to his famously corny jokes and a greeting, "How's it going, Professor?" which signifies his faith in their academic futures. They also are treated to the elusive opportunity to do research.

Fresh out of UCLA with A's all over her transcript, a young grad student recently gravitated to Oppenheimer's lab. "She'd been interested in a Ph.D. program at UCLA but didn't get in. The reason? No research experience," he said. "She did a beautiful piece of work here, published it, and is now getting honors in Yale's Ph.D. program. What that says—and this is a typical situation—is that a good research experience plays a major role in getting into an advanced program."

Not all, however, come to Oppenheimer as academic heavy-hitters. "I like to give every student who is interested the chance to do some research," he said. "I've seen too many cases where the GPA may not be that good; the kid may look a little disheveled. Some of those turn out to be the best."

His method for mentoring and managing hundreds of student researchers? "First of all, my office is in the lab. In fact, I don't have an office. I'm right in the middle; no glass, no wall. I'm sitting here every day; I can see what's going on." He checks students' lab notebooks daily. "It's a very well-defined and organized operation with lots of controls." He appoints a team of student leaders to help train the new students and set up the experiments, a practice Oppenheimer considers key to the system's success.

"I couldn't do it alone," said Oppenheimer, a fellow of the American Association for the Advancement of Science, who for years has partnered with committed CSUN faculty peers on student research work.

The payoff is evident. One product of Oppenheimer's mentorship, a minority scholar who earned a Ph.D. in cell developmental biology from Harvard, is now a senior scientist at Washington University. "Dr. Oppenheimer," said Claudia Garcia, "continues to be a great mentor to me and to many other students interested in science."

In addition to 24 local, statewide and national awards and honors, Oppenheimer received a U.S. Presidential Award for Mentoring at the White House, in January 2010. He was elected Fellow of the American Association for the Advancement of Science (AAAS) for "distinguished" research on cell surface carbohydrates in morphogenesis and malignancy. 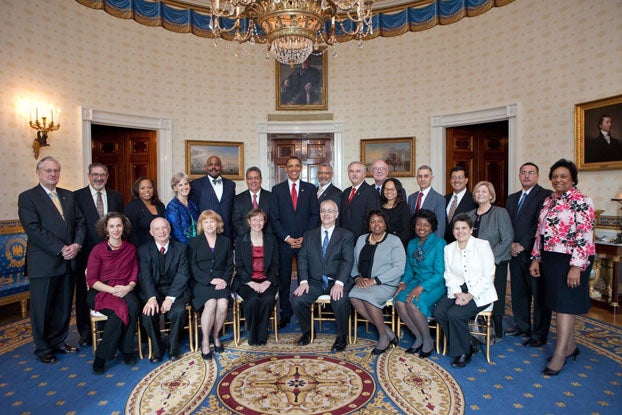 Mechanisms of adhesive interactions in development and cancer; role of surface sugars

RECENT CSUN STUDENT CO-AUTHORED WORK The following are 2013-2015 papers from Oppenheimer lab and explanations of the contributions they make to science.

ABOUT THE SINGH ET AL. (2014)., SMITH AND OPPENHEIMER (2013), AND LIANG ET AL(2015). Singh et al. (2014) for the first time used an elegant new assay developed in the Oppenheimer lab that directly discovered a role of polyglucans in a cellular adhesive interaction of interest to biologists for over a century, adhesion of the archenteron tip to the blastocoel roof in the NIH model sea urchin embryo system. What is found in sea urchins is often found in humans. Liang et al. (2015) and Smith and Oppenheimer (2013) found for the first time in animal systems using both enzyme and sugars that L-rhamnose is involved in sea urchin embryo cellular interactions. This sugar has not previously been definitively shown to be involved in cellular interactions in ANY animal system. This is a big first.

K-!2 PUBLISHED WORK All 19 years of the award-winning K-12 student abstracts science journal can be downloaded free of charge by anyone in the world at: http://scholarworks.csun.edu/handle/10211.3/125029. This contribution to science education as well as the award-winning CSUN student research programs and and publications helped garner a U.S. Presidential Award and about 26 local, statewide and National Awards and honors, including election as Fellow of the American Association for the Advancement of Science (AAAS). A Fellow of the AAAS is defined as "a Member whose efforts on behalf of the advancement of science or its applications are scientifically or socially distinguished."

Citations:  Over 300 citations of P.I.’s papers have appeared.

Books:  14 book editions – textbooks on embryonic development and cancer.  Some:

Oppenheimer, S.B., Cellular Basis of Cancer Metastasis: A Review of Fundamentals and New Advances, Acta Histochemica, 108:327-334 (2007). This paper garnered the most downloads of all papers in this Elsevier journal, August 06-March 07 (813 downloads).

About $7 million in research and training grants awarded by the National Institutes of Health, National Science Foundation and local and statewide granting agencies.