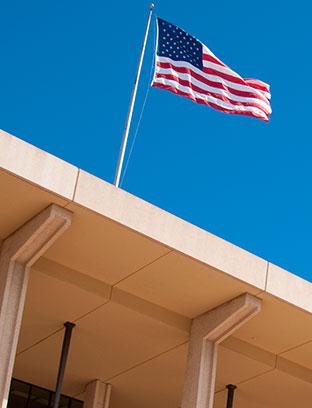 California State University, Northridge's institutional U.S. flag flies atop the Oviatt Library. As noted on CSUN's Pride and Traditions website, the flag was re-sited there in the aftermath of the 1994 Northridge Earthquake. U.S. flags are also maintained by Student Housing, the University Student Union, and Police Services at their respective facilities. CSUN also flies its institutional flag at the campus's transit station on Vincennes Street.

The Chancellor of the 23-campus California State University has delegated decisions related to the U.S. flag on the individual campuses to the presidents of each institution. As a public institution, CSUN generally bases decisions to lower the U.S. flag at the Oviatt Library on proclamations, executive orders and directives sent to federal and/or state agencies by either the President of the United States or the Governor of California. Decisions related to the CSUN institutional flag are generally based on directives from the Chancellor's Office.

Whenever the university president issues a directive to lower the flag to half staff, a notice is posted on the front page of the university website.

Below is a list of pre-established dates on which the U.S. flag is customarily flown at half staff: