Kaila Lavin was born in New Mexico and raised in Arizona. She began working at a recreation facility in high school and loved the fun environment it created. From there, she attended the University of Arizona and began working at the Student Recreation Center on campus. Over the next four years, she advanced through several positions within the department and decided that the recreation industry was the career path for her.

After graduating from the University of Arizona with a degree in Psychology, Kaila moved to California. She attended CSUN and received her graduate degree in Tourism, Hospitality, and Recreation Management (RTM) while serving as a graduate assistant for the new SRC during the construction phase. Kaila continued working her way up in the SRC to her current role as Interim Director. 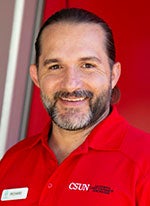 Richard Cardona was born in New Orleans, Louisiana and was raised in Colombia, South America. A former professional dancer, teacher and choreographer, Richard danced on Broadway and toured in Europe and the United States. He danced in various ballet and modern dance companies and has performed in themes parks abroad and in Orlando, Florida. Richard attended Saint Mary’s College of California Liberal Arts — Performing Arts program.

He discovered a passion for fitness and wellness early on, as did his spiritual journey. In his early teens on a layover while traveling abroad, a monk approached him and gave him a copy of the Bhagavad Gita. He was immediately attracted to the images on the cover, and even more so at the sight of the peaceful and serene monk, with barely any possessions, humbly walking about the airport.

Richard’s leadership skills were honed in during his tenure in the top fitness brand of the United States, Equinox. He was a top tier trainer and was promoted to Fitness Training Manager and a Personal Training Manager both in New York City and Los Angeles, coaching and developing the personal training staff.

Having had the great fortune to study with a third generation Qigong master, a natural therapy healer, an acupressurist, a doctor of kinesiology and biomechanics, and many wonderful yoga, pranayama, and meditation teachers, Richard fuses 25 years of fitness and wellness into his classes and in his role as manager of the Oasis Wellness Center. He holds various holistic certifications and is a 500-hour certified instructor through YogaWorks.

Richard’s mission is to create a safe, nurturing, and welcoming inclusive environment for all to learn, transform, and cultivate wellness.

Register for Classes and Workshops

In response to COVID-19, the Oasis Wellness Center is closed until further notice.