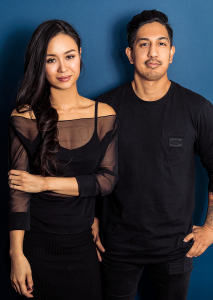 A Flavor of Ice and Fire. Dragon Glace. Dothrocky Road.

“Game of Thrones” fans, meet the “Game of Cones.”

Each unique flavor of ice cream at Wanderlust is conceptualized based on different travel destinations around the globe. Signature flavors such as “Sticky Rice + Mango” and “Passionfruit Cacao,” available year-round, transport the palate to places like Thailand and Brazil, and keep loyal customers coming back for more. However, their seasonal varieties, rotating each month, are what get visitors on the edge of their seat as they discover new ambitious flavors they can only get at Wanderlust.

This time, co-founders Lopez and Borlongan, travel to Westeros and beyond. Taking their “seasonal” flavors in a unique turn, they’ve created eight new flavors for the eighth season of “Game of Thrones,” available from April 1 to May 31.

“We’re big nerds of the show,” Borlongan said. She even went so far as to dig deep into the pages of the George R. R. Martin’s original “A Song of Ice and Fire” novels to trace food excerpts that can serve as inspiration for the new flavors, she said.

In 2017, Wanderlust also had limited-edition flavors for the seventh season of ‘Game of Thrones’ available for a month. This year, taking the success of the previous project, they decided to keep the flavors around for twice as long.

A husband-and-wife duo, Lopez and Borlongan collaborate by using their individual expertise to carry the corporate and creative weights of running an ice cream business. Lopez is the entrepreneur between the two and runs the operations and management side of things. Borlongan, on the other hand, uses her food theory knowledge and mixology experience to conceptualize every flavor Wanderlust offers.

The couple met during college when they were both studying at CSUN, but it wasn’t until years later that the two decided to create Wanderlust. After graduation, Lopez practiced law and Borlongan worked as a bartender.

“It wasn’t really in the cards to start a business together,” Lopez said. “We didn’t plan it.”

The idea to build up an ice cream shop was the result of a vigilant eye in observing how the community ​responds to the food industry.

“We would go to these ice cream places outside the Valley,” Borlongan said. “We saw these people in line for 30 minutes, all for flavors they couldn’t get anywhere else.”

The couple took that thought and carried it through the form of a New Year’s resolution, Borlongan said. Then, in 2015, the first location of Wanderlust Creamery broke ground in Tarzana. ​Atwater Village and Smorgasburg Los Angeles in downtown Los Angeles followed suit. With the construction of their newest location in Venice, Calif., last year, dessert enthusiasts can now enjoy the travel-inspired flavors in four locations.

In just four years, Wanderlust already boasts a large social media presence, with more than 60,000 followers on Instagram. News website INSIDER featured it in a video with more than a million views in 2017, and recently named it among stores with “The Best Ice Cream in Los Angeles,” spreading word about Borlongan’s imaginative flavors far beyond L.A. (Read the Full Story Here.)