About the authors: Richard W. Moore is a professor of management in the CSUN David Nazarian College of Business and Economics. He has worked a consultant on employment and training issues, for the City of Los Angeles, the California Employment Development Department, The World Bank, The Government of Indonesia and other organizations. Kenneth Chapman is a professor of economics in the CSUN Nazarian College, specializing in labor economics. He has worked as a consultant for the California Employment Development Department, the City of Los Angeles and others. The two professors partnered to create the website Cal State Pays (calstatepays.org), which tracks the earnings and employment of over 600,000 CSU students who attended the seven CSU campuses in metropolitan Los Angeles. 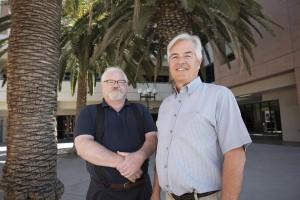 A look at what happened in the Great Recession of 2007-2009 assures us that a CSUN degree will still have value and will be more important than ever, even in this uncertain future.

First, college graduates, on average, will continue to out-earn workers with some college, a high school diploma or less, and this difference will grow over a working life. A college degree represents a big investment in an individual’s marketable skills.

A college degree means a person has not just learned a set of narrow job skills, but has developed the capability to learn new things as the world changes, and has become an effective communicator and mastered a particular field, whether it is history, business or economics.

Employers want people with broad based skills and will pay for them. When graduates are first out of school, the difference in earnings between the college and high school graduate may be small, but over thirty years it will grow wider and wider.

We know this is true because we have studied the earnings and employment of over 600,000 CSU students who attended the seven CSU campuses in metropolitan Los Angeles. You can see all this earnings data clearly displayed at our website, Cal State Pays (calstatepays.org). You can look at any individual major on the seven campuses and see what graduates and dropouts earn.

What you’ll see is that graduates earn a lot more than those who drop out and that this difference increases over time. You will also note that graduates who continue on to obtain advanced degrees earn even more. Cal State Pays also shows you the industries where graduates end up working.

Even graduates who have the misfortune of graduating in difficult times end up better off than those who don’t complete their degree. The graph below is for graduates of the CSUN psychology program, one of the largest programs at the university. It shows that graduates earn 50% more than dropouts, fifteen years after they left campus. Graduates with an advanced degree earn 135% more than dropouts. 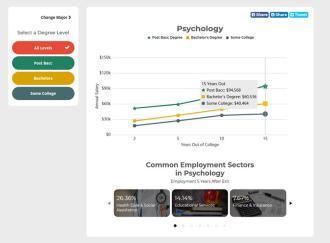 This data includes graduates who graduated during the tech melt down of 2001, and the Great Recession, which officially began in December 2007 and ended in June 2009. We studied over 50 CSUN majors; in nearly every case, the graphs looked similar, and in every case, those with CSUN degrees earned more over time than those without degrees.

As you can see, a bachelor’s degree in psychology can take you a lot of different places. The three most common industries of employment for CSUN psychology graduates are Health care and Social Assistance, Education and Finance.

Our second finding is that when times are tough and unemployment is high, college graduates are much more likely to be employed. That’s good news, because the near future may be tough. Let’s put it in perspective.

Forbes estimates that national unemployment rates are likely to rise to 17% based on new applications for unemployment insurance. In April, the national rate reached 14.7 percent, which is already the worst level since the Great Depression (a high of 24.9% in 1933).

But unemployment rates don’t hit all segments of the population equally.

Even in the strong economy of 2019, the unemployment rate was still 3.7% for high school graduates and a mere 2.1% for college graduates. In short, no matter what happens in the next couple of years, college graduates will weather the storm better than those with less education, as the graph below clearly shows.

Finally, college graduates overall find their work more rewarding and satisfying. A notable Pew Research Center study found that 55% of college graduates described themselves as “very satisfied” with their jobs versus 40% of non-graduates. For workers with a master’s degree or higher, that number reached 69%.

College graduates get a chance to work in a wide range of occupations, where they get to continue learning, work with new ideas and new technology, and have the satisfaction of helping others. In Los Angeles, college graduates are disproportionally in the most dynamic sectors of the economy. You can find them working in healthcare, start-ups in Silicon Beach, helping improve public education, or crunching numbers in the dynamic finance industry.

The next year or two will be a turbulent time in the labor market, as the economy re-emerges from the pandemic. But one thing you can count on: No matter what happens, college graduates will be better prepared than those without a degree.