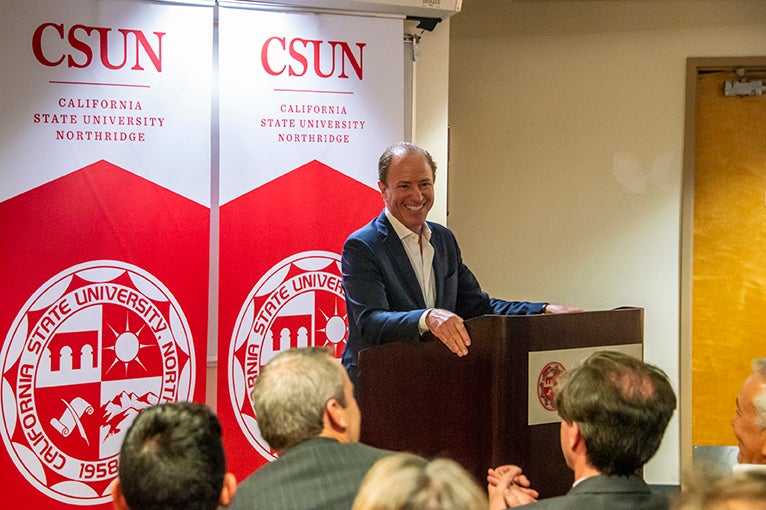 When Milton Berlinski ’78 (Computer Science) first arrived on CSUN’s campus, the difference was palpable: A native of Aruba, he had gone from an island with a population of 60,000 people where he “knew pretty much everyone” to the San Fernando Valley — which, even in the ’70s, boasted a population nearly 12 times greater. He didn’t know a soul.

“I was scared to death,” Berlinski said, “but I learned you can overcome anything.”

That was just one of the lessons the co-founder of Reverence Capital Partners LLC and the former head of strategy and corporate development for Goldman Sachs shared with an audience of students, faculty and staff April 4 at Bookstein Hall, home of the David Nazarian College of Business and Economics. The seminar was sponsored by the CSUN Student Finance Association.

Berlinski spoke about his time at CSUN and his history climbing the corporate ladder in finance and investing. He stressed that the skill sets you have and can develop through education and hard work can put you on the right path to take advantage of opportunities.

“When I initially talked to Goldman Sachs in 1979, they said they were a U.S.-centric firm, and that they weren’t interested in going international,” said Berlinski, who at the time lacked a green card to work in the country. “But Goldman Sachs wanted to build up their financial services division in banking, and it helped my cause to be able to speak six languages and understand international business teamwork from my previous jobs, once the company wanted to become a global firm.”

His time as a CSUN student taught him many valuable lessons.

“I got involved in student entertainment, in building a fraternity, and I built friendships that have lasted a lifetime,” Berlinski said. “The training I got at CSUN taught me how to go from point A to point C, and it allowed me to develop my own thought processes.”