The Nazarian College is proud to welcome Lang Fredrickson and Wayne Stelmar to its Advisory Board. 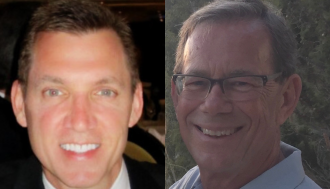 Lang Fredrickson '89 (Marketing & Finance) is the Chief Financial Officer at the American Film Institute (AFI), an education non-profit that inspires and educates the next generation of filmmakers and honors the heritage of the motion picture industry. He has served as AFI’s CFO for over 6 years, and is responsible for all financial operations within AFI and their endowment. Previous to his work at the American Film Institute, Lang served as Senior Vice President at Guthy-Renker. Lang started his career at the Walt Disney Company, serving in a variety of corporate and regional finance positions in the United States, Europe and Asia-Pacific.

While earning his degree at CSUN, Lang was the University Student Union President and served as Vice Chairman of the Student Union Board of Directors.

Wayne Stelmar '76 (Business Administration) serves as a Board Member and Corporate Advisor for The New Home Company. As one of the founders and in his previous position as Chief Investment Officer until his retirement in 2017, Wayne directed The New Home Company’s strategic planning activities with a special focus on land acquisition and land disposition. He began his career in public accounting at Grant Thornton where he became a CPA. Wayne left Grant Thornton in 1985 to pursue his passion for real estate and joined Kenneth Leventhal. In 1988, he joined the Watt Companies and served as the Chief Financial Officer of Watt Residential Partners. In 1998, the company merged with UK based John Laing Homes. In 2006, he led the sale of John Laing to Dubai based Emaar Properties where he continued as CFO. Wayne, along with three peers, founded The New Home Company in 2009, and as CFO led the effort which resulted in NWHM becoming a public company listed on the NYSE in 2014. He retired from The New Home Company in 2017 but remains on its Board.

About the Nazarian College Advisory Board