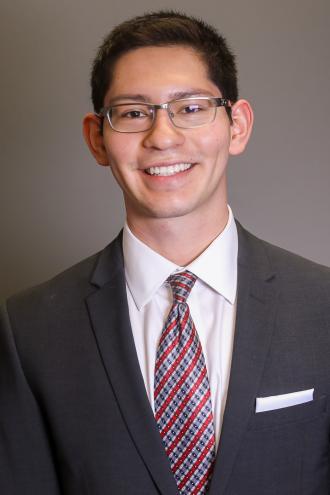 “I am humbled to be selected as CSUN’s 2021 Wolfson Scholar Award recipient,” said Bustos. “CSUN has provided me with tremendous opportunities to develop academically, professionally, and personally. Over the past few years, I have had the chance to work alongside distinguished professors, receive mentorship from highly impressive alumni, and create life-long friendships. As a proud CSUN alumnus, I am passionate about giving back to the next generation of CSUN students and graduates in any way that I can.”

Presented annually in memory of Leo Wolfson, CSUN’s first vice president, the award is granted to students who have an exceptional academic record and have made significant contributions to CSUN or the community through extracurricular activities.

Bustos started his college career at Glendale Community College, where he studied Accounting and played baseball until an injury in his first year left him unable to pursue the sport further. Rather than let this setback hinder him, he decided to secure his first internship at a virtual reality startup and continued to excel academically. He enrolled at CSUN just a few months later and was accepted into the Business Honors Program. It was here that Danny served as the Business Honors Association’s President for the 2018-2019 academic year, and helped connect current Business Honors students to alumni in a number of fields. He also contributed to the success of a CSU Big Data project titled “CalStatePays” under Dr. Richard W. Moore. Bustos will graduate Summa Cum Laude with a triple major in Accountancy, Finance, and Business Honors with a 3.97 overall grade point average.

“I am incredibly thankful for all of the opportunities that CSUN has provided me,” said Bustos. “I recognize the value CSUN places on educational and career development, and I will do what I can as a proud CSUN alumnus to create a stronger path for the next generation of CSUN graduates.”